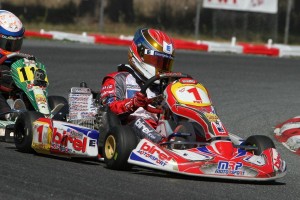 Racing, competing and spending time at the race track with family and friends is exactly the way 12-year old Nick Brueckner wanted to spend Valentines Day weekend this year. As part of a very busy month of February, Brueckner and his family returned to the Ocala Gran Prix for the second week in a row to contest two rounds of the Florida Winter Tour Rotax Max Challenge. Competing in the Mini Max as well as the Junior Max category, Nicholas put in another weekend of hard work and solid racing. The young Texan ran with some of the best competition in karting today, gaining a wealth of knowledge and invaluable experiences moving forward in his racing career.

Saturday was a battle from the start in round three of the Mini Max category after Nicholas could only muster up one lap in qualifying with a technical issue putting him on the sidelines early. That placed him 32nd overall and into the Last Chance Qualifier race. Clean through the opening laps, Brueckner drove to a four-second win to place himself at the back of the Prefinal grid. Nicholas continued to climb up the leaderboard each lap, reaching the ninth position. Running as high as sixth in the main event, Brueckner finished with a 10th place result in what could have ended much worse following qualifying on Friday.

Sunday’s qualifying effort was more reflective of the pace and talent Nicholas brings with his MRP Motorsport/Birel America entry each and every weekend. Brueckner was fifth in the timed session on Friday, allowing for a row three starting position in the prefinal. The young Texan drove a smart race, not making any wrong moves or poor decisions, placing in the fifth spot to set up for a run at the podium in the final. The Mini Max main event was terrific for Brueckner as he vaulted himself all the way to the second position on the opening lap. From there, Nicholas fought to stay within the top-four for the next couple of laps, but would shuffle back to sixth by the checkered flag. Following the race, he was assessed a four position penalty for a driving infraction, which put Brueckner 10th in the final order. The result, not as hoped with the penalty, still gave Nicholas his fourth straight top-10 finish of the season in Mini Max.

Pulling off double duty, Brueckner contested the Junior Max in addition to the Mini Max action. Both categories have proven to be extremely competitive this year, especially in qualifying. Despite qualifying only two tenths of a second away from the pole position on Saturday Nick found himself sitting in the 15th position. Brueckner gained positive positions in the prefinal, earning an 11th place starting spot for the final. A terrific start in the main event put Nick in the seventh position as the lead pack completed the opening lap. He spent the first half of the race within the top-10 until contact dropped him back out of the top-15 on lap 10. Nicholas fought back to move forward to the 13th position at the checkered flag, recording his best Junior Max finish in the series.

Sunday was an improvement in his qualifying position, up two spot to 13th as he was still just 17 hundredths off the fast time in the session. The issue starting that far back, is being subjected to a poor start. That turned out to be the case in the prefinal as Brueckner was involved in an opening lap wreck, where a driver spun in front of him. Hitting head on, Brueckner walked away with a couple of bruises and was out of the race. Great work by tuner Tim Lobaugh had his Birel kart ready to go for the main event, starting from the tail of the field. Nicholas refused to give up and proved how strong he can be once the helmet went on. With the entire Junior Max field running lap times within a few tenths of each other, gaining positions was a battle and Brueckner was up to the challenge. After 22 laps, he moved up to the 25th position to complete the weekend. Adversity has been the biggest hurdle throughout the early portion of the season, but the young Texan is primed to come back to the series finale in March at the Orlando Kart Center with his best results to date.

Brueckner returned home to Hockley, Texas for a short couple of days before heading to the second weekend of the Rotax Challenge of the Americas at the Phoenix Kart Racing Association in Glendale, Arizona. Nicholas will contest the Junior Max category, where he looks to rebound from two tough main event results at the opening rounds in Tucson after the Birel driver showed the pace to contend for a top-five finish. His first podium finish is the goal for the weekend at the Challenge.

Be sure to follow Nick’s progression throughout the weekend live on the Internet. Tune into the eKartingNews.com Live broadcast, beginning Friday, February 21 with the final round of practice. Round three is scheduled for Saturday including qualifying, prefinal and final, with Sunday hosting round four.

Racing out of Hockley, Texas, Nicholas Brueckner is a name you will be hearing more throughout the karting ranks in the coming years. At 12 years of age, Nick has spent less than four years in the sport, and has racked up impressive results and experience. From winning the Micro Max class at the 2012 U.S Rotax Grand Nationals and Mini Max championship in the 2013 Florida Winter Tour, to racking up wins at home in the SKUSA Texas ProKart Challenge, Brueckner is climbing the ladder quickly. Nick’s talents are far from being limited to just behind the wheel, however, as he is excelling academically, earning straight-As along with showing great leadership and people skills. Supporting Nick in his racing endeavors is the MRP Motorsport/Birel America team, Jose Castro/CMW Engines, Oakley Sunglasses and Savage Design.