Rain no match for Malukas 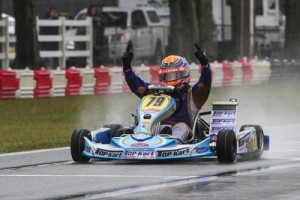 Malukas crosses the stripe a winner in the rain at Ocala
(Photo: Ken Johnson – Studio52.us)

David Malukas and the HMD Trucking team wrapped up consecutive weeks
of racing this past weekend at Ocala Gran Prix in Ocala, Fla., where round two of
the Florida Winter Tour’s (FWT) Formula Kart Series went off February 7-9 and the
second round of the Winter Tour’s Rotax MAX Challenge was held this past weekend.

Malukas opened the consecutive weekends at Ocala in fine fashion with a TaG Junior
main event triumph Saturday, Feb. 8, in the rain at Ocala. The win marked Malukas’s
second of the 2014 FWT Formula Kart campaign after scoring the big win at the Sunday
round at Homestead-Miami Speedway in January.

David was denied of win No. 3 in a row in the TaG Junior class Sunday, Feb. 9 at
Ocala. While he didn’t score the victory, the Chicago driver wheeled his Comet-built
Parilla Leopard-powered Top Kart to a fine second-place result to Mathias Ramirez.

Leaving round four of the Formula Kart Series, David is the current TaG Junior points
leader with only rounds five and six of the series remaining this March at the Orlando
Kart Center. Heading to Orlando, Malukas is 51 points ahead of Top Kart USA teammate
Zach Holden in the TaG Junior division.

David returned to his Chicago home following the Formula Kart weekend, only to turn
around and return to Ocala Thursday, Feb. 13 for rounds three and four of the FWT
Rotax MAX Challenge.

With many of the best Junior Rotax racers in the world in attendance, Malukas was
competitive throughout the weekend.

In Saturday’s competition, David opened the weekend with a strong sixth-place qualifying
effort of 46 racers to take time. An incident in the Rotax Junior pre-final negated
David to a 27th-place finish. David rebounded by racing his Top Kart from 27th to
a solid 11th-place finish in the day’s 22-lap Rotax Junior final.

Sunday’s Rotax Junior competition didn’t open as strong as Saturday’s. With Saturday
and Sunday’s programs’ qualifying taking place Friday, Malukas entered Sunday with
a 16th-place starting spot in the pre-final. David wasn’t able to make up any positions
in the pre-final, in fact, he lost one spot and came home a disappointing 17th.
But after two long weekends of 2-cycle sprint racing at Ocala, the finale – Sunday’s
Rotax Junior final – saw David soldier to an impressive eighth-place finish in the
incredibly strong Rotax Junior field.

David now enters round five and six of the FWT Rotax MAX Challenge sitting seventh
of 47 entrants in the Rotax Junior point standings.

David talked about his consecutive weekends of racing at the 0.6-mile Ocala circuit.

“We were really happy to get the win and a second at the FK races. We would have
liked to run a little better at the Rotax weekend. We had good speed, just a couple
of problems held us back from better finishes. It was nice to end the weekend with
a top-10 run. These Rotax events are so competitive; thanks to my dad, my tuner
Wes Phillips, Top Kart and of course HMD Trucking,” David said.

Next up for Malukas are the aforementioned Florida Winter Tour Formula Kart and
Rotax season finales in March at Orlando Kart Center. The Formula Kart series will
close March 14-16 while FWT Rotax will close its season March 20-23.

David will be looking to close out a Formula Kart TaG Junior championship, and improve
his current seventh-place position in the Rotax Junior standings.