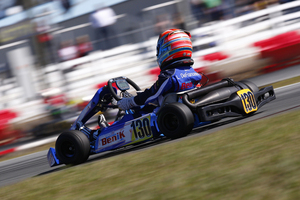 Continuing their march towards success, BENIK Kart once again, made their presence felt at rounds three and four of the Formula Kart Productions Florida Winter Tour held at the Ocala Gran Prix facility in Ocala, Florida. With drivers on track during both the Formula Kart and Rotax Max Challenge weekends, BENIK Kart managed to secure three pole positions and one heat race win.

Taking the Rotax weekend by storm, Rotax Mini Max driver Lachlan DeFrancesco was a man on a mission. Showing the true speed of the BENIK chassis during Friday’s qualifying sessions, DeFrancesco managed to secure the pole position for both Saturday and Sunday’s wheel-to-wheel action with a pair of blistering laps in two different on track sessions. Though the end results were not what they had hoped for, DeFrancesco and BENIK Kart were happy with the speed of the overall package.

“I think a lot was proven during the Rotax weekend,” explained Nick Mitchell, Co-Founder of BENIK Kart. “The Mini Max class was the largest of all the divisions and the competition was second to none. It was nice to see a BENIK Kart lead the field to the green flag after sweeping both pole positions.”

Joining DeFrancesco in the Mini Max category would be nine-year-old up-and-coming driver Derek Carmenate. Again showing great speed throughout the weekend and turning lap times as quick as the leaders, Carmenate would have no racing luck as incidents would take him out of contention on both days of competition.

In the Rotax Micro Max ranks, it was Jo Nunez that would steer a BENIK Kart near the front of the field, as a second place qualifying effort would turn into a solid fifth place result at the end of the day. Assembling his new BENIK Kart only one week before the event, Nunez looked to have a podium result in his grasps on Sunday as he was the third driver to cross the stripe, but a penalty for an incident on the final circuit removed him from the third step of the podium.

Javier Gonzalez would be part of the BENIK Kart squad on the Formula Kart weekend and would show his speed in the TaG Junior field. After qualifying on the pole position and taking a heat race victory, Gonzalez would be the second kart to the line in Saturday’s final but a start line infraction sent him down the running order.

With a few weeks off, BENIK Kart will begin preparations for the final rounds of the Florida Winter Tour. Taking place at the Orlando Kart Center in Orlando, Florida, BENIK Kart will look to finish the series strong and gain momentum as they enter the second half of 2014.

For more information on Benik Kart, please contact Nick Mitchell or Ben Cruttenden via e-mail toInfo@Benik-Kart.com or by phone at 754.206.4870. Benik Kart can also be found on Facebook atwww.facebook.com/BenikKart and Twitter at @kartBENIK.