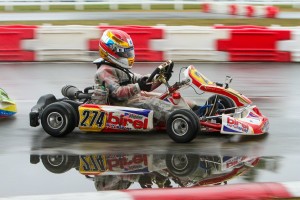 Junior karting rookie Nick Brueckner began what is scheduled to be a busy month of February, competing in the second weekend of the Florida Winter Tour Formula Kart series at the Ocala Gran Prix. Brueckner contested the TaG Junior division at the Ocala, Florida facility where it was another three days of education on and off the track as the first year Junior pilot continues to adjust to the higher speeds and heavier karts. The MRP Motorsport/Birel America pilot posted top-10 results in the two rounds on the February 7-9 weekend.

The practice rounds were solid for Brueckner, as he seemed to be on pace with the rest of the front-runners. Due to a technical issue, Nicholas was unable to complete a lap in qualifying, and would have to start the first heat race from the tail of the field. Despite a poor starting position and falling rain, the young Texan would not be rattled as he has performed very well in races. Brueckner got a terrific start to the opening heat race that vaulted him to 14th on the opening lap, gaining one more position before the checkered flag fell and two more after penalties following the race. Brueckner started heat two on the pole position with the staring grid inverted for the second round of racing. Leading the first four laps, Brueckner was spun by another competitor in the wet conditions, which dropped him down to seventh. He was able to gain one more position before the end of the 14-lap race. The results landed Nicholas inside row four for the main event grid. Brueckner completed Saturday’s feature race where he began, in the seventh spot after fighting a tough field and challenging conditions for 18 laps. Overall, it was a great recovery from two misfortunes on the day, which shows the character the young driver possesses.

The rain went away, and the sun returned to Ocala for Sunday’s action. The pace in TaG Junior also is incredibly close, and Sunday’s qualifying session was no different with the top-11 drivers separated by just half a second. Posting a 37.763-second lap time – four tenths of a second off the pole – place Brueckner’s Birel ninth on the grid for the first heat race. Nicholas went to work quickly gaining four positions by the end of the opening lap. He ran as high as third before settling into the fifth position. Unlike Saturday, the inverted grid for heat two worked against him, starting outside the top-10 and getting shuffled back to 15th in the order. Brueckner’s two heat race results placed him 11th on the grid for the final feature race of the weekend. A great start once again by the young driver placed him sixth after the opening lap. The overall race-pace however was not in the cards, as Nicholas dropped down to 10th in the order, classified ninth in the final tally.

“Four straight top-10 finishes is a good start to the year, but we were hoping for better results to this point,” stated Brueckner. “The TaG Junior class is very competitive, and it’s something new to me with the tires and engine package. I’ve learned a lot over the first two weekends and I think a podium next month is possible.”

Brueckner first must focus on the toughest weekend of the month coming up on February 14-16. A return to Ocala for the second stop of the Florida Winter Tour Rotax Max Challenge program will see Brueckner race in the Junior Max and Mini Max divisions. The defending Mini Max champion sits fifth after a podium finish in round two back in Homestead, while improvement is the goal in the Junior Max category after a tough debut last month.

Be sure to follow Nick’s progression throughout the weekend live on the Internet. Tune into the FWT Live broadcast, beginning with Friday, February 14 with two rounds of qualifying. Prefinal and Final events for rounds three and four are scheduled for Saturday and Sunday.

About Nicholas Brueckner:
Racing out of Hockley, Texas, Nicholas Brueckner is a name you will be hearing more throughout the karting ranks in the coming years. At 12 years of age, Nick has spent less than four years in the sport, and has racked up impressive results and experience. From winning the Micro Max class at the 2012 U.S Rotax Grand Nationals and Mini Max championship in the 2013 Florida Winter Tour, to racking up wins at home in the SKUSA Texas ProKart Challenge, Brueckner is climbing the ladder quickly. Nick’s talents are far from being limited to just behind the wheel, however, as he is excelling academically, earning straight-As along with showing great leadership and people skills. Supporting Nick in his racing endeavors is the MRP Motorsport/Birel America team, Jose Castro/CMW Engines, Oakley Sunglasses and Savage Design.