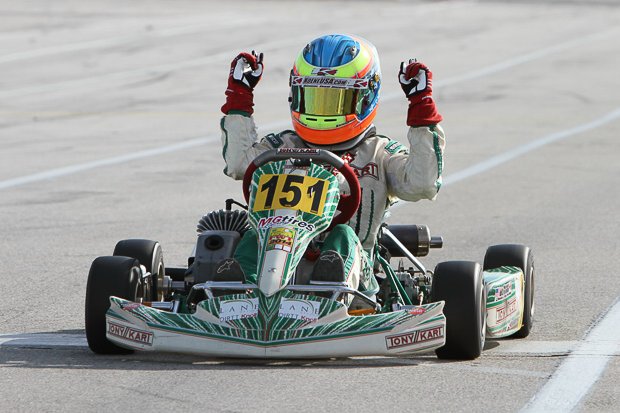 Michael d'Orlando drove to double wins in the TaG Cadet division to open up the Florida Winter Tour (Photo: Studio52.us)

In a blink of an eye, the first month of 2014 has come and gone. Many throughout the country are battling the blues of winter weather, with the exception of a few states missing out on the snow storms that have hit the warmer areas of the country. The weather however was perfect for racing at the Homestead Karting facility in January, as the Florida Winter Tour program kicked off its 2014 program for both the Formula Kart and the international Rotax Max Challenge. From the two weekends, the hottest driver on-track was New York’s Michael d’Orlando – who has been named the eKartingNews.com Driver of the Month for January 2014.

The soon-to-be 12 year old nearly swept the opening two rounds of the TaG Cadet championship at the Florida Winter Tour opening weekend. He along with brother Nicholas were 1-2 the entire time. The following weekend, Michael was a contender in the Mini Max division, placing runner-up in the opening round and was in contention on Sunday until an issue in tech removed him from the results. Despite the set-back, d’Orlando is prepared to take the season by storm.

The only driver to even challenge Michael throughout the TaG Cadet weekend was his brother Nicholas. The two brothers were 1-2 in qualifying for the opening round in Homestead, as Nicholas held a two-tenth advantage to secure the pole position. Michael stayed in line for the first heat, taking over the top spot at the halfway mark as the brothers ran 1-2 with a two-second gap over third. Nicholas led again to begin heat two, this time with Michael stealing the lead after three laps, pulling away to a 1.2-second advantage over Nicholas. Michael was able to get away clean at the start of the main event, while Nicholas shuffled back to fifth. This allowed Michael the chance to pull away early, as he stretched out to a 2.4-second margin of victory over Nicholas.

Michael started Sunday’s round two action where he left off, at the top of the time sheets in qualifying. He was just over a tenth quicker than Nicholas for another 1-2 in the timed session. Nicholas however got the jump on Michael, as he slipped down the order for heat one. The younger of the two d’Orlando brothers scored the race win while Michael drove his way back to second – the only blemish in the points race for the weekend. Michael went on to edge out his brother for the win in heat two, and followed it up with his second main event victory of the weekend, while Nicholas finished an impressive weekend of his own to place runner-up once again.

The two drivers entered the second stop of the Florida Winter Tour 1-2 in the point standings. Michael kept up his win streak, going on to win both main events once again to nearly clinch the title after the first four rounds. Michael, along with his brother, are set for a busy 2014 season. They will complete the Florida Winter Tour, racing in both the Formula Kart and Rotax Max Challenge weekends. The 2013 US Rotax Grand Nationals champion is set to defend his crown, this year at the MillerMotorsportsPark. The duo – racing under the Koene USA banner – will also contest the Superkarts! USA Pro Tour in the TaG Cadet division 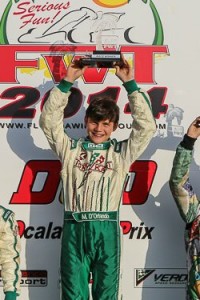 Chassis: Tony Kart
Engine/Engine Builder: KoeneUSA
Sponsors: Lane Office, The Graphic Department, Integrity Consulting Group, Oakland Valley Race Park, Mom & Dad
Series You Compete In: US Rotax Max Challenge – Northeast Region, Superkarts! USA Pro Tour, Florida Winter Tour
Years Karting: 6
How did you get started in karting? At about 3 years old I remember watching NASCAR and thinking it was cool and wanted to be a race car driver. I told my parents and they bought me and my brother Peg-Perego battery operated vehicles. We wore a track into the yard. So in order to grow the grass back my parents took us Oakland Valley Race Park. I had so much fun karting there and wanted to continue because I love it. I felt proud when I got a trophy and I wanted to do what ever it takes to get really good at it.
What has been the high point in your racing career? Winning US Rotax Grand Nationals. That really stepped up my game. I knew I could do better and get more competitive and now I’m more dominant.
What are your goals in racing? To be in F1 on the Red Bull team because it’s my favorite drink and team. I want to grow up to be like my racing idol Sebastian Vettel who is young, fast and winning championships.
In a few words, how would you describe your driving style? My parents say I’m a finesse driver, whatever that means. My coach says I’m a conservative driver, but I think I’m calm, aggressive and fast.
Funniest moment at the race track? When I flipped in Ocala a few years ago. I was coming into the corner at around 45 mph and a guy hit me in the side pod and flipped me. We actually looked each other in the eyes while I was upside down.  I landed right side up. It was pretty funny to me, but not to my Mom who was there watching.

What do you do when not at the track? Think about the track. Also, I play basketball for my school and run cross country.
What are your goals outside of karting? I’m serious about making racing my career, so my goal is to race cars. And, do the best I can do in school so I can be smart for my racing career.
What type of street car would you like to drive? Bugatti Veyron SuperSport
What are your pet peeves or things that irritate you? A kid in school who steals lunches. He also talks in class and wastes our time.
What do you think could be done to improve the sport of karting? Have standing starts and a reverse gear.
What are your favorite aspects about the sport of karting? Speed, competitiveness, and WINNING! I love taking the checkered flag.