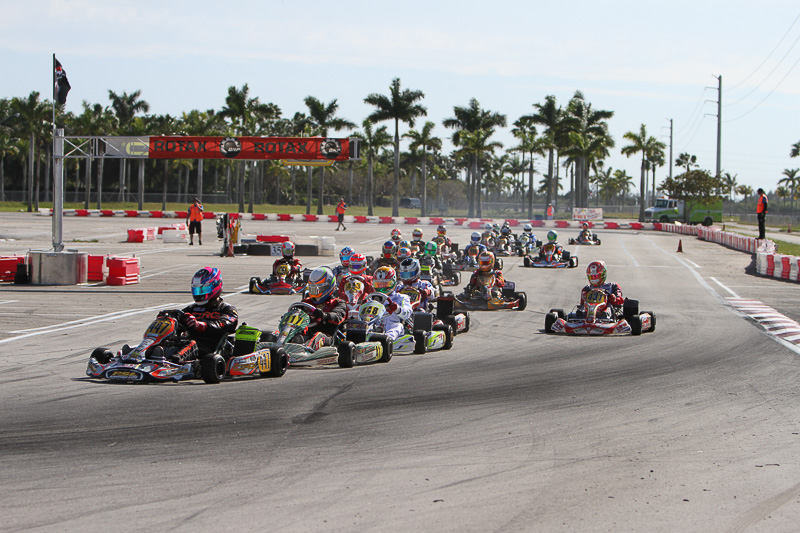 This weekend the Rotax competitors of Formula Kart Production’s Florida Winter Tour, presented by Ocala Gran Prix, roll into the exemplary Ocala Gran Prix facility to contest the middle two rounds of the 2014 FWT Rotax MAX Challenge season. After a thrilling start to the season in Homestead the action is set to kick up another notch, as everyone’s 2014 race packages are starting to get sorted out.

With this being OGP’s “home stadium” one would expect good things from them. Indeed, with drivers like former FWT and reigning U.S. National Champion Oliver Askew (USA) in Senior MAX and multi-time FWT and U.S. National Champion Nick Neri (USA) in DD2, their presence will be felt all weekend. But lest anyone thinks they will have things their own way, with more than 243 unique drivers from 22 countries already participating in the 2014 FWT RMC, including multiple former and reigning Rotax and CIK World Champions, there will be plenty of world class competitors in the mix.

Drivers like three-time Rotax World Champion Ben Cooper (Canada) and CRG factory ace Jordon Lennox (UK) will make the battles in MRP Motorsport’s sponsored Senior MAX even more interesting. In SH Racing sponsored DD2, current DD2 World Champion Simas Juodviršis (Lithuania) will be looking to improve his standing in the championship to get up into the points battle with Neri and CRG’s Daniel Formal (USA).

In PSLKarting.com’s sponsored Junior MAX class, the largest class this weekend at the FWT RMC, OGP’s Austin Garrison (USA) looks to continue the momentum from his excellent weekend in Homestead. Hot on his heels in points are Pedro Cardoso (Brasil), Austin Versteeg (USA) and Ryan Norberg (USA), all of whom are expected to be contending for victory on the exemplary OGP circuit.

In AM Engines sponsored Mini MAX and GT7 Motorsports sponsored Micro MAX, the youngest of the Rotax competitors will be as entertaining as usual, proving yet again that drivers of all ages can put on a great show. In Mini MAX, all eyes will be on Gianluca Petecof, to see if he can pull off another double win weekend like he did in Homestead. As in Homestead, defending FWT Mini MAX champion Nick Brueckner (USA) will be pulling double duty in both Mini MAX and Junior MAX as he looks to move up the points table in both. After splitting the wins in Homestead, Micro MAX drivers Arias Deukmedjian (USA) and Reece Gold (USA) look to continue their battles in Ocala.

In the two classes for the more experienced competitors, Rolison Performance Group sponsored MAX Masters and Decal Zone sponsored DD2 Masters, Luis Schiavo (Venezuela) really had things going his way in Homestead, winning three of the four event finals in both classes. In fact, the only driver to top Schiavo in any of the races was Derek Wang (USA) who came home the winners in Saturday’s DD2 Masters final. Will Schiavo be able to continue his domination of the Master’s classes? Or will other winners emerge?

AWARDS
The Florida Winter Tour has a long tradition of providing some of the most sought after awards in karting, and that continues in 2014. The FWT’s contribution of sending top drivers to the Grand Finals is well established with multiple Rotax World Championship wins. This year, there are five spots available to be awarded through the FWT. The available spots are one each in Junior MAX, Senior MAX, and DD2. There will be two DD2 Masters “tickets” available, which will be awarded to the champions in DD2 Masters and MAX Masters.

NATIONS CUP
As previously mentioned, Luis Schiavo has a leg up on winning either the DD2 Masters Grand Finals ticket or the MAX Masters ticket. And while he’s amassing points towards that goal, he’s also racking up a lot of points for Venezuela in the Nations Cup. Coming into the Ocala weekends, Venezuela sits an impressive third in the Nations Cup standings behind powerhouses United States and Canada, and just ahead of their South American neighbors Brazil and Columbia.

MANUFACTURERS CUP
In the Manufacturers Cup standings, CRG and Tony Kart have once again found themselves locked in a battle for the top spot. However, Birel and AM are right in the mix with the green and black karts and everyone expects this battle to go down to the last day in Orlando.

FWT / DAN WHELDON KARTING AMBASSADORS AWARD
Perhaps the most special award to be handed out at the Florida Winter Tour this year is the Dan Wheldon / FWT Karting Ambassador award. Dan was a member of the FWT family and a true inspiration in the sport.  He was the epitome of someone who loved karting and was a ferocious competitor. Yet, his appreciation for the sport drove him to give back to others, and to foster growth in the sport he loved. 2014 will see the third recipient of this coveted award and we want you to tell us who you feel is worthy and why. Please send your nominations to live@FloridaWinterTour.com.

As with all the FWT Rotax events qualifying for the weekends races will take place on Friday. This coming Friday also happens to be Valentine’s Day. So, for those of you looking for that special gift that your significant other will always cherish, bring them to Ocala for some hot on-track action. Or, for those that can’t make it, nothing says romance like curling up with the one you love in front of your computer to watch the action as it happens on FWT LIVE!, karting’s original streaming broadcast with live timing and audience interaction.

As always, while watching FWT Live! you can also send words of encouragement to your favorite drivers by emailing the broadcast team at live@FloridaWinterTour.com.

With the completion of the Ocala rounds we’ll be two thirds of the way through the 2014 season and looking to crown our champions. As such, this coming weekend is critical to the standing in all divisions. Whether you’re watching the action on FWT LIVE! or if you’re fortunate enough to join us at Ocala Gran Prix, This is one weekend of racing you do not want to miss!