Florida Winter Tour Drivers Race in The Rain at Ocala 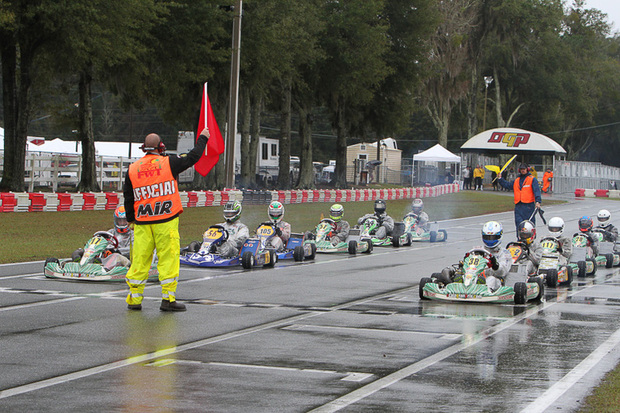 The exemplary Ocala Gran Prix karting circuit was alive with action on Saturday February 8 as the competitors of Formula Kart Production’s Florida Winter Tour, presented by Ocala Gran Prix, kicked off the third of six rounds for the 2014 FWT Formula Kart Racing Championship season. With this weekend being the middle rounds of the championship all the drivers were looking to take their shot to move up the Championship Points leader board.

For a racing program with the word “Winter” in its name, it’s actually a rare day that the Florida Winter Tour experiences weather that isn’t warm and sunny. On this day, however, warm, dry jackets were more than just a good idea as the rain would come and go throughout a very cool, by Florida standards, day. But the fact of the matter is you’d be hard pressed to find a competitive racing driver that does not enjoy the challenge of racing wheel-to-wheel in the rain. 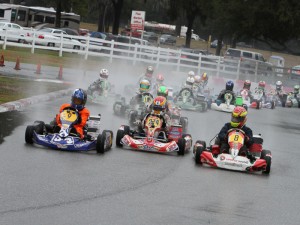 Although the teams and tuners found the conditions to be a challenge, for the 103 drivers, and especially for the spectators, it was a very entertaining day filled with great racing action. When all was said and done the drivers who made it onto the podium to collect their FWT Palm trophies could hold their Palms up high knowing they persevered and excelled against some of the toughest competition they’ll ever see, in very challenging conditions.

One driver that can be counted on to contend in all types of conditions is Orlando, Florida’s Daniel Formal. Formal has honed his fluid and fast driving style over years of competition at the Florida Winter Tour, and over those years has amassed several FWT and U.S. National karting championships. Last year Daniel won the coveted FWT / Skip Barber Car Racing Scholarship Award and took a moment out of his race day to tell us about his time racing the Skip Barber Mazda MX5 cars. “It really was a great experience,” he said, “The whole crew at Skip Barber really understand racing and were very helpful.”

Through his award package Daniel was able to compete in four races, two each at Palm Beach International Raceway and Sebring. His years of karting paid off as he handily won three of the four races, the last of which he won by over 35 seconds. For Daniel this was an important step in his quest to become a professional racing driver. Another step in that process was realized early this year when he was signed as an Official CRG Factory Driver. After the Florida Winter Tour concludes Formal will be moving to Europe for six months to compete in Rotax and KZ2 European and CIK World Championship events. No matter where he races, we’ll always consider Danny part of the FWT family and we are excited to see where his talent and ambition take him.

Formula Kart Productions racing events have a worldwide reputation for impeccable organization and precision. For the past several years much of the credit in this regard goes to Ocala resident Glenn “Bigg Daddy” Biggs. Glenn is the Chief Steward of the Florida Winter Tour and it’s his job to oversee all the on-track action and coordinate communication between the corner workers, stewards and tech inspectors. Glenn says that having years of experience as a driver has been a big help because he can use his knowledge from his time in the seat to make decisions that are both fair and impartial.

Glenn says karting has given him so much that he wants to give back. To that end, he’s putting his resources where his mouth is and has undertaken the responsibility of creating his own racing series, The Florida Prokart Series. Glenn’s racing program will begin this April in Homestead and comprise of two more weekends of racing at the Palm Beach karting facility, then a finale back at Homestead. He says FWT owner Bill Wright has been a big help in getting him up and running. Glenn says, “Bill’s been like a brother to me. Whenever I’ve had a question along the way he’s been there with straight advice to get me pointed in the right direction. I really couldn’t have done this without him.”

When at home Glenn spends his time with his wife, two sets of twins ages three and five, and over 100 ball pythons. While that may seem like the makings of a reality TV show to some, Glenn says he prefers life the way it is and does not seek the spotlight. For Glenn Biggs true satisfaction comes from hard work and dedication to whatever needs to get done.

After a brief morning warm up, the competitors of the Formula Kart Championship assembled for the qualifying sessions that would precede their heat races. Leading the way in Formula TaG Cadet qualifying was Sebastian Rodriguez (Columbia) whose lap of 48.461 was 0.128 faster than second quickest Kaylen Frederick (USA). Going into the heat races, the rain was a significant factor. Lochie Hughes (Australia) and Kaylen Frederick mastered the difficult conditions to perfection to split the two heat race wins.

Hughes would start the TaG Cadet final from pole, but it was Arias Deukmedjian (USA) who assumed the early lead. During the first half of the race a four-kart train at the front began to break away from the pack. After originally qualifying seventh, Homestead double race winner Michael d’Orlando (USA) was steadily making his way up through the field in the heat races and into the final. Just past half-distance in the final d’Orlando made his break for the lead and never looked back.  As the checkers waved he was 3.045 seconds to the good over Tyler Gonzalez (USA) and Matthew Latifi (Canada). 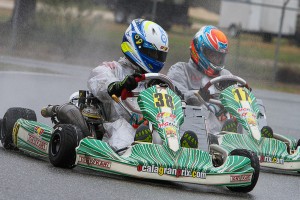 With the increase in shifter kart entries for Ocala the decision was made to split the karts up into two groups. First up were the Formula Stock Moto and Open Shifter karts. In Formula Open Shifter, Max Di Bella (USA) and Collin Daley (Jamaica) had a battle amongst themselves that was eventually settled when Max took the win in the final.

The Formula Stock Moto class saw an impressive battle amongst some really top level competition. Leading the way in qualifying was Oliver Askew (USA) whose lap of 44.141 was 0.311 faster than second place Nick Neri (USA) who was fighting a severe cold. The first heat race was won by Oliver over Nick with Nick getting the best of Oliver in Heat #2. As the karts lined up for their final, it was anyone’s race.

At the start of the final Oliver was on pole, but stalled the kart as the lights went out, allowing Nick Neri to sprint into the lead. Nick’s OGP teammate Kyle Kirkwood (USA) got a lightning start and eventually worked his way to second after a spirited battle with Canadian Matthew DiLeo, who put in another strong performance to round out the podium in third. After falling back in the pack at the start Askew blitzed through the field to fourth at the finish, falling just short of the podium, but leaving us with anticipation for another great Stock Moto race on Sunday.

OTK USA’s Andre Martins was on hand again to promote the Vortex RoK shifter package and he did it in fine style by setting the fastest qualifying time of 45.736 seconds. In Masters Shifter Heat #1, it was Orlando, Florida’s Vicky Brian that took the win over Ariel Castro (USA) by 1.073 seconds. In Heat #2, it was Martins taking the win with Ariel grabbing his second runner up finish.

Going into the final, two second place finishes in the heats put Castro in the best spot to make the run down to turn one at the standing-start. But, try as he might, it was Brian who got her start absolutely perfect and Ariel and the rest of the field set into turn one chasing her. Vicky would lead the first two laps, with Castro and Martins chasing. After a spirited battle that saw Martins spinning off, Castro set off after Brian, and quickly got by. A subsequent spin late in the race dropped Brian down to fourth at the finish, leaving Kurt Matthewson (USA) and Petr Ptacek (Czech Republic) to stand with Castro on the podium in second and third respectively. 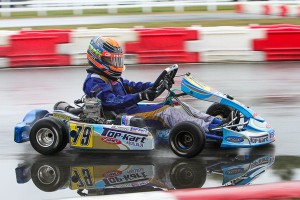 David Malukas was the class of the field in Formula TaG Junior on Saturday.
(Photo: Ken Johnson – Studio52.us)

TaG Junior qualifying was led by Virginian Matt Solarczyk who set a fast time of 45.584 seconds on the rain soaked OGP circuit. In heat #1, David Malukas (USA) continued his winning ways from Homestead to take a dominating win over Zach Holden (USA). In heat #2 Malukas was still on top of his game as he had another 3.6 second win, this time over Solarczyk.

In the Formula TaG Junior final, Top Kart mounted David Malukas again made short work of the competition and once he assumed the lead he was unassailable. Early in the race it was Christian Munoz (USA) and Holden who gave the initial chase of Malukas. During this time Solarczyk was moving through the pack and eventually moved into third over Holden. In the end, the podium was Malukas in first, Munoz second and Solarczyk third.

In TaG Senior qualifying, American Dan Roeper proved his decision to switch from Tony Kart to Birel was a good one as he set pole position with a quick lap of 45.847 seconds. Roeper and Daniel Formal would split the TaG Senior heat races to make up the front row of the final. As the TaG senior final got underway the rain had stopped, but the track was far from dry, and this made for a great race start.

Canadian Zach DeMelo got a great start to grab the lead. However, by turn seven Roeper was back on top. By the second lap the rain made another appearance and this jumbled the order of the pack as the drivers fought for grip. This led to some intense racing, with many position changes over the first half of the race. During the ensuing laps AJ Myers (USA) and Joffery Amaya (USA) made their way up to second and third respectively to round out the podium behind a dominant performance by Dan Roeper in the difficult conditions. 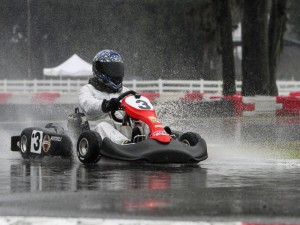 In Formula TaG Masters, Miguel Gransaull (USA) and Peter Pestano (USA) would battle each other and the TaG Senior karts all day long. In the end it was Gransaull who would prevail to stand atop the podium as the day’s Tag Masters race winner.

And so ended a very challenging and uniquely satisfying third round for the officials and competitors of the Florida Winter Tour Formula Kart Championship. As of this writing, Sunday’s weather forecast is for sunny skies and highs in the 70’s. We’ll get to see who can make the best adjustments as the officials and competitors prepare for “normal” conditions at the FWT. As the fourth of six rounds on the championship, it’s a critical day for the competitors. Be sure to catch all the action on FWT LIVE!, the sports original live broadcast with audience interactivity and live timing.