Milne and Diaz lead team drivers in champions at Buttonwillow

The 2013 season was big for Team Aluminos, as the NorCal-cased karting operation launched its own chassis and won a number of major events. Victories in club, regional, national and international competition fueled incredible momentum and high expectations for this year’s campaign. ‘Off-season’ preparations were non-stop, as the squad was focused on coming out of the box strongly.  Fully-prepped, Team Aluminos kicked off their new season this past weekend at the opening round of the Superkarts! USA California ProKart Challenge, firing up a schedule that will see them run both the PKC and the SKUSA Pro Tour. Rob Soares and his Aluminos squad enjoyed a successful weekend at the ButtonwillowRacewayPark as their drivers ran near the front, all aboard the team’s Aluminos chassis.

Team Aluminos got the weekend rolling in style early Saturday morning when Colorado’s Cory Milne laid down a 44.244-second run in qualifying to earn the S1 Pro Stock Moto pole. In the first heat, Milne rebounded very well from a slow launch off the grid to drive back to a solid third place finish.  The second heat race went well for Milne, as he remained in the top-five to earn a spot on the outside of row two to start the main event. Cory was shuffled back at the start, but the pace of the Aluminos chassis was strong throughout the 20-lap distance, which gave him the ammo he needed to steer himself back to a fourth place finish, posting the fastest lap in the S1 category.  It was a great start to the season for the sophomore Pro pilot.  Former PKC frontrunner Brad Dunford made his return to Team Aluminos in Buttonwillow after a year away from the sport. A DNF in heat one put him behind the eight ball, but Dunford gained back a few positions in Heat #2 and improved a couple more spots in the main event to end the day with an eighth-place result in his return to the seat. 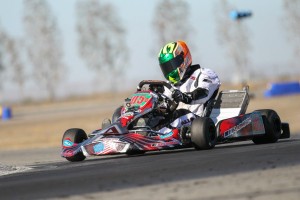 Will Preston is enjoying the move to both the S2 Semi-Pro Stock Moto category and the Aluminos chassis. Making his debut at the SuperNationals, Preston started off the 2014 season with the pole position in the tough class, posting a 44.511-second lap time. In the first heat race, Preston led the opening few laps before settling in with a third place finish.  Following a sixth place result in the second heat race, Preston was set to improve his position in the main event on Saturday afternoon. Things got a little chaotic when the green flag dropped to start the S1-S2 combined main, and unfortunately for Preston, he was involved in contact at the start and fell down the order. Just like Milne in S1, the Aluminos pilot would not be deterred and he spent the entire race improving his position. When the checkers flew, Preston rebounded nicely to a ninth place result, and the confidence that he can run at the front.  Preston will most definitely be a factor in the S2 class championship this year.

The biggest class of the weekend was the S4 Masters Stock Moto category, as Team Aluminos supported four drivers. The elder statesmen of the Aluminos tent showed very well in Buttonwillow as Fernando Diaz, Phil Dunford and Jonathon Allen brought home a trio of top-10 finishes for the team. Diaz led the way for the team in qualifying as he cracked the top-five in his return to action. Dunford, also making his return after a year away, was two positions back in seventh, while Allen slotted his Aluminos kart ninth on the grid. New team driver PP Mastro was unable to record a lap in qualifying due to a technical issue. Mastro put the Aluminos chassis on display in heat one, coming from last in the 21-kart field up to 10th in just 10 laps. Diaz improved his position to fourth, while Dunford and Allen placed eighth and 12th, respectively. Diaz gained another spot in heat, setting up for an inside row two grid position for the main event. Mastro gained another two positions to start eighth, continuing his recovery. 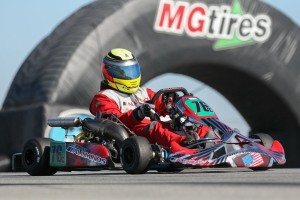 Fernando Diaz made his return to the seat a successful one, driving to a podium finish in S4 Master (Photo: dromophotos.com)

Diaz held the third position through the opening laps of the S4 feature race, running as high as second, and he eventually completed the 20-lap event in the third position to record his first podium of 2014. Dunford was able to shake the rust off and improve his pace in the main event, moving up to the sixth position for a solid end to the day. Allen was right on his bumper, putting three Aluminos drivers inside the top-seven. Mastro could have been a fourth, but a mechanical issue after the opening lap put him on the sidelines. It was a great opening to the year for Aluminos in the S4 category, and more podiums are certainly on the horizon for the team.

Jason Pettit contested the S5 Junior Stock Moto class at Buttonwillow with support from Aluminos, and the young shifter pilot recorded a sixth place finish in the season opener. Starting in qualifying, Pettit showed speed aboard his Aluminos chassis, posting a fast lap only two tenths off the pole position. After a pair of sixth place finishes in the heat races, Pettit held the position through the main event, gaining significant knowledge and experience racing with the top drivers in the region.

Patrick Kelly completed the Aluminos roster for the California PKC opener, racing in the TaG Senior division. Starting the main event back in the 20th position, Kelly drove a great race to climb up to ninth before contact by another driver dropped him down the order and later out of the race. 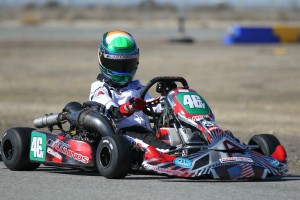 Aluminos is set for a return to the California ProKart Challenge next month, when the series travels to the Willow Springs facility in Rosamond on February 28-March 1. The season will heat up when Aluminos is on-site for the opening round of the Red Line Oil Karting Championship in Northern California on March 29-30 at the Simraceway Performance Karting Center in Sonoma.

Started as a manufacturing and distribution company specializing in kart racing specific products, the Danville, CA based operation created its racing team toward the end of the 2007 season. Led by Rob Soares, Aluminos has put together the essential pieces to help groom drivers of any age to reach their personal goals. Driver coaches Tom Dyer and Fritz Leesmann – both successful karters – teamed with their in-house Stock Moto program led by engine guru George Tavares, the Aluminos Trackside Support and Arrive & Drive program is above any other outfit in the country. The team also produces its own chassis line, the Aluminos.  Find out more at www.aluminos.com and the new www.shopaluminos.com for new and used products on-sale from the respected operation.