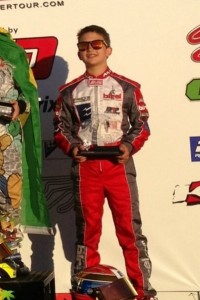 The month of February may be the shortest of the year, but for young karter Nicholas Brueckner, it will be spent mostly at the race track. The Texan is currently readying himself for three straight weekends of competition aboard his MRP Motorsport/Birel America Rotax powered kart, traveling over 3,000 air miles as he continues his rookie Junior season. The first two events of the month will take place in back-to-back weekends at the Florida Winter Tour, as both races are held at the Ocala Gran Prix facility, which is located about an hour north of Orlando. The third leg of the trip takes Nicholas back to Arizona, where he will visit the Phoenix Kart Racing Association facility in Glendale for the second stop on the Rotax Challenge of the Americas.

“The Ocala circuit is a rather quick track to get around, at only 6/10 of a mile, but it lacks the technical corners that most drivers are looking for,” stated Brueckner, as he prepares for his trip to Florida. “One of the best corners there is the ‘tree corner’, because as the conditions change throughout the day, you have to adjust your racing line. The best place to pass, however, is in the first hairpin corner, as you want to pull away in the second hairpin directly after. We will be focused on getting a great kart set-up right away, and outlasting the competition to bring home some wins.”

The first of the three-straight events is the second round of the Florida Winter Tour ‘Formula Kart’ series, where Nicholas is set to compete in the TaG Junior category. At the opening rounds in Homestead, he qualified fifth at Saturday before a wreck on the first lap of heat one put him back to 24th on the grid for heat two. It was a remarkable drive for the young rookie, advancing all the way to the lead during the 12-lap race. That performance would lead to his first top-five main event finish of the year, when he placed fifth. The following day was a fight to stay inside the top-10 after qualifying fifth. He would eventually place 10th in the main event, classifying him seventh in the championship chase with a great opportunity to move into the top-five with a solid performance this weekend in Ocala.  This was an incredible start to Brueckner’s Junior program, and sets a baseline for what is possible in 2014.

The opening Rotax Max weekend was held in Homestead just a week later, and it was a battle throughout the entire three days. Nicholas is running both the Mini Max and Junior Max categories in Florida, leveraging his age and eligibility to get maximum track time.  The Junior Max program on the FWT is extremely competitive and is a challenge for rookies.  On Saturday, Brueckner got shuffled back to the tail of the field in the main event, but he fought his way back up to 21st, showing great perseverance. Sunday’s outing was an improvement, with Nicholas working his way up to as high as 10th, before contact dropped him down the order again, eventually crossing the line in 22nd.  Brueckner never lost his determination to move forward, and this will serve him well as the season progresses.

In the Mini Max category, Brueckner is the defending FWT champion and he turned in a performance worthy of that title. Nicholas was forced to put in an outstanding drive from 28th to eighth in the Saturday main event after being pulled off for losing the nose cone in the Prefinal. Brueckner returned to the podium with a strong third place finish in Sunday’s action to sit fifth overall in the standings heading to Ocala. No matter the class, Brueckner is showing the speed to compete at all levels.

This pace was evident once again during his Rotax Challenge of the Americas Junior Max debut in Arizona. The first two rounds of the west coast series were held at the Musselman Honda Circuit in Tucson. Nicholas battled within the top-10 throughout the weekend, only to have racing incidents take him out of contention both days. In Saturday’s round one action, Brueckner was making his way up the order with a chance at the top-five until two competitors spun directly in front of him, and with nowhere to go, he was collected in the accident. While he was unable to continue due to the resultant damage, his potential and speed were there and they were improving. Round #2 was another day-long battle, as Nicholas fought for positions just inside the top -15 after qualifying 10th.  During the main event, another driver was a little overzealous in attempting to overtake him for position when contact was made. Nicholas was able to continue, but lost a number of spots, gaining a few back in the closing laps to finish 18th.

“The mission is to stand on the podium for the remainder of the season,” stated Brueckner, regarding his goals for the second and third stops of the Challenge. “We are out of the point standings at the Challenge with two bad results, so now it’s all about improving my racecraft and learning more about the Birel Junior kart.”

Be sure to follow Nick’s progression throughout the three weekends live on the Internet. Tune into the FWT Live broadcast of both weekends competing at the Florida Winter Tour and bookmark eKartingNews.com/live for audio coverage of the Challenge of the Americas event.

Racing out of Hockley, Texas, Nicholas Brueckner is a name you will be hearing more throughout the karting ranks in the coming years. At 12 years of age, Nick has spent less than four years in the sport, and has racked up impressive results and experience. From winning the Micro Max class at the 2012 U.S Rotax Grand Nationals and Mini Max championship in the 2013 Florida Winter Tour, to racking up wins at home in the SKUSA Texas ProKart Challenge, Brueckner is climbing the ladder quickly. Nick’s talents are far from being limited to just behind the wheel, however, as he is excelling academically, earning straight-As along with showing great leadership and people skills. Supporting Nick in his racing endeavors is the MRP Motorsport/Birel America team, Jose Castro/CMW Engines, Oakley Sunglasses and Savage Design.