Large Fields Flock to First Round of California ProKart Challenge 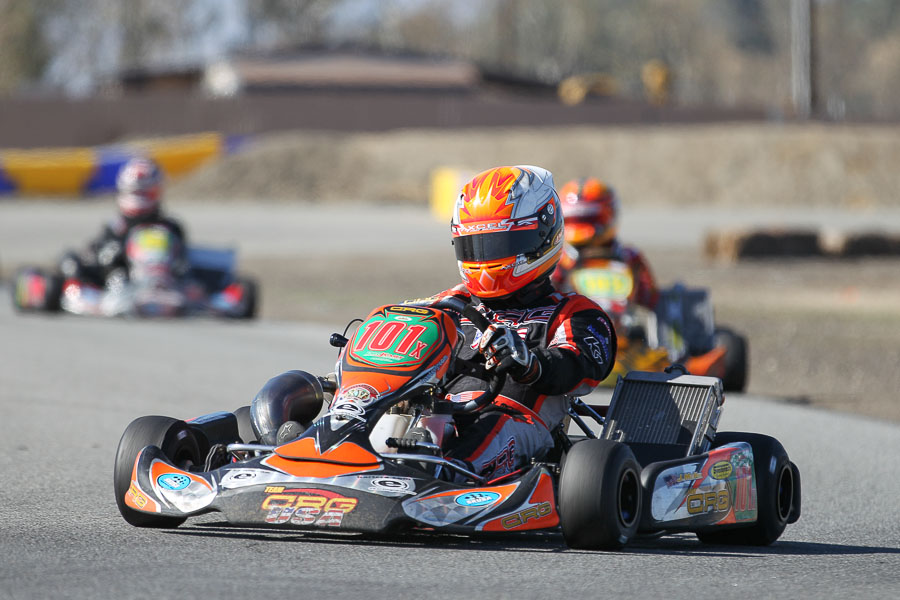 Momentum continues for the Superkarts! USA organization, thanks to the growth of the Pro Tour and the strong foundation of the regional programs. The California ProKart Challenge began the 10th season of its six-round championship series at the Buttonwillow Raceway Park on February 1 under beautiful skies and crisp air in the Bakersfield area. At 150 entries spread out over 10 categories, the action was fast and furious around the 7/10-mile course – with half the race winners earning their first ever victory. Familiar faces reached the top of the podium in the Pro categories, with Jimmy McNeil and Mason Marotta claiming the top spots, while veterans Darren Elliott and Billy Cleavelin returned stronger than ever. Even young guns Christian Brooks and Jarred Campbell were shining bright on the opening weekend.

“This was one of the best starts to the year we’ve ever had,” commented Superkarts! USA President Tom Kutscher. “When we first started the ProKart Challenge, it was always about getting people together to have a good time, and for a place to have the shops bring their customers. This weekend had a great vibe, the weather was just right for racing, and the action on track gave me goose bumps more than once. I saw a lot of new faces excited to be at the race track, and that is what SKUSA and the ProKart Challenge programs are all about.” 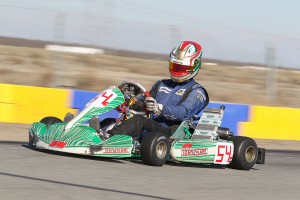 Mason Marotta set the tone for the season in TaG Senior (Photo: dromophotos.com)

The tone of the season was set from the start in the Vemme Kart/Extreme Karting S1 Pro Stock Moto division. Four different drivers led the way throughout the day, making it one of the most-diverse results in recent years. Colorado driver Cory Milne recorded his best qualifying result for the pole position, with the top-four separated by just two tenths. Milne could not get off the line as he hoped to begin heat one, allowing Texan Connor Wagner and defending champion Billy Musgrave through, as they ran 1-2. Musgrave grabbed the holeshot to lead all 10 laps of heat two over Wagner, as Jimmy McNeil inched his way forward into third, setting up for a three-driver fight in the feature. Musgrave held the lead through the opening lap, with McNeil in the second spot. By lap five, the 2012 champion took over the lead. From there, McNeil stretched out to a two-second advantage to earn the first victory of 2014. Musgrave drove to second, with Wagner completing the podium in his first S1 event. Milne ran to fourth with Cody Hodgson returning to place fifth.

Nearly 30 drivers filled out the field in the Mike Manning Karting TaG Senior category, including a number of Senior rookies in addition to the return of karting veteran and former IndyCar winner Richie Hearn. The day, however, was led by Mason Marotta, who claimed the top step of the podium. Qualifying was led by rookies – Brenden Baker and Jake Preston – separated by just 43 thousandths, with Marotta in the third position. Marotta would lead nine of the ten laps in the opening heat race for the win, before fighting with 2013 series champion Jake Craig in the second heat. The main event was all Marotta, leading the full 20 laps for the victory, with Craig and Austin Elliott keeping it close to round out the podium. Veteran Matt Johnson drove to fourth with Nathan Seegrist capping off the top-five. 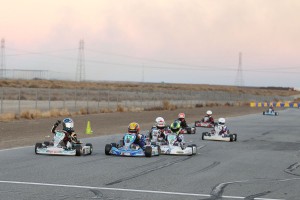 A record 26 TaG Cadet drivers opened up the 2014 season in the Pure Karting-sponsored class. It appeared to be a three-driver fight until an exciting feature race saw Trey Brown emerge as the victor. Oliver Calvo posted the fast lap in qualifying, quicker than Brown by a tenth of a second. Calvo ended up in a dog fight in heat one with Myles Farhan, as the race went down to the wire – as Farhan claimed the win. In heat two, Farhan would get shuffled back leaving Calvo to run up front, this time challenged by Brown. Calvo edged out Brown by 84 thousandths at the line for the win and main event pole position.

Brown and Calvo would be shuffled back during the opening lap of the 15-lap feature, leaving Farhan to take over the lead. He relinquished the position to Jagger Jones on lap three. Jones led the field, while both Brown and Calvo advanced their way up the order. By lap 12, they were in the top-four, working past Dante Yu for position and setting their sights on Jones. The following lap both Brown and Calvo moved past Jones for position. Coming to the checkered, Brown beat Calvo to the line by 43 thousandths for the victory. Jones completed the podium, with Farhan and Tomas Mejia completing the top-five. The top seven drivers – including Yu and Joseph Daniele – finished within one second, setting up for an exciting 2014 TaG Cadet season. Mixed within the class on track was a newly identified TaG Cadet Rookie category, with eight new drivers included. Jullian Busick was the victor, with Stephen Brucker and Luca Roma completing the podium. 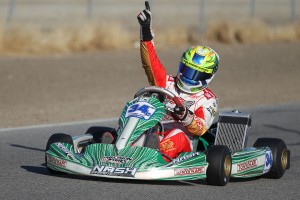 The California ProKart Challenge is no stranger to drivers performing strong in multiple classes, including the Junior ranks. Carter Williams – the Streets of Lancaster Grand Prix Scholarship driver in 2014 – was a regular fixture at the front in S5 Junior Stock Moto and TaG Junior last season. His graduation to the Senior level has left a void, perhaps now filled by Christian Brooks. Christian’s path to the top of both podiums this weekend was not an easy one. A total of nine drivers filled out the Sunshine Daydream Creations S5 Junior Stock Moto roster, led by Roy Fulmer IV in qualifying. Brooks – making his first S5 start – was second place by just under a tenth of a second. Fulmer drove to a comfortable win in each heat race, with Brooks holding onto second. Both Fulmer and Brooks dropped behind Garrett Dixon at the start of the main event, with Brooks able to recover. He turned up the wick and drove up to take the top spot by lap seven, then pulling away to a near four-second victory. Dixon ended up second with Fulmer in the third position.

In the Buddy Rice Karting TaG Junior class, Phillippe Denes was the driver to beat early on. He locked up the pole position in qualifying en route to a wire-to-wire win in the first heat race, while Brooks came up from sixth to second. Justice Lepe and Royal McKee made it interesting in heat two, as they picked up the pace to move into the top two positions. On the flip side, Brooks struggled with a set-up issue, dropping back to 10th at the checkered flag. A great start in the main event put Brooks back into the top five and into the lead by lap four. The pressure stayed on Brooks with Denes, Lepe and Michael Avansino on his bumper. Avansino took over the lead on lap 12, showing the way until the final lap, when Brooks made a clean pass for the lead in turn one and drove away for the victory. Lepe would move up to second, with Denes completing the podium as Avansino dropped back to fifth, one spot behind McKee. 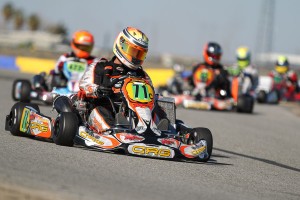 The opening event also marked the return of shifterkart icon Darren Elliott. The three-time SKUSA SuperNationals winner began his comeback to karting with a victory in his 2 Wild Karting S4 Master Stock Moto debut. Rob Logan was able to reject Elliott from an event sweep early, claiming the top position in qualifying by 77 thousandths over the veteran, with defending champion Willy Musgrave third. Elliott grabbed the holeshot and led all 10 laps in both heat races, but the main event was a different story. Musgrave was able to work past Elliott for the lead on the opening circuit of the 20-lap race. The reigning champ led for the first eight laps before Elliott returned to the top spot, and pulled away as they fought for second place behind him. Logan won the position and closed up to Elliott in the closing laps to finish second, with Fernando Diaz making his return to California PKC competition with a third place result. Musgrave ended up fourth with John Crow in fifth – until he was removed in tech for a missing timing plate, elevating Darrell Tunnell to fifth. Luke Bianco was able to outlast top qualifier Jeff Krogstad in the Mothers Polish S4 Magnum Stock Moto class, with Steve Wiener placing third in his class debut.

The win total for Billy Cleavelin over the last 12 months is now up to six, as he swept the Leading Edge Motorsports TaG Master division once again. Thus far, the only main event loss Cleavelin has had in the California PKC competition is from last year’s round five in Buttonwillow, when the course was run backwards. The 2013 class champion ran away with the pole position in qualifying and the first heat race, but Kevin Manning gave him a run in the second heat, leading a few laps before Cleavelin controlled the top spot to the checkered flag. Manning tested the waters again in the main event, but like his name-sake, he was unable to stay with the soaring seahawk that was Cleavelin.  At the line, it was Cleavelin by five seconds over Manning, with Pro Tour regular Chuck Gafrarar making the trek out from North Carolina to score a podium finish.  Michael Middleton finished fourth, with former Pro Tour champion Ethan Wilson fifth. 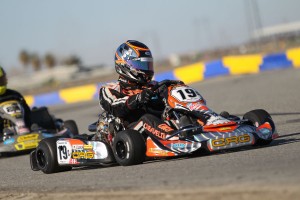 Top S2 Semi-Pro Stock Moto drivers from 2013 graduated to the S1 division, opening the door for some new names to reign over the category. This weekend was the debut of the newest S2 driver – Jarred Campbell – claiming his first victory in the Phil Giebler Racing-sponsored division. Will Preston kicked off his California PKC S2 debut in style as well, securing the pole position by a slim nine thousandths over S2 rookies Carter Williams and Campbell. The field was so close that the top-10 qualified within three tenths of each other. Preston led the opening laps of heat one, until Campbell took over on lap five and held on to the end, with Texan Luke Shanahan sliding past for second. Once at the point in the S2 class, Campbell began mixing it up with the S1 drivers on track and pulled out to a four-second gap in heat two over Shanahan. Campbell ran as high as second overall in the main event, going on to score the impressive S2 victory. Jake Craig made his S2 debut, climbing up to second and closing in on the leader at the very end. Kolton Griffin crossed the line third, but was penalized one position for jumping the start. That cost him the podium spot, handing it to Curtis Paul Jr., with Shanahan rounding out the top-five. The Nash Motorsportz S3 Novice Stock Moto class welcomed the largest turnout to date with nine drivers competing on the weekend. Travis Nicklas scored the victory, with newcomers Cris Araujo and top qualifier Steve Wetterau completing the podium. 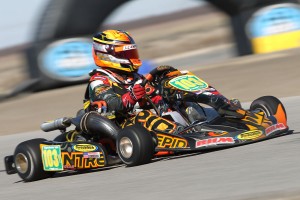 The day ended with the annual podium ceremonies and raffle drawing, where SKUSA’s Tom Kutscher gave away a number of prizes that included three FREE entries to the second round of the California ProKart Challenge, a free can of fuel, and three sets of MG Tires.