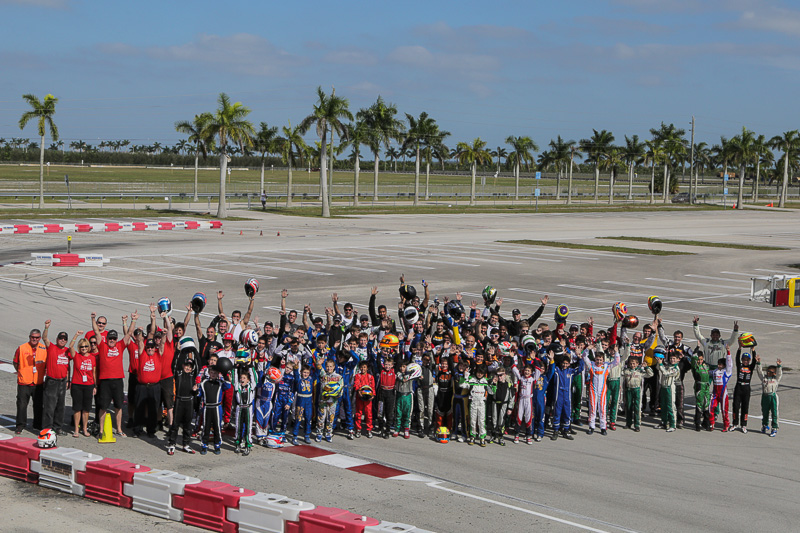 This weekend the competitors of Formula Kart Production’s Florida Winter Tour, presented by Ocala Gran Prix, take to the exemplary Ocala Grand Prix circuit for rounds 3 and 4 of the 2014 FWT Formula Kart Racing Championship. As the “middle” rounds of the six race season, the competitors in the Formula Kart Racing TaG, Shifter and Briggs classes will be going all out to achieve the highest rankings possible as they make their way to the series finale at Orlando in March.

NUMBERS ARE UP
Drivers and entries are up again for the FWT Formula Kart Racing program, with 144 drivers, representing more than 580 entries, taking part so far in the first two “FK” event weekends.

SHIFTERS
One of the big stories for the 2014 is the return in force of the shifter karts. At the opening rounds in Homestead the big boys of karting put on an awesome show with 24 drivers participating. And with more entries expected for Ocala, we could be seeing a revival of the mega shifter kart grids from the early days of the FWT.

BRIGGS
While the classes that were the genesis of the FWT are on the rise, the new kids on the block are also making noise as a class to watch for the future. With dedicated support from Briggs & Stratton and McLaughlin Motorsports the Briggs LO206 Senior class got off to a solid start in Homestead. With continued support for Ocala we are seeing the future of affordable karting being showcased at FWT. Last week it was announced that Briggs and Stratton will be providing a $150 entry incentive for every Senior entry in the Briggs LO206 class during the Ocala Gran Prix rounds.

“Bill has done a tremendous job with his series and we are excited, as are our racers, to be a part of it” stated David Klaus, Director of Briggs and Stratton Racing. “The LO206 is about the racer. Raising our entry incentive allows more LO206 racers to showcase at the FWT just what cost-effective, out of the box racing is all about!”

With the increases level of commitment from Briggs, and the addition of Briggs Junior and Briggs Masters classes to the FK schedule for the March rounds of the Tour in Orlando there’s never been a better time for those considering these affordable, spec categories to get involved.

TaG
Solid numbers exciting racing and good parity between the different engine makes are the hallmarks of the FWT Formula Kart Racing TaG program. The opening rounds proved once again why these classes continue to draw the biggest numbers in the “FK” weekends. Ocala’s tight course will offer some challenges for the drivers, tuners and scrutineering staff. But, this track has given us some epic TaG racing in the past, and we expect no less this weekend. 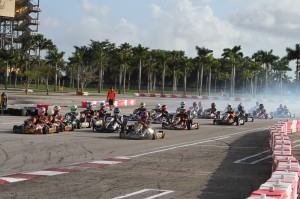 TOP TALENT
With the entry numbers we saw in Homestead, and with the pre-entries received so far for Ocala, the FWT Formula Kart Championship is experiencing its second straight year of double-digit-percentage growth in entries. And topping that off, there’s a lot of quality to go with the quantity. With competitors like Daniel Formal back to defend his TaG Senior crown and Dylan Tavella who ended 2013 as one of the hottest drivers on the planet, or any of the multitudes of international karting champions or professional auto racing drivers making the trek to Florida, there will be no shortage of top talent competing in Ocala.

AWARDS
With so much on the line, no one will be giving any quarters in the quest for the bounty in the awesome cache of prizes in store for the Formula Kart competitors. These awards include $23,000 in Skip Barber car racing support, $1,200 in cash for both the Briggs LO206 finals winners and the highest place finishers onboard a Victory Kart, and special awards for all pole qualifiers via the P1 Pole Position Awards provided by Koene USA. Also back for 2014 is the enormously popular award of a seat in the Granja 500 provided by MG Tires.

In addition to the aforementioned awards, both IAME and VORTEX continue to offer factory support for FWT competitors. In IAME’s case, competitors in both TaG Junior and Senior will be eligible for awards valued up to $10,000 when they use either the Parilla Leopard or X-30 engine. Likewise, VORTEX is providing support with affordable engine leases on the exciting RoK shifter package, and awarding the top finishing driver in Open Shifter using a RoK engine an entry and all consumables at the 2014 RoK Cup USA Finals.

MAN CUP / NATIONS CUP
The 2014 FWT Manufacturers Cup Championship got off to a solid start and, with four of the 12 rounds for 2014 in, Tony Kart and CRG have resumed their battle for overall chassis supremacy. Going into the Ocala rounds, Tony Kart maintains the lead but their Italian rivals are on their tail with others looking to make inroads on their lead. Birel currently has a slight advantage over the new AM Chassis for third.

In the Nations Cup, the defending champions The United States jumped out to a healthy lead over Canada and Venezuela after the Homestead rounds. All eyes will be watching the points to see if the “home team” can maintain their advantage or if the solid contenders will make a move at OGP. As in previous years, the battles for the Manufacturers and Nations Cups will be exciting to watch.

Founded in 1996, Camp Boggy Creek is a year-round medical camp for children with serious illnesses. Co-founded by racer/actor/philanthropist Paul Newman and General H. Norman Schwarzkopf, the camp offers week-long summer sessions and family retreat weekends at no charge to the children or families. Located in Eustis, Florida, the 232-acre nonprofit serves children ages 7–16 that have been diagnosed with chronic or life-threatening conditions. The camp is entirely funded by generous donations from individuals, corporations, foundations and healthcare partners. Learn more by visiting www.campboggycreek.org.

On February 7th at the FWT Formula Kart Racing event in Ocala, Sarah Gurtis from Camp Boggy Creek will attend to learn what makes FWT “Serious Fun!”, and to help those in attendance understand how they can help support the efforts at Camp Boggy Creek. If you see Sarah at the track let her know you appreciate her being part of “Serious Fun!” for FWT, and the kids. Please join Formula Kart Productions in supporting Camp Boggy Creek, or any “Serious Fun Camp” around the world. You donation of time and/or money will make the difference for a seriously ill child and their family.

SERIOUS COVERAGE
FWT Live!, Formula Kart Production’s ground breaking live streaming broadcast coverage, continues in 2014 and will provide viewers with streaming video and live timing and audience interactivity. If you’ve never seen an FWT Live! broadcast, be sure to log on to http://floridawintertour.com/fwtlive/2014/ beginning Saturday February 8th to witness the action from the Ocala Gran Prix facility. To interact with the FWT Live! crew or to send shout outs to your favorite drivers, send emails to the announcers at live@floridawintertour.com.  To stay connected throughout the 2014 FWT Formula Kart Racing season, be sure to “like” our Facebook page at www.facebook.com/FloridaWinterTour.