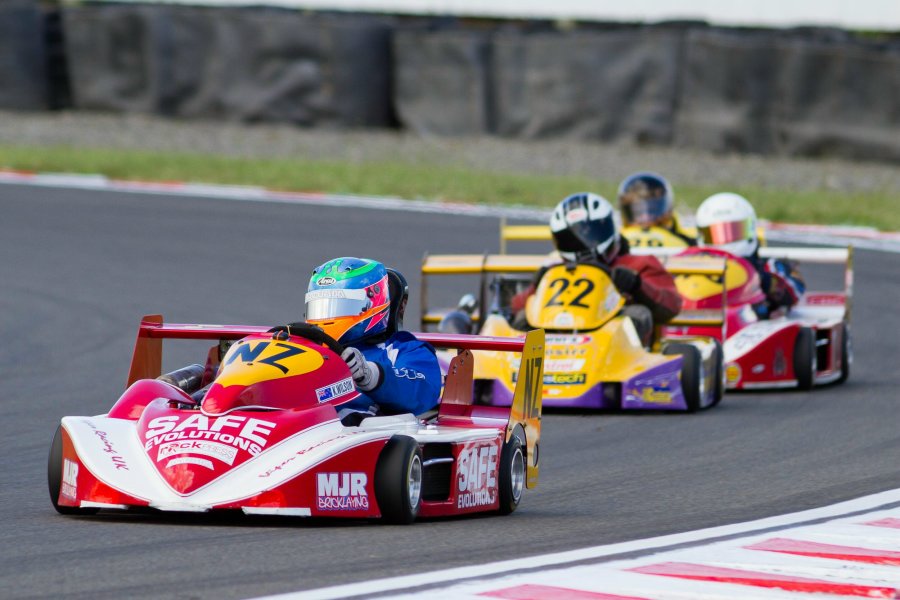 On paper it was the perfect result – pole position in qualifying, four fastest race laps on the way to four heat race wins plus a runaway victory in the stand-alone Grand Prix race – but Wellington’s Karl Wilson says winning his fourth straight New Zealand SuperKart Championship title on Saturday was no cakewalk

“It was definitely harder this year than the last couple,” he said of his victory at KartSport New Zealand’s annual SuperKart title and Grand Prix meeting at Feilding’s Manfeild motor racing circuit. “The competition was a lot closer.”

Wilson was one of four title winners at the meeting, claiming the International class from Wellington’s Tony Gestro, Auckland’s Andrew Hall and former National class title-holder Robin Wooldridge from Whangarei. He also again took home the coveted Pommie Trophy for the driver with the best finishing record across the heats and Int/Nat GP. 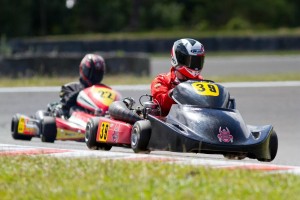 Chris Simmons (#39) was the other Wellington driver to win a title at the meeting, top-scoring in National from defending champ Steve Wilton (Photo: Fast Company/Jordan Moss)

In the other classes, Chris Simmonds won the National class title from defending champion (and fellow Wellingtonian) Steve Wilton, teenager Josh Drysdale from Palmerston North won the Rotax Light title from Ben Thom and the Rotax GP race from Clayton Merz, while Daniel Sayles from Auckland came out on top in Rotax Max Heavy from Karl Cameron and David Odering.

This year’s SuperKart title meeting attracted the biggest International class entry in recent years with Wilson setting the pace in qualifying but Aucklander Ryan Urban and Paul Dunlop from Clydevale (near Balclutcha) not far behind and only two-and-a-half seconds separating the top seven.

That said, Dunlop managed to come back strongly in the stand-alone combined International/National class Grand Prix, finishing second to Wilson, explaining that his problems in the heats were all a result of a chain adjuster.

“It broke in the second heat and we fixed it but still had problems with the chain in the third. I’m very happy with our new engine though so we’ll be back next year for sure.”

In Rotax Max Heavy, however, eventual winner Daniel Sayles from Auckland won only one of the heat races, and claimed the 2014 title by just one point from Karl Cameron with David Odering and quickest qualfier Brad Alexander just another point back and Alexander the first Heavy class competitor home in the combined Light/Heavy Grand Prix in fourth place. 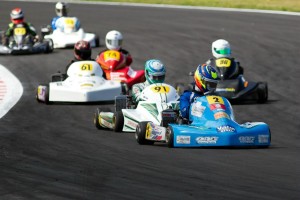