Victory for Versteeg at Rotax Challenge of the Americas Opener 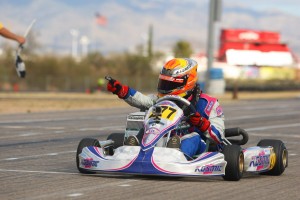 Entering his third year in the Junior ranks of karting, Utah driver Austin Versteeg is primed to be among the top pilots in North America for 2014. This statement was backed up big-time by his recent performance at the Rotax Challenge of the Americas opener in Tucson, Arizona over the January 24-26 weekend. Racing at the ultra-fast Musselman Honda Circuit, the Rolison Performance Group driver scored his first Junior Max victory in the series, following numerous podium visits over the past two seasons. The win, coupled with a fourth place finish in round two, put Versteeg in the championship chase as he exited the weekend, just a point behind the leader.  With a ticket to the Rotax Grand Finals and a invitation to Team USA going to the title winner, Versteeg is positioned well and is running at the top of this game.

From the moment Versteeg’s Kosmic hit the track for Friday practice, it was among the quickest karts in the Junior Max category. The speed carried over into the opening round of competition on Saturday. Versteeg recorded the second quickest lap of the qualifying session, missing out on the pole position by a mere four hundredths of a second. Experience would be the key to a win in the Prefinal as Versteeg raced the polesitter for the entire 14-lap race. A move in the final few corners secured the top spot for Austin, earning the pole position for the main event. The resultant spot at the head of inside line benefitted Versteeg at the start of the 25-lap feature, as he escaped the clutches of the field and got out to an early one-second advantage. From there, he posted consistent lap times to remain well out front to earn his first ever Rotax Challenge of the Americas Junior Max victory. Following the win, Versteeg dedicated the winning trophy in the memory of Randy Cook, a member of the CRG-USA operation and the karting community who lost his life on New Year’s Day.

“It was a great feeling to score my first Challenge victory as a Junior driver and I couldn’t have asked for more from my RPG team and mechanic Brian Fletcher that day,” stated Versteeg after returning home to Utah. “I spent a lot of time with Randy and the Cook family in Grand Junction when I was driving a CRG, and I wanted the Cook family to know that he was not forgotten in my thoughts. Randy will always be in my thoughts and prayers.”

Sunday was set up to be another strong day for Versteeg, building off the victory on the previous day. Qualifying went nearly as it did the previous day, coming up just short of the pole position, but still classified third in the order. Versteeg jumped into the second spot on the opening circuit of the Prefinal, but stumbled on the exit of a corner, which allowed the leader to pull away to a one-second gap. With a solid draft behind him, Austin ran down the leader and began fighting for the point. Taking over the lead on lap three, he held onto the top spot for the remainder of the 14-lap event for the win and the pole position for the main event.

The feature race was an all-out dogfight for the entire 25 laps, with Versteeg coming out just short of the podium. After shuffling around in the early laps, Austin established himself as the leader and would pace a four-driver breakaway. The order then went unchanged until there were just five laps remaining, when a fight for second began. Versteeg was able to distance himself from the gap by a couple kart lengths, but that distance would shrink, and the final fight ensued. Versteeg was shuffled back to second and while attempting to take back the lead, contact was made and Austin was sent unceremoniously off the course. This dropped him to fourth and too far back to challenge for the podium over the remainder of the final lap.  Nonetheless, the top-five finish provided another a solid points day toward the goal of the season championship and the 2014 Rotax Grand Finals ticket.

“I made a pass for the lead and the driver behind me drove me off the track. Typically, at this level, drivers don’t need to resort to those types of moves to try to win,” added Versteeg. “I feel bad for my teammate Kyle Wick as well, because he made a clean pass for the win and then had it taken away from him with a penalty for very light contact. I guess that’s racing. We will just push forward, as we have the championship to focus on at the remaining two events.”

The Challenge of the Americas opening weekend followed what was a podium finish for Versteeg at the opening rounds of the Florida Winter Tour earlier in the month. The first weekend was held at the Homestead Karting facility in Miami, but it started off poorly and ended strong. Versteeg qualified in the top-10 for round one action, but contact in both the Prefinal and Final dropped him in the order, eventually placing 23rd. Sunday faired much better, as Austin set the fifth quickest time in qualifying and held the spot through the Prefinal. He would lock up the third position early in the feature race, and held it to the checkered flag for his first podium finish in the series.

Versteeg currently sits ninth in the Florida Winter Tour standings, and second in the Rotax Challenge of the Americas championship chase heading into the month of February. Austin will start the month at the Ocala Gran Prix on February 14-16 for the next round of the FWT, followed by the second stop of the Challenge at the PKRA facility in Glendale, Arizona on February 21-23. Visit www.austinversteeg.com for more information and to follow his path during the rest of the year.