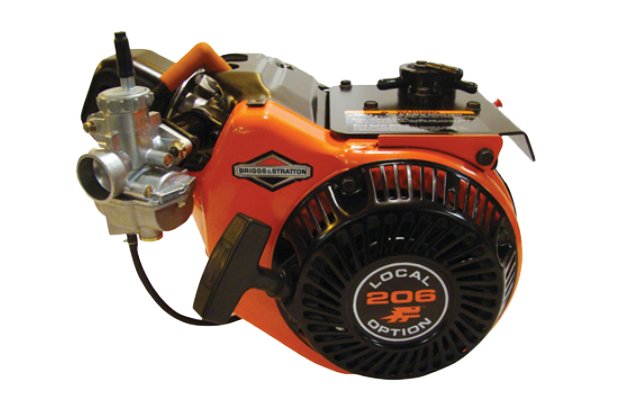 A trending engine package that is sweeping the country right now is the Briggs & Stratton Local Option 206. Made in America, the four-stroke powerplant has positioned itself as an ideal entry-level program, and also as a great avenue to bring former racers and older chassis back to the racetrack. In just a few years, the LO206 engine has become a national-recognized engine in Canada, and is now reaching the four corners of the United States at the local, regional, and national level.  EKN is excited to be working very closely with Briggs & Stratton to promote the LO206 program as part of a joint ‘Operation Grassroots’, which has the sole goal of rebuilding the club level of karting, which is the all-important foundation.

David Klaus, Director at Briggs & Stratton Racing, has been working day after day to spread the word in regards to what the 206 offers to the racing community, especially karting. They are happy to release the rule set for the 2014 season – which is identical to the previous year.

“This year’s 206 rule set was a difficult one as we had to change the year on the cover page from 2013 to 2014. That falls in line with our goal of this program, that cost-effective racing is about long-term stability.  The 206 is for the racers, built by racers, and backed by a common sense approach to rules and backed by a company in the full-time business of racing.  The ‘part of the month club’, the rule changes driven by self-interest instead of our racers’ best interest, will NEVER be a part of our factory rule set.  That doesn’t make for better racing, it takes away from it.  If you get beat, it should be because you missed the setup or blew a corner, not because you have the latest widget or were out-spent.  In 206 racing, the finish is up to you. ”

2014 is primed for a year of expansion in the LO206 market. The addition of the Florida Winter Tour has been exciting for promotion, and numerous programs at all four corners of the country have started up in recent months, with a number of clubs and series adding the LO206 classes to their 2014 class roster. The continued growth is a good sign of what Briggs & Stratton is offering to the karting market.

“The 2014 race season is looking to be a great one,” Klaus continued. “We have a large contingency of tracks bringing the program on-board and much of that ‘push’ is coming from the racer, and with that, grassroots series are taking note.  The WKA Gold Cup, IKF Grand Nationals, Route 66 Series, and the Florida Winter Tour as you mentioned, the new Mid-America Sprint Series and more are including the program for the first time. Look, the economy isn’t great.  Packages that were promised to be cost effective aren’t because they can’t be controlled.  The result is a laundry list of the rule changes, some out of necessity and others to feed the ‘part of the month club’, and racers are frustrated. Other karting engine platforms simply cost too much upfront and/or have maintenance schedules and costs that are pushing a point of being unsustainable in our sport.” 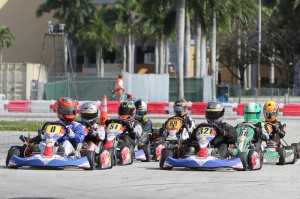 The Florida Winter Tour added the LO206 engine to their program in 2014 (Photo: Studio52.us)

At many of the events over the past few years, racers have been able to take the engine directly out of the box, bolt on the necessary accessories, put it on a kart, and go racing. EKN’s David Cole and Rob Howden has done this already at the ASN Canadian Karting Championships and the Rock Island Grand Prix. That’s the goal and direction of the LO206 project.

“The 206 racing engine is an engine for the racer, built by racers to a straight forward FACTORY set of rules.  When you break it down, it hits the ‘reset’ button by simplifying racing.  It’s exactly what the sport needs to reach current racers AND a whole new audience that karting has never had before.  Gone is the need to research the latest and greatest part or the need to be an expert mechanic.  In place of that is opening a box and over four years of proven championships, and thousands of club and national races that put the finish back on you. While it might be odd to hear from an engine manufacturer that our goal is to build this product to such a high standard that we take the engine right out of the equation, but that is what the 206 is all about.”

“When you take away the rules that allow for the exotic spark plugs and air filters, the very things that add cost and variances to the playing field, you end up with some of the best racing on the planet.  The 206 engine delivers that, right down to giving every competitor the same rpm range to do battle in.  It’s refreshing when I can tell a racer who used to changing their valve springs out every weekend that they can at the end of the year if they are bored…or run them again next year.  With the rev limiter, the advantages of spring pressure are gone.”

One of the key aspects is keeping the rule set uniform throughout the market, something that is unfamiliar grounds for United States karting, and what racers have been begging for a number of years. With the LO206 engine, there are no special rules at one track, and then other rules to compete at another. Racers want a standard set of specs with their engines so they can pick up and race where they want, without having to worry about any special or unique rules. 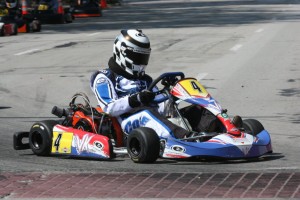 “We had hiccups when the rule set was first released.  The same general sanctioning body approach crept into their initial interpretations.  An interesting thing happened though, and it’s a testament to our racers, they simply said enough is enough.  Who better to write a set of rules for the engine than the manufacturer that builds EVERY engine?  What a novel idea to understand and recognize that it is in our best interest, the industry’s best interest, to have a set of rules focused on maintaining a level playing field AND cost.  It makes no sense to allow a $40 spark plug when a $3 spark plug does the same job and provides zero performance variation.  It’s a common sense approach and thankfully the organization rules have come back inline. That is an important step if we are going to work together for the betterment of the sport.  IKF has actually gone a step further which I think it’s important to mention, in that they have locked ALL of our rules down for the next five years.  That stability is a critical step in rebuilding karting today and growing it tomorrow.”

eKartingNews.com has committed to the growth and development of the Local Option 206 program, and will continue with their Operation Grassroots program. Every few weeks, a new article surrounding the LO206 community will be published. It will highlight a number of components that will help continue the growth of the LO206 program, including driver interviews, club and series profiles, in-depth articles surrounding the engine itself, along with the company – Briggs & Stratton.

To view more information on the Briggs & Stratton 206, please visit www.BriggsRacing.com and see what all the fun is about on their Facebook Page.