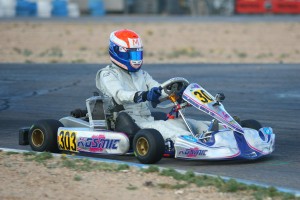 Luke Selliken drove to a top-five finish during his Senior debut weekend at the 2014 Rotax Challenge of the Americas opener (Photo: SeanBuur.com)

The 2014 season is primed to be a year of firsts for rising karting star Luke Selliken. After established himself as one of the top drivers in the Junior ranks over the past two years, the Rolison Performance Group pilot has graduated to the Senior level of the sport, taking on the very best that North America has to offer at the recent Rotax Challenge of the Americas. The opening rounds were held this past weekend at the Musselman Honda Circuit in Tucson, Arizona and these were the first laps that Selliken turned behind the wheel of a Senior Max entry, and he improved with every session on the course. After a rough start on Saturday, Selliken stepped up on the second day of competition to record an impressive top-five finish, making a statement in the process.

A majority of the first laps of the weekend were spent adjusting to the quicker speed, a heavier kart and softer tires than what Luke had competed with over the last two years. His speed was showed well during practice, but the first qualifying session ended with him classified in the 15th position.  The Senior Max class is incredibly competitive, and being just a tick off means being outside the top-10.  Luke stayed within a few positions of his starting spot in the Prefinal, moving up a couple places and then dropping back, but maintained the 15th position when the checkered flag had waved. Things went a little better in the main event, as Luke worked his way forward during the long 25-lap race. Breaking into the top-10, Selliken was assured a great finish until on the final lap when another driver pushed him off-course during an over-zealous move. That would drop the RPG driver down to the 21st position at the checker.

“We worked on the motor a lot and made some changes to the chassis set up as well,” stated Selliken following his opening weekend in Senior Max.  “A fuel pump issue hampered our speed early, and once we solved that, we were much quicker. I was disappointed with Saturday after having so much speed the day before, and I’m not really sure what was the issue. That’s part of racing and we regrouped to move on to Sunday hoping for better results.”

Sunday began in a very similar fashion to that of the previous day, with Selliken slotting into the 12th position after the timed qualifying session. Luke began to work his way up the order in the 14-lap Prefinal, but contact dropped him back down the order, where he eventually finished 14th. The start to the 25-lap feature nearly cost him the race, as a number of drivers wrecked directly in front of him. Thankfully, Selliken used his quick reaction ability to escape and continue on in the eighth position. From there, he and teammate Blaine Rocha worked together to climb up the order, posting some of the quickest laps of the race. They would close up on the tail end of the top-five, and Selliken then worked past 2012 series champion Phil DeLaO to secure the fourth spot. Luke held the position to the checkered flag, placing one spot behind defending series champion and teammate Phillip Arscott.  It was a huge result and a breakthrough for the rookie Senior.

“The team worked hard on Sunday and the results showed,” continued Selliken. “We nearly pulled off the fast lap of the race, and I was able to work my way up the order and into the top-five. I’m upset that we missed out on the podium, but the final results were a good way to end the weekend.”

Up next for Luke will be the second stop of the Rotax Challenge of the Americas program – held at the Phoenix Kart Racing Association facility in Glendale, Arizona on February 21-23.  The PKRA is the site of Selliken’s first major victories back in 2012, when he swept both Junior Max main events at the Challenge of the Americas event.  Luke would like to thank Rolison Performance Group, M Realty, and Guild Mortgage for their support toward the 2014 season. Be sure to visit SellikenRacing.com for more about Luke and follow his updates on Facebook.

About Luke Selliken:
The road to the top level of the sport has been a successful on-going journey for Luke Selliken. Luke’s introduction to the sport began at the indoor karting level, and has expanded into competitive national-level karting. Making the quick jump from the local and regional programs to the national stage, Luke excelled in 2012, earning vice-champion in the Rotax Challenge of the Americas program, carrying that momentum onto the Superkarts! USA Pro Tour TaG Junior championship. Luke was among the top Junior drivers in the country in 2013, earning another championship runner-up result in the Challenge of the Americas, and then went on to win five of six feature races at the Can-Am Karting Challenge to earn his first ticket to the Rotax Grand Finals. The 2014 season will be about learning and growth for Luke, as he makes the jump to the Senior categories.