Mazzaferro Fast Out of the Box in 2014 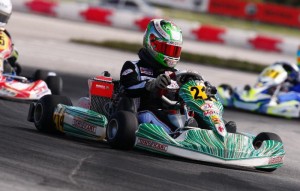 Gianfranco Mazzaferro, a member of the Ferrolati Corse Karting Team and the 2013 Canadian National Junior Rotax Max Champion, started off his sophomore season of junior level competition at the internationally renowned Florida Winter Tour. Ranked as one of the top karting series in the world, GF used the Formula Kart weekend as a warm up for the Rotax Max weekend. Along with a new season comes a new support program as William Allen joins the Ferrolati Corse Karting team as driver coach for Gianfranco.

The Formula Kart weekend runs the Junior category following the TaG rules, opening up the field to both IAME and Rotax engines. GF would run the Rotax package in order to gain valuable data for the following weekend. On Saturday GF took 12th in qualifying as he shook off the early season rust. Heat one saw contact early, pushing GF back to 20th, while he improved to 12th in Heat Two. The final was a strong run with GF taking 12th at the line and making some solid progress on the field. Sunday was another crisp day in South Florida and a better start as GF took ninth in qualifying followed by eighth in heat one and a difficult 16th in heat two. The final was as another good run with GF crossing in 17th among the 28-kart field.

“We knew it would be tough running Rotax on the Formula Kart weekend,” comments Mazzaferro. “But getting time on the track and collecting some data was our goal. We were one of the quickest Rotax powered karts so overall I was happy. It was nice to work with Will and begin to understand how we communicate.”

With the challenges of the Formula Kart weekend behind, GF headed into the Rotax weekend with confidence and a strong starting set-up. And he didn’t disappoint. On Friday qualifying for the double-header weekend, GF took third in session one for Sunday racing and then grabbed pole position for Saturday action with the fastest lap in the afternoon timed session.

On Saturday, GF would convert that inside front row start to a win in the prefinal. Again from the ultimate starting spot, GF held point and lead the final the checkerd flag to sweep the Saturday races. As the man to beat, Sunday was tough with GF starting inside row two and getting taken out of the race on the opening lap and scoring a DNF. Starting from last in the final GF moved forward quickly gaining spots early until a mechanical ended his day on lap nine. The strong start has GF sitting fourth in the overall championship point’s standings.

“Saturday was amazing,” beamed GF. “All the hard work and frustration from the previous weekend paid off and we were fast. It was great to be able to sweep the day. I think on Sunday I had a bit of a target on my back. Not the day we wanted, but overall a great weekend. I really enjoyed working with Will and I think this year is going to be really good.”

Up next for GF and the Ferrolati Corse Karting Team will be the second round of the FWT Formula Kart weekend taking place at Ocala Gran Prix on February 7 to 9 followed by the Rotax Max weekend on February 14 to 16.