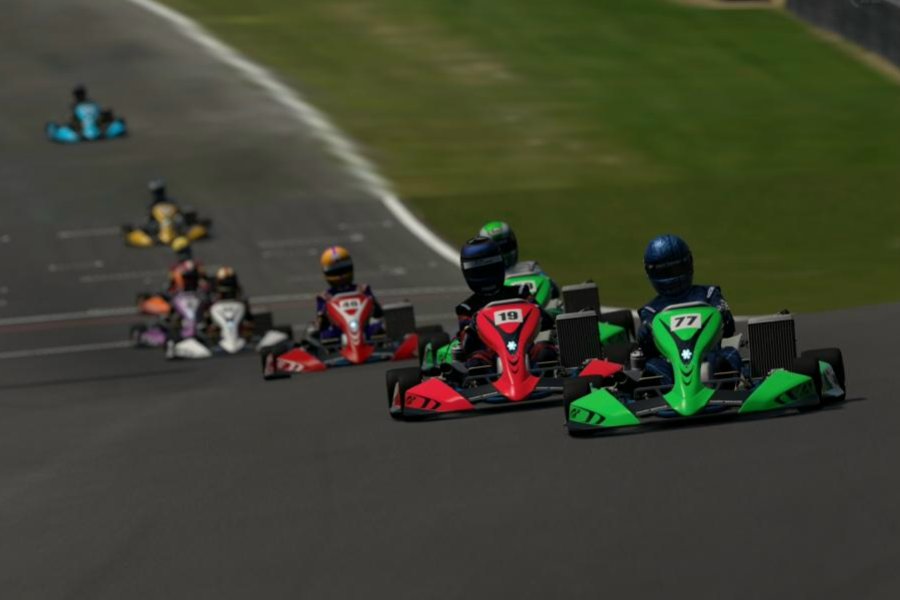 As a 20-year-old guy who loves video games, I jumped at the chance to be the member of the EKN crew who would review Gran Turismo 6. Thanks to school, travel and work commitments, I don’t get as much time to play video games as I’d like to, but thanks to a break in school for the holidays, I was able to sit down back at home and dive into GT6. The latest edition of Gran Turismo offers the best version of video game kart racing that I’ve come across.

Gran Turismo creator Kazunori Yamauchi’s first game after joining Sony and Polyphony Digital in the early ninety’s was a karting game called “Motor Toon” – which he said was inspired by Mario Kart. Over the years as Yamauchi climbed the ladder at Sony and began releasing the world famous GT series. He always kept karting on his mind, and introduced the option in GT games with the release of GT5 in 2011. Now part of the GT6 release, the karting section of the game has come a long way over the span of three years.

Gran Turismo is the first video game of its kind in more ways than one. Partnering with Nissan Racing in 2008, Sony formed the GT Academy. Determined through a series of online challenges, the best GT gamers in the world were put behind the wheel of real racecars. The ‘gamers-turned-real-life-racers’ competed in a series of on-track challenges at the famed Silverstone Circuit in England.  In 2011, hundreds of thousands of GT5 gamers competed in online challenges to have a chance to compete on a real circuit for a chance at a professional racing career. 16 drivers were selected from the video game competitions to compete at Silverstone in a series of physical, mental and racing challenges. The North American challenge included a familiar and notable karter – 2009 Rotax Grand Nationals winner and 2013 Challenge of the Americas champion Phillip Arscott. One of the very first challenges the gamers took part in upon arriving at Silverstone was a kart race in wet conditions, and Arscott was among the best. Phil impressed the judges throughout the season to make it to the final episode, but fell short of winning the prize of joining the Nissan Racing team.

Winning the seat with Nissan Racing at the end of the Academy was Bryan Heitkotter. Never competing in wheel-to-wheel racing action until the Academy in Silverstone, Heitkotter had no real racing experience – karting or otherwise – until he was fighting for a seat with Nissan. Since joining the team, Heitkotter has made the most of his opportunity. In 2011, he and his team won their class at the Britcar Endurance Series at Brands Hatch. He was also part of the Grand-Am Continental Tire Sports Car Challenge team with the best qualifying time. In 2012, Heitkotter recorded a podium finish in the Dubai 24 Hours aboard a Nissan 370Z. 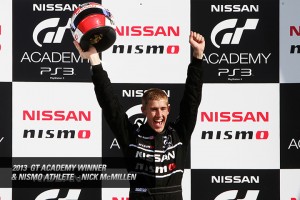 “The first track I ever drove at was in Southern California at a place called Amago, I believe.” McMillen recalled. “The fun part of karting was the speed and especially the G-forces you pull around the corners once you get in some of the faster karts.” Nick’s karting career never took off though due to his passion for motocross racing. “Motocross still won me over, mainly because of the jumps and being able to throw the bike around.”

McMillen says that when his busy schedule allows, he still gets out to some of the local kart tracks in Oregon, but hasn’t had a chance to do anything that serious with karts he says.

“I’ve always enjoyed karting and still try to go at least a few times a year.” McMillen said in an interview on his way to the 24 Hours of Dubai which he will compete with the Nissan Racing team in. “I like that GT6 has karting in it. I’ve only played with the karts a on the game a little bit. I think karting is harder to simulate compared to a road car in game. They seem to slide a ton more and the power in the game seems linear. I do really like that they are trying to get all aspects of four wheel racing in one game to make it well rounded.”

The chance to go from virtual to reality begins with playing the Gran Turismo series. For karting, the original courses offer fun and unique layouts. Perhaps the most unique are a pair of indoor tracks called “Kart Space I” and “Kart Space II”. Kart Space I is a 4/10 of a mile 11-turn circuit built in what looks and feels like a pinball machine. The 100cc kart was probably the best kart for these tracks, as it never got out of control, allowing you to stay in the gas most of the lap. The Gran Turismo Arena was a lot of fun also and the 125cc kart (Rotax) was my favorite kart for the arena circuit.

Choosing a race within the World Circuits tab will allow you to wheel a kart at some of the most famous racing circuits in the world such as Circuit De La Sarthe or Brands Hatch. American circuits include the infields of Daytona and Indianapolis, and my personal favorite, Laguna Seca. Flying around the high banks of Daytona, and hitting the corkscrew at Laguna Seca in a kart is a pretty wild experience. 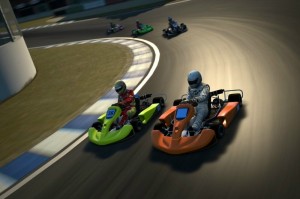 GT6 does a pretty good job in my opinion when it comes to the feel of driving a kart. In comparison to any of the hundreds of other cars you can pilot in GT6, the karts are very sensitive in all fashions. The steering input is very touchy and the karts drive with a very light feeling in the entry to corners. Aggressive braking isn’t punished as bad as getting on the throttle too early. Jumping back on the gas in the shifter kart or the Rotax (in a tight enough corner) will be sure to bring the back end around instantly. In the 100 and 125cc single speed karts, momentum is key, in a tight train a bad corner can ruin your lap. If you plan on hitting the curbs in GT6, you better be good at it. Certain tracks allow you to lean on the inside curbing while others will send you spinning quickly – the final turn at Laguna Seca at full speed would be an example of the latter.

Other than small things, such as the shifter karts actually changing gears before the driver actually bumps the shift lever, and all of the kart’s having a very convenient reverse gear, I was very impressed with GT6 and the kart racing in the game. In my opinion, GT6’s karting was a vast improvement from what was offered in GT5 and the fact that you can take these karts on so many tracks is awesome. Additions to the karting side of the game that I can think of would include more karting specific tracks. Historic karting tracks like Adams Motorsports Park or Santa Maria, or the more modern facilities such as Miller Motorsports Park or the GoPro Motorplex would be a great addition to the next GT game.

The GT series is a terrific racing video game franchise that has changed motorsport video games for a long time to come. With the addition and vast improvement of karting in GT6 I would recommend the game to any motorsports, karting or video game enthusiast around. I had a blast playing GT6 and I’m sure you will too!