Educational Weekend for Nicholas Brueckner at Rotax Challenge of the Americas 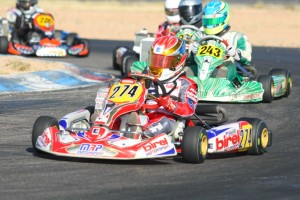 Nicholas Brueckner made his Rotax Challenge of the Americas debut this past weekend (January 24-26) at the Musselman Honda Circuit in Tucson, Arizona. Coming off two weeks of competing in Florida at the Winter Tour, the 12-year old Texan traveled west for his first Junior Max weekend at the international Rotax Max Challenge program. The MRP Motorsport/Birel America driver was primed for top-10 finishes on the weekend, but circumstances on-track prevented the talented young pilot from recording strong results. Nonetheless, he continues to show great speed in his first year of Junior competition.

Through the final few sessions of Friday practice, Brueckner was up to speed with the course and was able to break into the top-10. The competitive field took to the track on Saturday morning for qualifying, with Brueckner only a couple tenths off the top-five, although he dropped to 14th in the late going as other drivers with more experience at the track turned it up.  However, Nicholas put his talents to the test in the first wheel-to-wheel session in the series, showing his skill-set in the Prefinal as he drove his way up to ninth and set up for a solid run at the top-five in the main event. After losing a few positions at the start of the Final, Brueckner was well on his way forward, back into the top-10 by lap five of the 25-lap event. While battling for position on lap seven, Brueckner was spun around and rejoined the track well after the field had passed. After a few laps, he pulled off unable to continue due to damage to the kart.  While an official top-10 was thwarted, his potential and speed were most definitely acknowledged.

“The track in Tucson was fast but had its challenges, particularly with its bumps through some of the corners and the difficulty of holding your race line,” stated Brueckner after returning home from the weekend. “We were making up ground in the main event when two karts in front of me got together and swept me into their collision. I had nowhere to go and was collected in their wreck. It was a tough way to end the day.”

After repairs and some homework, Brueckner and tuner Tim Lobaugh made changes heading into Sunday’s action. The work paid off with a 10th in qualifying. Clean through the opening laps, Nicholas held the position through the 14-lap Prefinal. The Junior rookie appeared to be in position to record his first top-10 until the 19th circuit of the 25-lap event. Coming to the end of the long straight, another driver was attempting to overtake Nicholas and contact was made. Thankfully, he was able to keep control of his Birel machine and rejoin the race. Brueckner placed 18th when the checkered flag waved as he was able to make up a few positions in the closing laps.

“We were trying to move forward, but no one would work in a draft with me,” continued Nicholas. “While heading down the back stretch, I got hit from behind. The kart that made contact with me was pushing my rear bumper and tried to make a pass, but went too deep and hit me. I went into the rocks and it killed my momentum getting back onto the track. It was not the way we wanted to end the weekend, but know we have more speed and the ability to race in the top-five at future events.”

Nick is taking a weekend off before hitting the track for three weeks straight in February. He returns to the Florida Winter Tour on February 7-9 to contest the TaG Junior category during the Formula Kart weekend. The following week is double-duty at the Ocala Gran Prix circuit for round two of the international Rotax Max Challenge, competing in the Junior and Mini Max divisions. The three-week trip ends with a return back to the Rotax Challenge of the Americas, held at the PKRA in Glendale, Arizona.

About Nicholas Brueckner:
Racing out of Hockley, Texas, Nicholas Brueckner is a name you will be hearing more throughout the karting ranks in the coming years. At 12 years of age, Nick has spent less than four years in the sport, and has racked up impressive results and experience. From winning the Micro Max class at the 2012 U.S Rotax Grand Nationals and Mini Max championship in the 2013 Florida Winter Tour, to racking up wins at home in the SKUSA Texas ProKart Challenge, Brueckner is climbing the ladder quickly. Nick’s talents are far from being limited to just behind the wheel, however, as he is excelling academically, earning straight-As along with showing great leadership and people skills. Supporting Nick in his racing endeavors are the MRP Motorsport/Birel America team, Jose Castro/CMW Engines, Oakley Sunglasses and Savage Design.