Looking to the future, Crawford hopes to challenge for the overall series championship 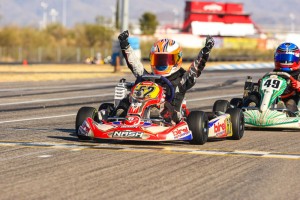 Birel driver Jak Crawford celebrates one of his two victories at the Rotax Challenge of the Americas (Photo: Sean Buur)

Eight-year-old Jak Crawford, from The Woodlands, Texas, has begun his Rotax career on a torrid pace. Starting in the Rotax Micro Max program in late October of 2013, Crawford managed to turn four months of development into a pair of feature wins this past weekend at the opening rounds of the Rotax Challenge of the Americas. Taking place at the fast and technical Musselmann Kart Circuit in Tucson, Arizona, Crawford was the class of the field and is the current point leader heading into rounds three and four of the series.

As the main Nash Motorsportz Micro Max driver, Crawford quickly took command of the large international field and turned heads by claiming Saturday’s pole position. Excited with the chance to start on the front row, Crawford’s chance would be nullified, as a post session technical disqualification would send him to the tail of the field. Patience and determination would rule the day for the young gun as he would need both to make his way forward from the last row on the grid.

Taking the green flag for the start of the prefinal, Crawford would quickly slice and dice his way forward. Before the halfway point, the Birel pilot smartly worked his way into a top-five position. Continuing his march forward, Crawford would make his bid for the win, as a quartet of karts would battle hard in the waning laps. A scuffle between a couple karts in the lead pack would send Jak into a spin and off the course where he eventually fell to the 11th position. Ending the prefinal and classified in the sixth position, Crawford would start the day’s main event from outside row three.

From the sixth position, Crawford worked quickly to the second position on the opening laps of the main event and from there, he and a fellow competitor worked together to break away from the field. While drafting and waiting patiently for his opportunity to pass, the leader would endure an on track mistake at which point, Crawford went for the lead. Quickly capitalizing with an aggressive inside pass off of turn four, Crawford and his Birel would never give up the lead again. He strategically held off the advances of his fellow competitors in the final few laps to take his first victory of the 2014 season.

Back to the track on Sunday, the entire Rotax Challenge of the America’s day would belong to Crawford. Claiming the pole position again on Sunday, the Birel driver would go on to win the prefinal event without challenge from behind. With chaos behind him at the drop of the green flag, Crawford jumped out to a lead and never looked back. Post race, officials penalized the Birel pilot for a start lane infraction. Adding a three second penalty to the overall session time for the up-and-coming champion would score Crawford in the fourth position. Though Rotax Challenge of the Americas officials admittedly made a mistake and agreed that the race should have been restarted, Crawford was not awarded the front row starting spot that he deserved, and instead would need to begin his quest for a second victory from outside row two.

Crawford began Sunday’s main event with a steady resolve, unusual for a young eight-year-old driver. Drafting and making clean passes along the way, Crawford began his march forward. Taking the top spot and leading most of the way, a pair of team drivers would get together in second and third, working together to try and catch the leader. Running Jak down and drafting by him, the Birel driver wouldn’t regain the top spot until the final circuit. As the duo tried to work past Crawford yet again in the first corner, the talented Texan pilot would slot into second as he looked to keep his speed and momentum going forward. Making a hole and getting by in corner four, Crawford drove to the win claiming his second victory of the weekend.

Jak Crawford would like to thank the following people for his successful West Coast Rotax racing debut. A special thank you to Seth Nash as tuning consultant, Chris Freckleton as engine builder/consultant and his mechanic Tyler Grant, all part of the Los Angeles based Nash Motorsportz team. Jak also wishes to thank 3G Racing/Team Burger King in Katy, TX and Birel America/MRP Motorsport of Three Oaks, MI for their equipment, encouragement, and consultation. Crawford is coached by Garret Boone, the 3G Racing/Team Burger King Birel shifter-kart driver from Houston. Jak’s East Coast team includes professional race tuning by Keith Leonard of New York and engines by CMW in Florida.

For more information on Jak Crawford and his racing program or sponsorship opportunities on how to partner with the future champion, please contact Nikki Crawford via e-mail to NikoCraw@gmail.com.