Thanks to the growth of current events and the debut of another, the 2014 national karting season is expected to surpass what was already a historic season of racing last year. One of the events that are sure to take the sport to another level is the Modesto Grand Prix, the site of the fifth annual Superkarts! USA SummerNationals. The Northern California city has partnered with the popular karting organization to host a three-day street race right in the heart of the city during the first weekend of August. Just after the New Year, the City of Modesto and Superkarts! USA hosted a press launch to introduce the citizens, then local media and city officials to the early plans for the race and the sport of karting, to be specific.

The City of Modesto is located about 90 miles east of San Francisco and 70 miles south of Sacramento, in Northern California. Over 200,000 people call the Central Valley city home.  The famed Modesto Arch is the city’s historical icon, which has featured the motto, ‘Water, Wealth, Contentment, Health’ since its construction in 1912. Famous filmmaker George Lucas is a native of Modesto. His popular film – American Graffiti – was filmed in Modesto, and is celebrated through numerous events that are held during the summer months, festivals that bring thousands of car fanatics into the area. 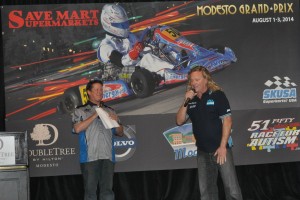 The Modesto Grand Prix was developed from the initial idea of a fundraiser for the Parks & Recreation department of the city. Countless programs are fueled by the department, including the upkeep of the many parks in the city, along with a number of youth programs. The group that was brainstorming the fundraising project included Scott Humphries, a motorsports enthusiast and former member of the karting community. After tossing around the different ideas for festivals that had already been done within the area, he pitched the idea of a karting grand prix within the city streets.

“It was something I have had tucked away in my mind for the past six years that I have worked with the City of Modesto,” stated Humphries, when speaking to EKN regarding the development of the Modesto Grand Prix. “We all agreed that we wanted an event that would provide a great family atmosphere and, in return, promote what the City of Modesto has to offer. When I showed my colleagues a highlight video of the SuperNationals, we began to put it down on paper and form a plan to host an event.”

One of the first contacts that Humphries made was with the Superkarts! USA office. Humphries’ brother Eric was a former SKUSA ProMoto Tour competitor, and he felt that the organization would be a perfect fit for what he wanted to present to the city. After a few calls to the office, he was able to convince Superkarts! USA President Tom Kutscher to visit the city and see what Modesto had to offer. The trip convinced Kutscher that it could be done, and the planning went on to the next stage. With the assistance and major support from Modesto’s Julie Hannon, Andy Johnson and Mary Otten, the Grand Prix concept moved forward through the different meetings and voting procedures to officially lock in the event with the City of Modesto.

“Northern California has a strong history of racing in the area,” continued Humphries. “There are a number of notable racing families and numerous generations that hail from Modesto, Stockton, and other cities throughout the region. I know race fans and car enthusiasts will make it out, but our mission is to bring in people not familiar with motorsports or karting. We have one chance to prove to the city this will work and become a great annual event, and introduce the sport of karting to the many families we anticipate attending the festival. We have already signed up a number of sponsors and supporters for the event, including Save Mart Supermarkets as the title sponsor. So now, moving forward, it’s a ‘go big or go home’ mentality for the next six months as we prepare for the inaugural Modesto Grand Prix.” 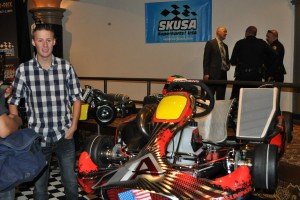 Cory Milne and Aluminos provided a Stock Moto and TaG kart for display, and to test the Modesto GP circuit (Photo: Joanne Azevedo – City of Modesto)

On January 10, city officials and Superkarts! USA hosted a news conference at the DoubleTree Hotel to make the official announcement for the August 1-3 event. SKUSA President Tom Kutscher was on hand to answer questions. The Modesto Mayor, city council members, and other government officials were all on hand. All the major new outlets from the Sacramento area, local media and other special guests were there to learn more about the event, along with an introduction of the sport of karting through display karts courtesy of Aluminos. Drivers Fritz Leesmann and Cory Milne were on hand with owner Rob Soares, to give the inside perspective of karting to the attendees, along with added information from Kutscher and EKN’s Rob Howden, who emceed the press launch.

“It was a great introduction and eye-opening experience for the people of Modesto,” expressed Tom Kutscher, president of Superkarts! USA. “We came into the press conference knowing that many in attendance believed that the karting that we were bringing to their city was the average fun kart at the local fun zone. The hour-long presentation with Scott Humphries from the City of Modesto, along with Howden, and myself included the presentation of the Aluminos karts, the video of the SuperNationals, and statistical information.  All this turned around their thoughts in an instant.”

Humphries backed up the statements made by Kutscher when we asked him about his personal discussions with the attendees of the press conference. “The attitude of the majority was overwhelmingly positive. They were blown away by the presentation and impressed by the look of the Aluminos karts we had on display. Our goal was to relate what Superkarts! USA does in karting is to what Formula One does for open wheel racing. After seeing them on display, many took their own personal time to come out Saturday and see them first hand around the streets of Modesto.” 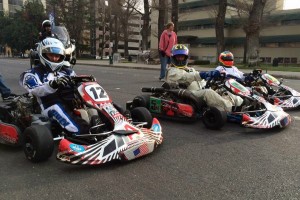 “We had private meetings with city council members, VIP members already signed up for the event, and potential sponsors to answer any questions they have about what Superkarts! USA can present to their city, in addition to the history of the sport. The economics of the event is something many were not aware of. We’ve built a program that will allow for the city and all the many businesses in the area to make money, rather than lose it. That is something we can build on for the future events in Modesto, and allow SKUSA to take it to other cities for future events. I really feel this will be as big as the SuperNationals with all the marketing and effort we are putting into the Modesto Grand Prix. We are providing areas around the course for regional tracks and clubs, along with certain industry members, to give the general public the next step in getting involved in the sport. It’s going to be a win-win for everyone involved, the city, SKUSA, the racers, teams, and the sport in general.”

The following day, Superkarts! USA owner Tom Kutscher, along with Aluminos owner Soares and EKN’s Howden, jumped into a trio of Aluminos karts to test out the proposed track layout for the August 1-3 event. The basic design of the course is laid out within the 10th to 12th Street and I to K Street coordinates, featuring a ‘Tetris’-like shape that includes six right-hand turns and two left-hand corners.

“We opened up some eyes during the track test,” continued Kutscher. “It was a quick turn around for the city officials, who thought this was a joke until they saw the Aluminos Stock Moto karts fly past them on the streets. We were given a certain area of the downtown district to work with, and came up with a basic idea. After taking the karts around the course, we’ve made a few tweaks to the original design. It’s going to be super wide, and super fast, but safe, as we always do with the tracks we race on. Another thing that will take this event to the next level, is racing under the lights. No other street race in America has done this, and it will be something you have to experience.”

The course will be surrounded by a number of activities throughout the weekend, including food and drink vendors, beer gardens, car shows and other activities for the family to enjoy. Pedestrian bridges will be constructed at two locations around the course, making it easier for spectators to work around the nearly 1-mile course to view different areas of the on-track activities. Paddock space will be spread out, near the intersection of K and 11th street, utilizing closed streets and parking lots.

The vibe surrounding the event has been growing ever since the announcement was made back in September, from both the city and those in the sport. Humphries and his crew will be working hard every day until the trailers begin lining up for paddock parking, with the notion that this will be unlike any other karting event. Racers and teams are anticipating what is to be a memorable inaugural event, and taking the Pro Tour to the city streets in a SuperNationals-like atmosphere. Come August 1-3, the city of Modesto and street racing will never be the same.

A countdown clock is running at the events website, which can be found at www.modestogp.com