The 2014 season kicked off nicely this past weekend (January 24-26) for the growing CRG-USA race team, which made the trek to the opening two rounds of the Rotax Challenge of the Americas in Tucson, Arizona. Heading south to the popular and fast Musselman Honda Circuit, CRG-USA brought a trailer full of racers ready to contend for race wins, beginning the championship chase in the Rotax Max Challenge categories. The weekend was a very successful start to the 2014 campaign, opening up with six podium finishes in the DD2 divisions.

“Overall, it was a great weekend with strong performances from our DD2 drivers Sabré Cook, Christian Schureman and Andy Lee,” commented CRG-USA owner Stacey Cook, upon arriving back home in Grand Junction. “In his first DD2 Masters weekend, Ben Johnston got on the podium both days with great drives. Joey Wimsett returned to the Rotax Senior category after clinching the Superkarts! USA S1 Pro Tour title, and gave us some great feedback and data to help grow our single-speed program. After a challenging off-season for our family, it was nice just to see so many friendly faces at the race track and to see our drivers competing for victories.” 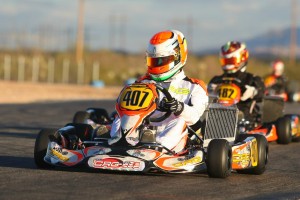 CRG-USA flexed its muscle in the DD2 field in Tucson, where they supported three drivers. Sabré Cook and Christian Schureman put the team on the podium in the first day of racing. Starting in qualifying, Schureman began his DD2 debut showing some impressive speed. The Colorado racer laid down the second fastest lap in the DD2 category, late in the session. New CRG-USA member Andy Lee joined Cook in qualifying third and fifth, respectively. In the heat race, teammates Cook and Schureman engaged in a three-kart fight with Gavin Reichelt for the top spot during the second half of the race. Cook would take the point and lead the pack across the line for the provisional win. Unfortunately for Cook, a lost side pod that left her kart during the white flag lap would relegate her to the last finishing position. As a result, Schureman Inherited Cook’s heat race win and pole position for the main event. The Saturday final was a wild one, as Cook dropped the hammer from the back of the pack and was into the lead by lap nine. The last 10 laps saw Cook and Schureman challenge each other, as well as Reichelt, for the remainder of the race. In the end, Cook had to settle for second and Schureman for third, a strong effort in third in his first COTA race. Lee, a top-five finisher in the 2013 Pirelli World Challenge GTS championship, would finish Saturday’s main in the sixth position.

Sunday started off very well for CRG-USA once again, as they went 1-2 in DD2 qualifying. Cook set the pace early in the session, but was edged out by Schureman. The two teammates were separated by a mere two hundredths of a second at the session’s end.  In the Prefinal, despite losing the lead early, Schureman would pull out the win as Cook battled to fend off advances from Lee to finish third and fourth. The main event was once again a three-kart battle, including Schureman, but this time Lee was in the fight, as Cook was off-pace and eventually retired with electrical issues. The top three drivers raced hard in the final laps with Schureman taking plenty of looks to secure the top spot. On the final lap, Lee took advantage of a bobble made by Schureman to take the second spot, which still gave CRG-USA a 2-3 finish for a second straight day.  The DD2 squad is very excited about making the trip to the second round in Phoenix, so that they can improve on their results and score their first series wins. 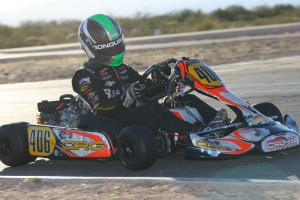 Joining the DD2 racers on the track in Tucson all weekend were the DD2 Masters racers. Over the off-season, CRG-USA and Denver kart shop Billet Performance Karting joined forces, and that partnership was in full effect. The result brought Masters driver Mike Urban under the CRG-USA tent full-time in 2014, and partnering with Urban in DD2 Masters was Oregon driver Ben Johnston, who was making his DD2 debut. Urban spent the weekend learning the nuances of his new CRG chassis, while Johnston adjusted to the two-speed Rotax engine after running all of 2013 in S4 Master Stock Moto. Urban drove to fourth place finishes on both Saturday and Sunday while Johnston left Tucson with two podiums after back-to-back third place results.

After a very successful 2013 season with CRG-USA, Rotax Grand Finals DD2 runner-up Joey Wimsett moved to the stacked Senior Max field for this year’s Challenge of the Americas to help develop the CRG chassis and gain data for the race team. Saturday started with Wimsett nearly cracking the top-10, as he picked up six spots in the Prefinal to finish 13th. Starting on the seventh row for the main, Wimsett got through the opening corner chaos without any damage, but slipped down the leaderboard to the 15th position. The checkers flew with Wimsett in the 12th position, although he would be credited with a ninth place result after post-race penalties. Sunday’s run started off better for Joey as he qualified his CRG 14th on the grid. A great opening lap of the Prefinal launched Wimsett inside the top-10, where he would stay most of the heat race. Once again, Wimsett was a victim of aggressive driving at the start of the main event, dropping him down the order in the first circuit. Wimsett spent most of the race moving forward, finding himself just outside of the top-10 in 11th when the checkered flag flew  All in all, it was a strong outing for Wimsett and CRG-USA in the Senior Max class, as they gained a incredible amount of data and useful tuning knowledge that they will use in Phoenix. 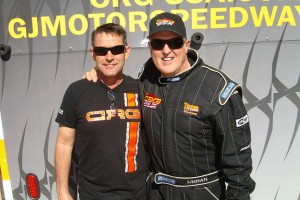 Grand Junction’s Riley Cook joined his family and race team in Tucson for the opening weekend of 2014 in the very competitive Junior Max field. Cook returned to national level racing for the first time after sitting out all of 2013. Cook fought all weekend and showed that he has plenty of the mental toughness and ability to compete on the national level. Unfortunately for Cook, his main event on Saturday ended nearly as quickly as it began, completing only one lap after his engine’s pulse line broke loose. Sunday was a better day for Cook, bouncing back from adversity to bring his CRG to a 25th place finish to close out his weekend. Mexican driver Esteban Jimenez joined CRG-USA in Tucson, as the youngster contested the Micro Max category. Jimenez left Tucson with a pair of 18th place finishes after two days of racing.

CRG-USA returns home to western Colorado where they will now prepare for the next round of the Rotax Challenge of the Americas at the Phoenix Kart Racing Association in Phoenix, Arizona on February 21-23. CRG-USA is primed for an outstanding season and future, with great opportunities for drivers to be part of the growing race team or businesses looking to promote the world-championship CRG brand as part of the dealer network. Anyone interested in joining the team should contact Stacey Cook at 855.TEAMCRG or via email info@crg-usa.com. Be sure to watch for the newly designed www.crg-usa.com and ‘Like’ them on Facebook.