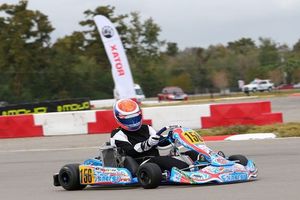 Rotax Junior Competitor, Thomas Issa was recently reinstated to 8th position from his 2013 Rotax Grand Finals exclusion at NOLA Motorsports Park.  Haven been excluded after a stellar eighth place finish in the final, Issa will now enjoy the fruits of his solid outing from the 2013 Grand Finals event.

Issa, a fifteen year old driver who primarily competes in North America enjoyed a successful season, which was highlighted by winning the Rotax Jr. championship in the prestigious Florida Winter Tour series.  Earning his ticket to the 2013 Grand Finals through this championship, Issa positioned himself atop the charts during the entire 2013 Grand Finals event, which for the first time in history was held in the United States at NOLA Motorsports Park in New Orleans, LA.

During the 2013 Grand Finals event, Issa clocked the sixth fastest overall time in qualification proving his speed amongst the world’s best in what would be his last junior race.  Issa, who finished within the top five in all of his heat races, firmly positioned himself with an overall ranking of fourth heading into the pre-final event.

Starting fourth in the pre-final, Issa placed himself amongst the finest drivers throughout the remainder of the pre-final and final events.  After a solid final competing as high as third place in the early stages, Issa crossed the finish line in eighth place only to realize after post weighing that he had been excluded.

Having been unaware of any infractions by Thomas, the team moved forward with the appeal process in order to officially reinstate Issa. Utilizing the correct appeal process, Thomas Issa’s eighth place finish at the 2013 Rotax Grand Finals has been successfully reinstated.