Indiana based company competes on both Formula Kart and Rotax weekends 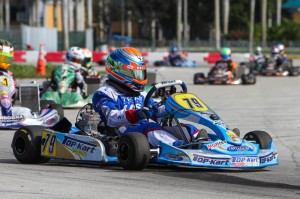 Making the trek to south Florida, Top Kart USA would make their Formula Kart Productions Florida Winter Tour debut. Traveling to the Homestead Karting facility on the grounds of the famed Homestead-Miami Speedway, Top Kart USA would have drivers compete on both the Formula Kart and Rotax weekends coming home with five top-ten results, a pair of podiums and one main event victory.

On track January 10-12 for the Formula Kart weekend, five drivers would take on the competition, as three would enter the TaG Junior ranks while two would see action in TaG Cadet. Off to a quick start during Friday’s unofficial practice, all junior drivers Zach Holden, David Malukas and Abby McLaughlin paced in the top-ten as hopes were high heading into Saturday’s qualifying and wheel-to-wheel competition. With qualifying to take place Saturday morning followed by two heat races, the grid would be set for the day’s main event.

Racing luck came into play on Saturday during the main event with both Holden and Malukas getting caught up in first corner incidents. Malukas’ Top Kart would be sidelined for the remainder of the event while Holden would reenter the race at the tail of the field. Progressing forward lap after lap, Holden had a solid drive forward and came home with an impressive sixth place result. McLaughlin narrowly missed the top-ten finishing in the 11th position. 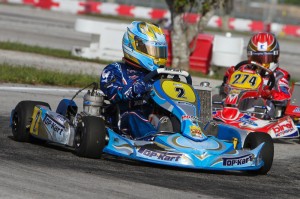 Zach Holden was upside down at one point, but still salvaged a podium result (Photo: Studio52.us)

Sunday would prove to be another rollercoaster day for the TaG Junior drivers as both Holden and Malukas were off in qualifying and would only turn the eighth and tenth quickest times of the session. Working their way through the heat races, Malukas would score a second and a fourth giving him a great starting position for the main event, while Holden would be third in heat one and suffer a nasty incident that saw his Top Kart upside down in heat two. Both drivers would have outstanding drives in the main event as Malukas was able to take the TaG Junior victory with Holden coming from deep in the field to put two Top Kart competitors on the podium as he would cross the stripe in third. McLaughlin would continue to gain experience at the Florida Winter Tour claiming another top-fifteen result with a 14th place finish.

“An outstanding finish on Sunday for our TaG Junior drivers gives them momentum going into the next round in Ocala,” explained Top Kart USA’s Bill McLaughlin Jr. “We have now proven to compete at this level as the Top Kart chassis performs against some of the best drivers in the world. Putting not one but two on podium really opens the eyes of our competitors.”

In the TaG Cadet ranks, Top Kart USA would enter a pair of competitors in Lance Fenderson and Stone Slattery. While both drivers had a trying weekend, Fenderson was able to claim eighth and 11th place finishes and will look for a podium at the next event in Ocala while Slattery logged a pair of 23rd place results in his first ever Florida Winter Tour TaG Cadet event.

Back on track the following weekend for the international Rotax Max Challenge weekend of the Florida Winter Tour, Malukas would be the only driver looking to put Top Kart at the front of the field. Struggling early, the talented driver would run into trouble during qualifying for Saturday’s competition as his rear axle shifted, causing him to retire from the session. Having to start at the tail of the field in the last chance qualifier, Malukas drove to a sixth place finish qualifying for the day’s competition. With more laps on his tires than his fellow competitors, Malukas drove from 34th on the grid to 11th in the prefinal and would set himself up for an inside row six starting spot for the day’s main event. Starting 11th in the main event, Malukas charged forward to sixth but would end his day with an eighth place result.

Sunday would see Malukas qualify directly into the show with a 19th place effort. Looking to improve forward throughout the prefinal, the future champion’s progress was slowed after mayhem in the first corner would see him lose a few positions. Ending the heat in 16th, Malukas would start the main event from outside row eight.

Avoiding incidents at the start of the main event and moving his way forward from sheer speed, Malukas quickly worked his way inside the top-ten. Continuing his march forward, the Top Kart pilot would make it all the way to fifth before ending his weekend in the seventh position.

“It was good couple of weekends for us at the Florida Winter Tour,” expressed Top Kart USA’s Blake Deister. “We learned a lot as a team and will come back stronger and more prepared for the next round in Ocala.”