This past weekend Rolison Performance Group headed out east to compete in the opening weekend of international Rotax Max Challenge program at the Florida Winter Tour. The six round – three weekend – series kicked off this past weekend in Miami at the Homestead Karting facility. Led by Mike Rolison, RPG supported five drivers across five very competitive classes. Led by podium finishes from Matheus Morgatto in Micro Max and Austin Versteeg in the Junior Max field, the RPG drivers completed a successful first round of the 2014 FWT before turning their sights on to the opening round of the Rotax Challenge of the Americas in Tucson, Arizona.

Brazilian Morgatto joined RPG in Florida for the opening weekend of the FWT Rotax series, competing in Micro Max. Morgatto showed speed early, posting the fourth quickest time of the Saturday qualifying session. Morgatto improved one position in the prefinal, earning him a third place starting spot for the main event. It was a terrific start for Morgatto, working his way up to second place by the beginning of the third lap. Matheus stayed on the heels of the leader until two laps remained when he made his move for the lead. Taking over the lead, Morgatto crossed the line first as the karts flew across the finish line black and checkers waved. Morgatto however would be penalized by race stewards for blocking, dropping him from first to third place. Sunday, Morgatto climb up the leader board several times. After qualifying seventh, Morgatto drove to a fourth place finish in the prefinal. Matheus then put on a clinic of race craft in the main event after dropping back to 23rd following a wild start. Morgatto slowly picked his way through traffic, passing at least one driver a lap nearly the entire race. In the end, he fought his way back to a top-10 finish in eighth place. 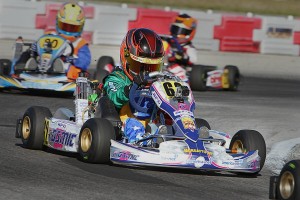 RPG driver Austin Versteeg rebounded very well on day two of racing after a tough opener on Saturday. Versteeg started round one off solidly with an eighth place run in qualifying, but lost some positions in the prefinal. Versteeg would get shuffled out in the main event, eventually placing 23rd. Sunday was a much better day for the Utah racer. Versteeg laid down the fifth fastest lap in qualifying, earning him an inside row three starting spot for the prefinal. Running in third nearly the entire race, Versteeg would finish the race in third but penalized two positions for cutting the track. Starting the main event inside row three, Austin drove forward to the third position early and would stay there until the checkers waved, putting him on the podium to end the weekend.

Caio Callet visited the Florida Winter Tour as a guest through the Brazil Rotax Max Challenge program, and had a solid weekend in the Mini Max class. Saturday, Callet drove to a ninth place finish after qualifying 12th. Sunday, Callet improved each time on the track. Qualifying 10th in a field over 40, he improved to ninth for the start of the main event. Callet dropped the hammer at the start of the main event, running up to fourth by the second lap, where he would hold on to complete the 14-lap feature to complete his first Florida Winter Tour and Rolison Performance Group experience.

RPG supported Texas driver DJ Ortiz in the Masters Max category. He would qualify in the 16th position, where he ended up after the main event on Saturday. Sunday saw good improvement for the first time RPG driver, qualifying 13th and working up to a 10th place finish when the final checkered flag fell. Former SuperNationals winner Joao Vieira contested the Senior Max division, which featured a number of talented drivers. Joao was 19th in qualifying for round one action, but contact dropped him back to 31st in the main event. He would claw his way back up to 21st. Sunday put Vieira 20th on the prefinal grid, gaining seven spots to set up for a run at the podium in the final. It was a stellar run for the young Brazilian as he knifed his way up to fifth. The closing laps saw some hard racing for a position inside the top five, and Joao was a victim of contact on the last lap, dropping him off the track and out of the race. 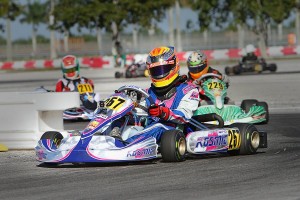 Overall, it was a successful outing in Homestead for the RPG race team, growing its members for the FWT program and welcoming new racers to its stable. This weekend, it’s a total of 16 drivers under the Rolison Performance Group tent for the opening rounds of the Rotax Challenge of the Americas program. The team spent a weekend testing at the Musselman Honda Circuit in Tucson, Arizona prior to their Florida Winter Tour trip, and now returning to the CopperState to continue its winning ways at The Challenge.

Reigning champions Phillip Arscott and Blaine Rocha return, this time competing in the same category. Arscott was the top driver in Senior Max, winning three of the six main events in 2013 en route to claiming the Rotax Grand Finals ticket up for grabs. Rocha is graduating from Junior Max, and will be a Senior rookie in 2014. Luke Selliken and McKay Snow will also move up the ranks for their first year in Senior Max, making their debut in Tucson. Parker McKay rounds out the Senior Max roster for RPG, coming into the weekend as the defending round one winner.

The Junior Max roster sees a rejuvenated squad with the departure of last year’s top drivers. Austin Versteeg was among the top drivers in 2013, and will lead the RPG squad in 2014 coming off a fourth place in the COTA standings. Kyle Wick is making a return to The Challenge after missing last year’s program. The Washington driver is coming off a solid victory at the Can-Am Karting Challenge against similar competitors for this weekend’s event. Joining the RPG program in Tucson will be Colorado driver David Rafailov and Northeast pilot Dhyllan Skiba – both jumping up from the Mini Max division. Canadian Jeff Fulham joins the operation with support from Kevin Glover Karting.

Justin Peck returns for redemption after coming up just short in the championship chase for Masters Max. The Utah driver is determined more then ever, and is set on competing for the title once again under the RPG tent. Can-Am Karting Challenger racer Chad Wallace will join Peck in the Masters Max division, competing in his first Challenge event. Brent Harper also returns to the COTA program, looking to challenge in the DD2 Masters standings.

Three drives complete the youngest end of the Rolison Performance Group driver list for Tucson. Conner Wick will be the lone RPG driver in Mini Max, making his Challenge debut. NorCal driver Tait Blum and Josh Pierson – with support from Neliton Race Concepts – are set to battle in the Micro Max category.

Rolison Performance Group is taking requests for Arrive-n-Drive programs or transportation opportunities at the remaining Florida Winter Tour and Rotax Challenge of the Americas events – along with early planning for the Superkarts! USA Pro Tour and Can-Am Karting Challenge. For more information on all the services that the Rolison Performance Group has to offer, visit www.rolisonperformancegroup.com or find them on Facebook.

About Rolison Performance Group:
The Rolison Performance Group is a leading race team and prep shop in American karting, and is also a RotaxServiceCenter and a Kosmic chassis dealer. Owner Mike Rolison, known as “Roli” at the racetrack, has built a career coaching some of the best kart racers on the West Coast. Over the past decade, he has helped 100′s of drivers and mechanics improve their craft. Mike brings world class driving and coaching experience to every racer he works with. Drivers that have been part of the Rolison Performance Group team over the past few seasons have recorded a number of national victories, claiming Superkarts! USA Pro Tour and Rotax Challenge of the Americas titles. RPG provides trackside support and arrive-and-drive programs for many series, including the Florida Winter Tour, Challenge of the Americas, US Rotax Grand Nationals, Pan-American Challenge, SKUSA Pro Tour, Can-Am Karting Challenge and the SKUSA SuperNationals. The team is a Kosmic chassis and product line dealer and is proud to campaign karts on the regional and national stage.