AM Engines Kicks Off Florida Winter Tour with Strong Results

AM Engines and AM Chassis stand atop the podium in Homestead 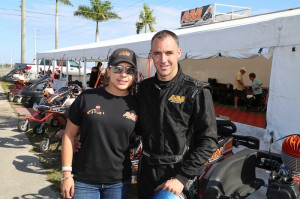 The AM Engine, Race Team and Chassis program is front and center at the 2014 FWT (Photo: AMEngines.com)

It was an incredible start to the 2014 Formula Kart Productions Florida Winter (FWT) for AM Racing Team as the Florida-based squad managed to secure multiple podiums results and main event victories. Competing at their home facility of Homestead Karting on the grounds of the Homestead-Miami Speedway, AM Racing Team was at the front of the field in nearly every division entered.

Kicking off the January 10-12 weekend for the Formula Kart classes, Masters Shifter driver Ariel Castro would dominate his class. Taking home both Saturday and Sunday main event victories, Castro is the outright favorite to claim the series title. With plans to compete during the Rotax weekend, Castro traded in his driving suit for some tools and shifted his focus to his engine tuning and AM Racing Team.

TaG Cadet drivers Tyler Gonzalez and Gianluca Petacof gave the team another four top-five results during the Formula Kart weekend as they both finished inside the top-five in TaG Cadet. Gonzalez claimed a third place result on Saturday while Petacof crossed the line in fifth. Sunday would see the two drivers swap positions with Petacof on the podium in third.

Seve DePinto and Olivier Bellanger would be the AM duo entered in TaG Junior and both showed speed throughout the weekend. Both drivers were at the front of the field but on track incidents and bad racing luck would hinder their results. TaG Senior pilots Dominic Tesoro, Collin Warren and Ignacio Salvucci would follow in the footstep of their younger TaG Junior competitors as all showed speed to compete in the top-ten but at the end of the day, results did not equal their true speed.

Back to the track the following weekend for the international Rotax Max Challenge program, AM Engines and AM Racing Team dominated the Rotax Mini Max field. Gianluca Petacof took both main event victories and a commanding point lead while Santiago Terife claimed fifth and second place results. Tyler Gonzalez had some bad racing luck on Saturday but managed to rebound Sunday to finish fifth.

Jordan Perry would be the AM pilot in the DD2 category, as he would try the two-speed engine platform for the very first time. Showing speed around the tricky Homestead facility, Perry would be a victim of on track circumstances.

Ryan Norberg would add a pair of top-five results to the AM Racing resume, as he would secure fifth and fourth place results over the weekend. Santiago Terife would enter the Rotax Junior ranks for the first time ever and showed speed to run inside the top-ten all weekend long.

AM Racing would have a quartet of drivers in the Rotax Micro Max field as all four qualified inside the top-ten. Jeremy Fairbairn would claim Saturday’s prefinal victory but a post-race technical inspection failure would send him to the tail of the field. Fairbairn would drive forward to claim a top-ten result in the day’s final and improved Sunday to finish fifth. Arias Deukmedjian crossed the line fourth on Sunday and stood atop the podium on Sunday with the main event victory. The brother duo of Anthony and Alessandro Famularo would also enter the Micro Max category with Anthony adding a pair of fifth place finishes and Alessandro coming home with a pair of top-ten results.

“I am very happy with the performance of the engines, chassis and entire team at the opening rounds of the Florida Winter Tour,” explained AM’s Ariel Castro. “Two years of hard work and development is paying off and we will be looking for more race wins and podium results at the next round in Ocala.”

AM Racing is also pleased to announce that Tony Tesoro will be launching a new satellite team that will travel to national events across the United States. With plans to compete at the SuperKarts! USA (SKUSA) Pro Tour, United States Pro Kart Series (USPKS) and Rotax Challenge of Americas, interested parties are asked to contact Tony Tesoro via e-mail to TonyTesoro0529@aol.com.

For more information on AM Engines, AM Chassis, AM Racing Team and arrive and drive opportunities for future events including the Florida Winter Tour, please contact Ariel Castro via e-mail to Info@AMEngines.com or visit them online at www.AMEngines.com.