DeAngelis and d'Orlandos stand on the podium 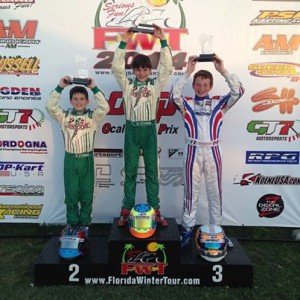 Looking to kick-start the 2014 season, Team Koene USA drivers did just that during the opening weekends of the annual Formula Kart Productions Florida Winter Tour (FWT). With four drivers on track during both the Formula Kart and Rotax Max Challenge weekends, a total of seven podiums including two main event victories and five pole positions were attained by team drivers.

The d’Orlando duo of Michael and Nicholas would steal the show in the TaG Cadet ranks as they swept the entire weekend of competition. Claiming the top spot in every official on track practice session, the brothers made history with their results. Competing aboard Koene USA prepared Tony Karts, Nicholas would take the pole position on Saturday with Michael taking the top spot in wheel-to-wheel competition.

Michael would take the heat race wins with younger brother Nicholas crossing P2 in the talented 31 kart strong field. Looking for success in the main event, Michael would claim maximum points on the day topping the blocks just ahead of Nicholas.

Sunday would see Michael take the pole with Nicholas claiming the second quickest lap of the session. Nicholas would then take his first career Florida Winter Tour victory with a heat one win before Michael took control once again. Topping the results again in heat two with a 1-2 finish, the duo continued their success in the main event sweeping the weekend.

Roman DeAngelis would show speed in TaG Junior as he managed to take the pole position on both Saturday and Sunday. Working through the heat races with decent results, DeAngelis turned up the wick in the main events to take his first career FWT podium results. Crossing the line Saturday with a third place result, the Canadian pilot improved on Sunday to come home second and is the current point leader in the TaG Junior ranks.

During the Rotax Max Challenge weekend of the Florida Winter Tour, Team Koene USA would once again be seen at the front of the field. Michael d’Orlando would take the Rotax Mini Max pole position on Sunday following his second place result in Saturday’s main event. With heat race wins on both Saturday and Sunday, Team Koene USA is proving to be a force in the 2014 Florida Winter Tour.

Michael d’Orlando would have claimed another podium result on Sunday but a post race technical inspection disqualification removed him from the results. An honest mistake was made when preparing the Rotax engine for competition and Team Koene USA takes full responsibility for the mistake.

“All team drivers did very well and the results prove this,” explained Team Principal Mike Maurini. “We will be a threat for race wins as we move forward through 2014. As for the technical disqualification, we take the blame but urge that it was an honest mistake. Priding ourselves on competing within the rules and coaching drivers to bring them to the next level, an oversight on a part was made and are really disappointed in the mistake.”

Jarrett Voorhies would join the squad for the TaG weekend of competition and showed constant improvement in the TaG Junior field. Improving with each passing session, Voorhies will be back behind the wheel of a Team Koene USA machine in Ocala for round two of the program.

Eduardo Barrichello, son for former Formula One pilot Rubens Barrichello would try his hand in Rotax Mini Max during the January 16-19 weekend. Having very little experience behind the wheel of a Rotax machine, Barrichello overcame some difficult situations to show speed in the main events. After winning Saturday’s last chance qualifier to make the show, Barrichello qualified directly into Sunday’s show on speed alone and constantly improved throughout the weekend.