Exciting Weekend for The DePintos 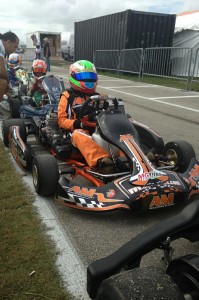 Seve DePinto readies for his TaG Junior session at Homestead Karting during the opening rounds of the Florida Winter Tour
(Photo: Vito DePinto)

After a disappointing start to the 2014 season where Seve DePinto was forced to miss the opening round of the World Karting Association (WKA) Manufacturers Cup program in Daytona due to a bad crash resulting in a full arm cast, the youngster returned to the seat at the annual Florida Winter Tour. Competing aboard an AM Chassis in the TaG Junior division, DePinto would show speed throughout the weekend battling at the front of the field but would have no racing luck.

After the removal of his full arm cast, DePinto would return to the seat with a half cast that was shaped for better steering wheel grip to ensure he could be on track as soon as possible. Showing speed throughout the unofficial practice day, Seve would qualify his AM Chassis inside row two during Saturday morning’s qualifying session and have a pair of strong results in the two heat races. Claiming the third place on the grid for the start of the main event, Seve would have a terrific start and maintain his position near the front of the field. Midrace contact would see him sent off the track and down the running order where he was eventually classified in the 18th position.

Back to the track on Sunday, DePinto would encounter an engine issue during the qualifying session. Working hard with his crew to correct the problem while the session wore on, Seve took to the track with only four minutes remaining and was able to turn the second quickest lap of the session and would start the first heat from the outside of the front row.

With no issues in heat one, DePinto’s heat two would be disastrous, as the inverted starting order would see some inexperienced drivers start at the front of the field. Coming through the pack, DePinto would be involved in an incident after he collided with a kart that had already been stopped on the racing circuit. With his AM Chassis destroyed, the young gun would sit on the sidelines for the rest of the weekend. Disappointed that his weekend was over, DePinto will return to the rest of the Formula Kart Florida Winter Tour cast free and look to fight for race wins and podium results. Seve is also looking forward to the new Florida Pro Kart Series presented by Glenn Biggs starting April 26th.

While Seve was on track, father Vito was also in the karting news over the weekend. Notified that he will be on the World Karting Association Board of Trustees starting on February 9th, 2014, Vito is excited to help grow the sport of karting and assist the national and regional programs. As a business owner himself and one of the former owners of RaceComplex. Vito and his eight years of karting experience are a perfect fit for the trustee position.

“I am excited at the opportunity and challenge that has presented itself. My passion for this sport has taken me through different channels of the racing spectrum which has led me to accept this position of trustee,” expressed Vito DePinto.

“It is nice that Seve can continue to develop his skills on the track, while I assist in developing a stronger racing community off the track. I am looking forward to it.”

Vito and Seve DePinto would like to thank AM Chassis, AM Engines, Ariel Castro, TS Racing’s Dave and Todd Spaude as well as his friends and family for all of their support.