CRG-USA Ready for Further Success in 2014 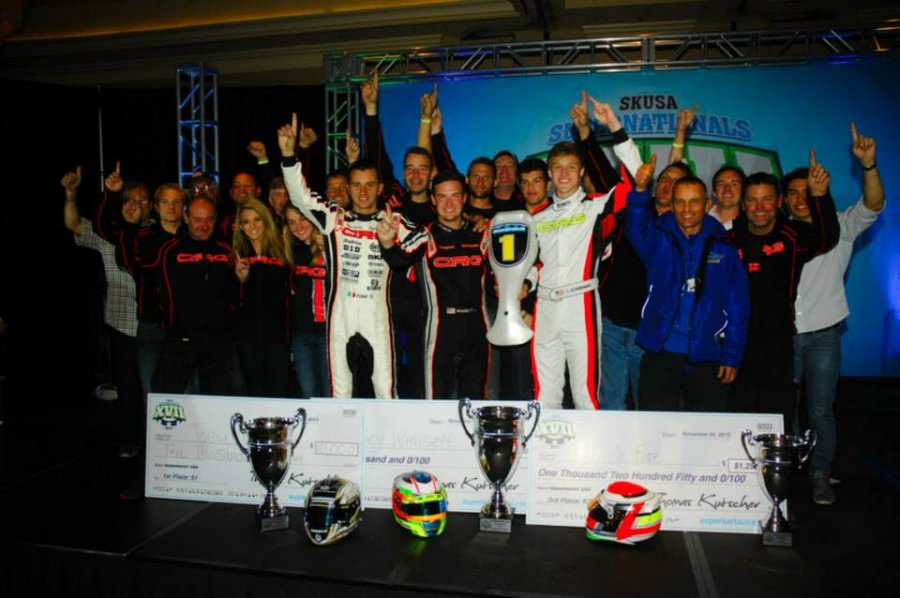 CRG-USA operation is primed for more success in 2014 (Photo: On Track Promotions - otp.ca)

Growth has continued month after month for the established CRG-USA operation. Created in 2011, the Grand Junction, Colorado kart shop and race team have garnered the respect of the karting industry and community. Their long relationship with the CRG chassis and products created an opportunity to become one of the North American importers, equaling into two years of solid growth for the brand, the business, and the race team. 2013 was a banner season, as CRG-USA became the #2 CRG distributor in the world, while the race team garnered numerous podiums, victories and championships at all levels. The momentum carried from the successful season will take the entire program into the 2014 racing year.

CRG-USA is a name that will be seen throughout the country, at karting events nearly every week. The winter season includes the return trip to the Rotax Challenge of the Americas program where CRG drivers will fight for tickets to the 2014 Rotax Grand Finals – the ‘Olympics of Karting’. During the month of March, CRG-USA returns for the Lone Star Grand Prix street race in Lockhart, Texas, supporting CRG drivers and dealers RPM Racekarts, Core Karting and Texas Karts. The Busy season starts when the warmer months hit, as the Superkarts! USA Pro Tour kicks off with events in May and August with CRG-USA fielding a solid roster of drivers already confirmed.

The operation continues its support of the Rotax Max Challenge program, fielding drivers at the US Rotax Grand Nationals in Utah mid-July, along with the Pan-American Challenge event. At the local level, CRG-USA will again be a major supporter of the SKUSA Rocky Mountain ProKart Challenge. The SKUSA SuperNationals XVIII in Las Vegas on November 19-23. CRG-USA drivers Joey Wimsett, Christian Schureman, and Sabré Cook are also scheduled to compete in selected KZ2 events in Europe alongside the factory CRG team.

As the race team expands, so does the dealer network under CRG-USA. Musgrave Racing Company (MRC), a growing team in Southern California, has signed on to be the regions CRG dealer. The Musgrave family is an established name in the motocross world, and has already gained notoriety in the karting scene in just a short time. Their enthusiasm will help preserve the CRG brand in the area. Billet Performance Karting has also added the CRG brand to its chassis roster for the 2014 season, under the CRG-USA dealer network. The Denver-based kart shop has a solid reputation in the area, and will help to continue the growth of the CRG brand in the state of Colorado.

This coming weekend, the Rotax Challenge of the Americas is set to kick off the 2014 season for CRG-USA. SKUSA champions Joey Wimsett and Christian Schureman led the squad, each looking for a chance at the Rotax Grand Finals tickets. Wimsett, a runner-up at the 2013 Rotax Grand Finals held in New Orleans, is trading in the familiar DD2 machine and have his hand at the competitive Senior Max division. Schureman will be making his DD2 debut, driving along Sabré Cook and Andy Lee. Cook, the 2012 S2 SKUSA Pro Tour champion, is making a return to DD2 after placing in the top-five at the 2012 US Rotax Grand Nationals. Lee, racing for the first time at the COTA and in DD2, is an instructor at the BondurantHighPerformanceDrivingSchool and driver in the Pirelli World Challenge.

Mike Urban from Billet Performance Karting returns to the series, this time with CRG-USA alongside Pacific Northwest driver Ben Johnston, also making his DD2 debut in the Masters class. Riley Cook in Junior Max and Micro Max driver Esteban Jimenez completes the CRG-USA roster for the opening rounds at the Musselman Honda Circuit in Tucson, Arizona.

CRG-USA is primed for an outstanding season and future, with great opportunities for drivers to be part of the growing race team or businesses looking to promote the world-championship CRG brand as part of the dealer network. Contact Stacey Cook at 855.TEAMCRG or email info@crg-usa.com. Be sure to watch for the newly designed www.crg-usa.com and ‘Like’ them on Facebook.