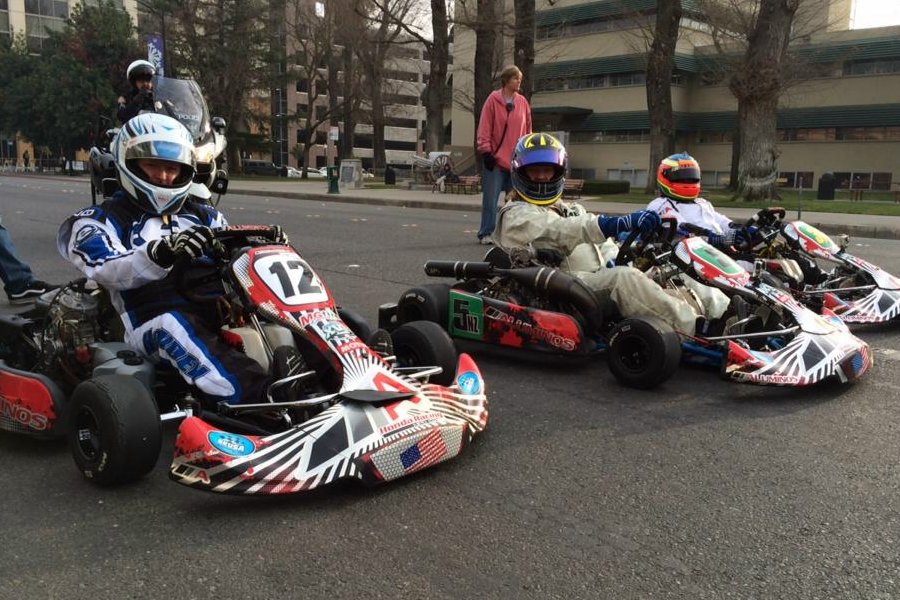 Have you ever been part of something at its genesis, something that you just knew was going to make a major impact in its community?

Well, I had that feeling late last week when I was asked to emcee the press launch of the upcoming Modesto Grand Prix, which will serve as this year’s Superkarts! USA SummerNationals, the second stop of the Pro Tour.  I’ll admit, I was expecting to host the typical stodgy informational session with local media…you know, the “I’d like to introduce Mr. SoAndSo”…and “please welcome Ms. Whatshername to the podium” type of deal.  Roll out the slide show, answer a few questions and away we go.  Standard deal…a little local education to build awareness and hopefully some media play.  We were also planning to get some ‘secret’ test laps on the street course on Saturday morning, so that fired me up a little, as it’s always good when you’ve got your race suit packed and your helmet bag with you. 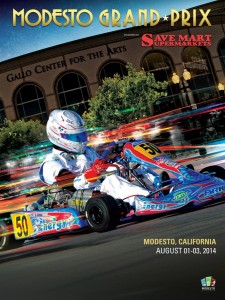 As you might now know from some of the chatter that has worked its way onto the social media channels, our trip ended up being so much more.  The press launch was held in the cool bar-style ‘Napa Room’ of the downtown Doubletree Hotel, Rob Soares from Aluminos brought in two brand new karts and set up a slick display manned by racers Fritz Leesmann and Cory Milne, Chris Ortenburger developed a clean and professional PowerPoint presentation and then the Modesto GP crew handed mics to myself and Tom Kutscher, giving us the stage and zero script.  The more I learned about the event during the Thursday night before the press conference, the more excited I became.  And when the room filled with cameras and media personnel, everything changed.  Tom and I dropped the hammer, brought the media up to speed about karting circa 2014, Chris fired up the SuperNats video, we showed off the track map, and then announced that we were running at night, under the lights.  The change in attitude over the hour was easily visible in the smiles and cheers from the gallery.

In the wake of the presentation, the cameras continued to roll as interviews were done with Kutscher, Leesmann and Milne.  Questions were asked and answered…these guys were in the spotlight for another half hour.  It was cool.

The concept was to educate the community on what was coming, what karting really is, and what the SummerNationals is going to bring to the city.  But the schooling wasn’t limited to the media and the people of Modesto.  I was part of this tutelage as well.  I learned that Modesto is a major league ‘car’ town.  This is the home of American Graffiti, and they love their hot rods and their motorsports.  Just like Lancaster and its growing Grand Prix, the city staff is fired up to make this race the biggest event in Modesto.  The ingredients are there for a big fan turnout, and a festival of kart racing that could reset the bar in our sport.  The city is planning a 150+ vehicle car show in the downtown core, a concert right in the race area, VIP tents and beer gardens surrounding the track and a pair of pedestrian bridges.  The potential is incredible.

To give you all a sneak peak, we’re putting together a video package from the trip to provide the EKN readership with a look at the racetrack, thanks to the GoPro footage from Aluminos’ Rob Soares, who hit the streets alongside Kutscher and myself on Saturday morning.  It all started with a 5:30 am debrief with the police, and then 40+ officers shutting down the core for two hours.  Our ‘secret session’ eventually resulted in a handful of people on every corner and every cross street, with smart phones recording our every lap.  We did short 4-5 lap stints to sample the track, the corners and the condition of the pavement. Adjustments were made, we dialed things up a little, and the resultant layout is the standard 90-degree corner street track, with some cool sections to make things interesting and penalize mistakes.  This won’t be the typical top-end racetrack.  I simply can’t wait to see how it all plays out.

To cap this edition of Morning Coffee, I want to point credit where credit is due.  Scott Humphries – the guy who has been fueling the development of the Modesto Grand Prix – is a man on a mission.  He comes from a motorsports family, as his brother Eric was a SKUSA racer in his junior years and now runs sprint cars in NorCal and the surrounding states.  Scott is focused on making this race the biggest in the country outside the SuperNationals, and folks, I think he can do it.   Everything is coming together, and if it does, this is going to be big for karting, and specifically, in Northern California.