This weekend marks the opening rounds of the FWT Rotax MAX Challenge portion of Formula Kart Productions’ Florida Winter Tour, presented by Ocala Gran Prix. The karting world has been alight with activity as racers from around the world make their way to the Homestead Karting facility just south of Miami for this weekend’s event. Many social media pages right now are filled with messages about new equipment being assembled, being on the road to Florida or what people have been doing since they’ve arrived.

As always, the Florida Winter Tour brings in some of the biggest names in the sport from all over the world. Topping that list this year is the recently crowned DD2 World Champion Simas Juodviršis (Lithuania). Simas will be competing in the SH Racing sponsored DD2 class and will have other world champions to keep him occupied in the likes of three-time world champion Ben Cooper (Canada) and CIK Champion Arnaud Kozlinski (Italy). Other big names to be competing in DD2 include multi-time FWT and US National Champions Daniel Formal and Nick Neri (USA), former Formula One driver Nelson Piquet, Jr., Dutch karting standout Jordi Van Moorsel, Swiss DD2 specialist Kevin Ludi and Canadian National Champions Zach DeMelo and Jeff Kingsley.

For Ben Cooper and Zach Demelo, DD2 won’t be the only action they see this year, as they are both also scheduled to compete in the MRP Motorsport sponsored Senior MAX category. Some top names that will be joining them in Senior MAX is 2009 Senior MAX World Champion Luke Varley (Great Britain), former FWT and reigning U.S. National Champion Oliver Askew,  and British star Ed Brand, who’s riding big momentum after his win last Sunday in the FWT’s Formula Kart Racing TaG Senior class. 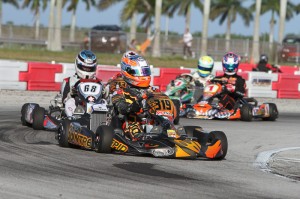 With each new-year it’s always interesting to see young drivers moving up to the next age class. This year, there are a gaggle of Mini MAX drivers making the move to the PSL Karting sponsored Junior MAX class. Most notably is 2013 FWT Mini MAX champion Nick Brueckner (USA). Nick will have his schedule pretty full because he’ll also be competing in the AM Engines Mini MAX class, along with the “dynamic duo” of Michael and Nicholas d’Orlando (USA), coming off an historic brother-one-two-double, finishing first and second in both finals of last weekend’s FWT Formula Kart Racing TaG Cadet class. Also making the move to Junior MAX is 2013 Micro & Mini Invitational champion David Malukas (USA). David was also a winner in the FWT Formula Kart Racing program last Sunday and, like the d’Orlando brothers and Ed Brand, is looking to take that momentum into this weekend’s event.

The Florida Winter Tour is not just the home of champions; it’s also where champions of other forms of motorsport send their kids to learn the finer points of intense competition. Returning to the Tour this year is former Formula One, NASCAR and now IndyCar star Juan Pablo Montoya’s son Sebastian Montoya (Columbia) in GT7 Motorsports sponsored Micro MAX.  And joining us for the first time is Rubens Barrichello’s son Eduardo Barrichello (Brasil) who will be racing in the Mini MAX class. Rubens has raced in in the Florida Winter Tour in the past and everyone is looking forward to seeing another Barrichello on the grid.

Of course, Eduardo Barrichello won’t be the only driver representing Brasil. Brasilian Rotax Distributor Wilton Santos has been doing an amazing job of promoting the Rotax MAX Challenge in his country and is sending Mini MAX driver Caio Collet to the Florida Winter Tour to compete in all three weekends of the FWT Rotax MAX Challenge as a prize for winning in Brazil.

AWARDS
The Florida Winter Tour has some pretty special awards. As most people know, The Florida Winter Tour Rotax MAX Challenge is an international qualifying program for the Rotax MAX Challenge Grand Finals. The FWT has a proud heritage of sending drivers to the Grand Finals who became that year’s champions. FWT can now claim five World Titles and seven podium finishes for drivers qualified through FWT. Most recently, South African Cristiano Morgado used his ticket from winning last year’s FWT DD2 Masters championship to become the only four-time Grand Finals champion. Not only that, but last year Scott Campbell claimed the second ticket that was being offered in DD2 Masters at the FWT and he finished second to Morgado in New Orleans giving the Florida Winter Tour a historic one-two finish at the 2014 Grand Finals. 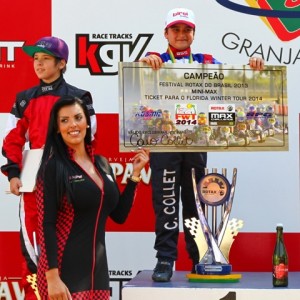 For 2014, there will be five spots awarded to the Grand Finals. Those tickets will be awarded to the champions in PSL Karting sponsored Junior MAX, MRP Motorsport sponsored Senior MAX, SH Racing sponsored DD2 MAX, Decal Zone sponsored DD2 Masters and, new for this year, Rolison Performance Group sponsored MAX Masters (MAX Masters champion will compete in DD2 Masters at the Rotax Grand Finals). Each of these champions will receive an expense* paid trip to the 2014 Rotax Grand Finals to find out  if they can add their names to the list of current and former Rotax World Champions who earned their RMCGF participation from the FWT.

During the six race days of the FWT Rotax MAX Challenge, drivers and teams will also be accumulating points for their chassis manufacturers and their home country. In its two year existence, the Manufacturers Cup and Nations Cup competition has been the source of pride for competitors from all over the globe and to those who are very brand loyal to their equipment manufacturers. During the last two years, the USA has taken the Nations Cup. But strong efforts from our friends from up north and from down south have kept the US drivers working hard to maintain their dominance. The manufacturers Cup has always gone right down to the wire and at this point of the season, nobody can make any accurate predictions as to who will come out on top.

DAN WHELDON / FWT KARTING AMBASSADOR AWARD
Karting can be like one big family. In the fall of 2011 we lost Dan Wheldon in a tragic racing accident. Dan was very beloved by many at the FWT and was truly part of our family. For the last two years, Formula Kart Productions president and owner Bill Wright has presented a memorial award to an FWT participant that demonstrates the special qualities that made Dan so memorable. This award is open to drivers, team owners, shop owners and anyone that has dedicated themselves to making our sport the best it can be. Bill will present this award to a deserving recipient this March at Orlando Karting Center. If you know of anyone you feel would be deserving of this award, feel free to nominate them by emailing us at info@FloridaWinterTour.com.

Of course, we hope to see all of you at this weekend’s event in Homestead. If you’re unable to attend, be sure to check out our live interactive broadcast, FWT Live! at www.FloridaWinterTour.com. Feel free to ask questions and send “shout outs” to your favorite competitors by emailing our FWT Live! staff at live@FloridaWinterTour.com.