This coming weekend, January 11-12, Formula Kart Productions kicks off the 16th season of The Florida Winter Tour, this year presented by Ocala Gran Prix. The opening rounds of the 2014 edition of FWT will feature the shifter and TaG classes of the FWT Formula Kart Racing program, contested at the popular Homestead Karting facility on the grounds of the Homestead-Miami Speedway.

At a time when many areas are experiencing colder temperatures, the promise of sunshine and spring-like weather can be reason enough to attend the Florida Winter Tour. However, as most know, the FWT is also one of the world’s best opportunities for racers from around the globe to hone and sharpen their skills in great weather against fierce competition before their usual summer schedules begin. As such, the Florida Winter Tour can be expected to pull in some pretty big numbers and names from the world of karting. With right at 200 pre-entries for the first Formula Kart weekend, we’ll take a look at a few drivers of note, and the awards they are chasing. 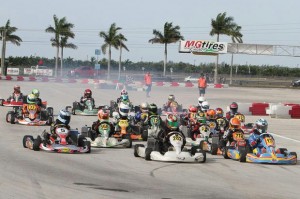 During the Formula Kart weekends in 2014 one example of the marquee names competing is multi-time U.S. National and FWT Champion Danny Formal. Formal recently announced a full factory ride with CRG as part of his 2014 karting program. Formal is the reigning FWT TaG Senior Champion and returns to defend his title, as well as take another shot at winning the FWT/Skip Barber Awards for a second consecutive year. We’ll catch up with him later this year to hear about his experience with Skip Barber Racing.

Other top names competing in the “FK” TaG Senior class, sponsored by Russell Karting, include Edward Brand. The British talent and reigning Canadian Senior National Champion Zachary Claman Demelo will be competing under the Goodwood/Intrepid Driver Program tent. The U.S. manufacturer iKart will be fielding two drivers on their very interesting American built chassis, with U.S. karting standouts Michael Giessen and AJ Myers looking to grab some Palms for the “home” team.

With the new season there are always many driver changes in the younger classes as the youthful competitors move up through the ranks. One such example is Canadian Mini Champion Antonio Serravalle, who will be making his junior debut at FWT in TaG Junior with power coming from a Parilla X30. Other notables joining Serravalle in the Ogden USA sponsored TaG Junior class are Canadian Junior Champion Gianfranco Mazzaferro and reigning FWT Mini Champion Nicholas Brueckner, also making his Junior FWT debut. 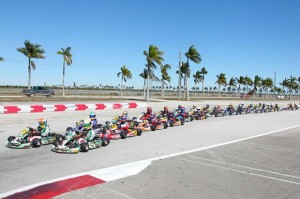 TaG Cadet will be the largest class once again during the ‘Formula Kart’ weekends (Photo: Ken Johnson – Studio52.us)

And speaking of “younger classes” the TaG Cadet class, sponsored by AM Racing Karts, will again feature the largest group of competitors in the FK weekend. Many new faces this year could shake up the status-quo in this popular class. Look for former front runners like Dylan Tavella and Mathew Latifi to make a mark. Sebastian Montoya will start his second year of FWT competition in the category. Could this be a winning open-wheel-year for the Montoya’s?

Big news for shifter kart drivers this year as the FK weekend will see a resurgence of the categories that built the FWT in its early years. Perennial front-runner Colin Daley Jr will headline the Open Shifter Category, sponsored this year by Bordogna Racing Engines. Former FWT Masters Shifter Champion Kurt Mathewson will feature strongly in this year’s Masters Shifter class, sponsored by Decal Zone. Kurt will be joined by a solid turnout of other Masters Shifter competitors, including one Petr Ptacek, the owner of Praga Racing. In International Racing USA sponsored Stock Moto, FWT Shifter winner Matthew DiLeo will be joined by a growing number of competitors ready to add some serious excitement to the FWT FK program.

A new addition to the FWT are the cost-effective Briggs LO206 classes. Scheduled to include Junior, Senior and Masters at the March rounds in Orlando, FWT will feature the senior class for the full FK schedule with support from Briggs and Stratton and Victory Kart. Rumors are running rampant about top karting names scheduled to compete for a shot at $8,000 in cash support and awards during the FWT LO206 CHALLENGE. No doubt some new faces will also play a role as FWT rolls out these new categories. For more information about how you can get involved see the News Story here.

In addition to the Briggs Challenge awards there are some other serious awards up for grabs this year in the FWT Formula Kart Racing program.

The previously mentioned Skip Barber Racing School Awards will provide approximately $23,000 in driver development support. This year the FWT/SBRS awards are exclusive to the FWT Formula Kart Racing program. This program is another example of SBRS’s mission to find the best racing talent and give them the opportunity to pursue their dreams. Drivers who wish to compete for these awards must register with Bill Wright at info@formulakart.com. See more details here.

Legendary karting engine manufacturer IAME has stepped-up to provide direct factory support to the FWT FK program. Drivers who race the TaG Senior and TaG Junior classes will be vying for awards valued at almost $10,000 for drivers who race on Leopard or X30 engines exclusively. See all the details here.

Vortex has also stepped-up with factory support of FK. They are providing inexpensive rentals and trackside support for drivers to use a RoK Shifter engine in the FK Open and Masters Shifter classes. In addition the top finishing driver in Open Shifter using exclusively a RoK Shifter engine will be awarded entry and consumables at the 2014 RoK Cup USA finals. See all the details here. 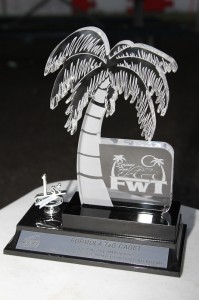 Koene USA has stepped up to recognize and award the drivers who secure pole position at this year’s FWT. Drivers will be vying for media recognition and a shot at $400 in cash. See all the details here.

Also returning to the 2014 Florida Winter Tour is the FWTs signature ‘Palm’ trophy. This popular new award made its debut in 2013 and features the Florida Winter Tour logo and frosted Florida palm tree. Competitors will have the opportunity to win these iconic trophies in all of the Formula Kart competition classes.

FWT Live!, Formula Kart Production’s ground breaking live streaming broadcast coverage, continues in 2014 and will provide viewers with streaming video and live timing and audience interactivity. If you’ve never seen an FWT Live! broadcast, be sure to log on to http://floridawintertour.com/fwtlive/2014/ beginning Saturday, January 11 to witness the action from the Homestead Karting facility. Send emails to the announcers at live@floridawintertour.com.

The Florida Winter Tour is owned and operated exclusively by Bill Wright of Formula Kart Productions. The FWT is one of the world’s longest running, largest and most geographically diverse karting programs. In 2013 the 15th Annual FWT featured more than 340 drivers from 26 countries and all six karting continents.