28 podiums as they look to defend Manufacturers Cup 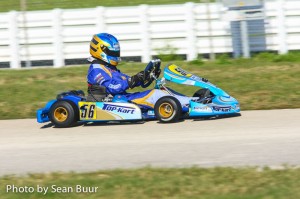 Top Kart drivers were seen at the front of the field throughout WKA’s Daytona Kartweek (Photo: Sean Buur)

Kicking off the 2014 World Karting Association (WKA) Manufacturers Cup program in late December, Top Kart USA once again flexed their muscles and proved their prowess. Competing on the grounds of the famed Daytona International Speedway in Daytona Beach, Florida, Top Kart USA chocked up 28 podium results including six main event victories as they look to defend their Manufacturers Cup title.

Patrick Olsen and Conner Ferris would lead the Top Kart contingent as both drivers scored a pair of victories during the opening weekend of competition. Olsen would double up in the Piston Port Senior class dominating the field taking both finals. Putting two Top Kart drivers on the podiums both days, Chase Jones would end Sunday’s main event fifth and improve on Monday to come home third. Cole Fink would also add a tenth place result.

Ferris would lead the way in the Yamaha Rookie ranks as he looks to make his run at the series title. Scoring both main event victories, Ferris has taken a strangle hold in the championship points battle and will look to carry his momentum into the second weekend of competition.

Top Kart USA drivers would be strong in the TaG Senior ranks claiming three podium results with four drivers. Calvin Stewart would improve on Sunday’s sixth place result to take the win on Monday to add another win to the Top Kart resume. Mark Boos and Firestone Indy Lights driver Gabby Chaves would also stand on the podium during Sunday’s main event crossing the stripe in second and third. Unable to improve on Monday, Boos and Chavez would finish eighth and tenth. 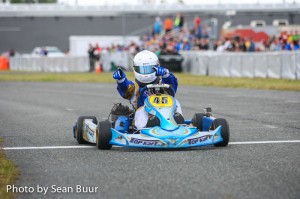 The four TaG Senior drivers would double up and see action in Parilla Senior along with longtime WKA front-runner Dakota Pesek. Boos would once again be the driver to beat in the field taking Sunday’s main event win and added a third place result on Monday. Calvin Stewart would remain consistent on the weekend with third (after starting 21st) and second place results while Chavez, in his first ever trip to Daytona, would finish sixth.

Veteran driver Steve Schiewer would continue where he left off from his 2013 season as one of the most consistent drivers on the weekend. Competing in the TaG Masters ranks, Schiewer would be at the front of the field all week long and take home hardware for his second and third place results.

Adam Sturgill would claim his first career WKA podium in the KPP Junior ranks with a solid second place finish in Sunday’s main event. Looking to garner the top spot on Monday, Sturgill would finish just outside the top-five in sixth. Alex Kardashian and Abby McLaughlin would also see action in the KPP Junior field with both of them finishing inside the top-ten. Kardashian would add a pair of third place results while McLaughlin would cross the line sixth and tenth on the weekend. 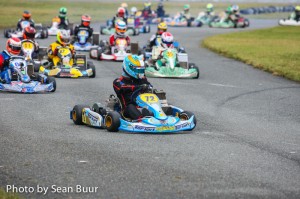 Four more podium results would come from drivers in the Yamaha Junior field with David Malukas, Emerson Reed and Zach Holden finishing second, third and fourth on Sunday. Monday would not go so well for the trio as Malukas failed to start the main event with Reed and Holden coming home fourth and eighth.

The Cadet Sportsman division would be the platform for a pair of Top Kart USA podiums, as Pauly Massimino and Lance Fenderson would stand on the podium. Massimino would drive from last to third in Saturday’s main event after gambling on a drying track and going out with slick tires. As many in the field would get slower with their rain tires overheating, Massimino would continue his upward trend and drive into a podium result. On day two of competition Lance Fenderson would be another Top Kart USA driver on the podium in fourth. Fenderson would also see action in the Yamaha Sportsman field as well adding fifth and seventh place results.

With the 2014 season now underway, Top Kart USA will now make the trek to the Homestead Karting Complex for the opening rounds of the Florida Winter Tour. Taking place on the grounds of the Homestead-Miami Speedway, Top Kart USA will be offering complete arrive and drive programs for the entire FWT with chassis, engine and trackside support available. Top Kart USA along with Victory Kart will also have multiple LO206 packages available for rent as they look to help North American karters compete in the international series in a cost effective program.