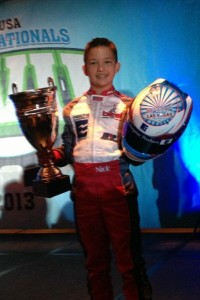 There is no better way to end a racing season, then finishing the year on the podium. That was the feeling TaG Cadet driver Nicholas Brueckner and his family shared as Nick’s name was called to stand on the podium Sunday evening after the 17th annual Superkarts! USA SuperNationals at the Rio All Suites Hotel and Casino. Brueckner, a 12 year old kart racer out of Hockley, Texas, ran to a third place finish at this year’s SKUSA Pro Tour finale, which was a vast improvement from Nick’s 2012 version of karting’s biggest race.

The SuperNationals was the exclamation point to a great 2013 for Brueckner that saw him contend and fight for national wins and championships all year. Racing out of the 3G Kart Racing tent for this year’s SuperNats, Nick and tuner Tim Lobaugh battled incredibly adverse weather conditions as well as some of the toughest competition from around the world. Nick spent time as the leader of the massive Cadet field, en route to a podium finish.

“The weekend didn’t start off too great. The weather was not cooperating and I had a bit of bad luck in qualifying,” commented the 2013 Florida Winter Tour Mini Max champion on his SuperNationals weekend after returning home to Texas. “But I was confident in my Birel chassis, my CMW engine, and my tuner, Tim Lobaugh. With a good start I got up front and had an amazing race.”

TaG Cadet drivers took to the track Friday late afternoon for qualifying while the lights began to shine brighter in downtown Las Vegas. Brueckner battled the increasingly wet conditions and low temperatures in search of speed in qualifying. As the session got underway Nick suffered a mechanical issue on the grid that left him with just one lap in qualifying. His out lap was good enough for 29th overall, set to starting 15th in all three of his heat races. Nick worked quickly at the start of his opening heat race, climbing nine spots on the opening lap. He would battle his way to the seventh spot at the checkered flag to close out the action Friday.

Saturday afternoon, the second heat race was more of the same as Brueckner had a terrific opening lap that saw him advance 11 spots to go from fifteenth to fourth by lap two. Brueckner would race hard with the rest of the top five for the remainder of the heat before finishing in the fourth position. The third and final heat race saw Brueckner bring home his third top-10 in a row, thanks to a ninth spot result to earn an 11th place grid position for the main event.

Nick and 42 of his fellow TaG Cadet racers took to the track late in the afternoon on SuperSunday under clear skies and dry circuit. Starting 11th, Nick ran in the top-10 during the opening laps of the race. Lap five would see a red flag put a momentary pause on Brueckner’s charge up the leaderboard. When racing resumed, Brueckner made his presence known quickly. Nick occupied the top five after the restart and quickly moved to second place by lap seven. For the remainder of the 15 lap main event, Brueckner battled for the lead with the world’s best Cadet racers. After leading the field as well as putting up a valiant fight the entire race, Brueckner would come home with a hard fought and well earned third place finish.

After finishing 2013 on a terrific note, Nick now turns his focus on preparing for the 2014 season as he will make the transition to the Junior ranks in both TaG and Rotax racing. Brueckner plans to hit marquee events of 2014, including the Florida Winter Tour and the Challenge of the Americas. Nick will also keep his calendar full with SKUSA racing as he will attend races with the Texas ProKart Challenge, the Rocky Mountain ProKart Challenge and the SKUSA Pro Tour. The U.S. Rotax Grand Nationals and the Rotax Pan American Challenge will also see Brueckner return, in hopes of adding more prestigious wins to his resume.

About Nicholas Brueckner:
Racing out of Hockley, Texas, Nicholas Brueckner is a name you will be hearing more throughout the karting ranks in the coming years. At 12 years old, Nick has spent less than four years in the sport, and has racked up impressive results and experience. From winning the Micro Max class at the 2012 U.S Rotax Grand Nationals and Mini Max championship in the 2013 Florida Winter Tour – to racking up wins at home in the SKUSA Texas ProKart Challenge, Brueckner is climbing the ladder quickly. Nick’s talents are far from being limited to just behind the wheel, however, as he is excelling academically, earning straight-A along with showing great leadership and people skills. Supporting Nick in his racing endeavors is the MRP Motorsport/Birel America team, Jose Castro/CMW Engines, Oakley Sunglasses and Savage Design.