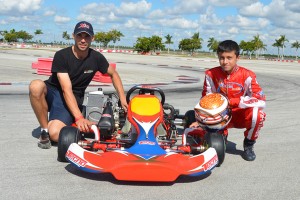 Looking forward to the 2014 karting season, the junior divisions of the sport will see the participation of the always fast and talented Michael Benyahia. After a successful 2013 campaign in the Rotax Mini Max ranks, the Tecno Kart pilot is set to contest in the TaG Junior, Rotax Junior and Junior Shifter classes before traveling to Europe to compete in several high profile series later in the season.

Closing his Mini Max career on a high note, Benyahia was often seen at the front of the field. Competing in the Florida Winter Tour, Benyahia closed the series with a strong second place result in the series point standings before coming home third at the United States Rotax Max Challenge Grand Nationals in Mooresville, North Carolina. Traveling to the beautiful NOLA Karting facility near New Orleans, Louisiana for the Rotax Pan American Championships, the up-and-coming driver would score an impressive fifth place result. Benyahia capped off his 2013 season with an invitation to the Rotax Micro & Mini Invitational that took place during the annual Rotax Max Challenge Grand Finals.

“2013 was a great season but I am ready to compete in juniors,” expressed the Rotax Mini Max South Florida RMAX Challenge Champion and TaG Junior Fall champion. “It will be a steep learning curve but I am up for the challenge. I have a great team and support around me and they will help push me to succeed.”

Starting the 2014 season at the annual Formula Kart Productions Florida Winter Tour where he will compete with the Tecno Kart Racing Team, Benyahia will see action in three divisions. During the Formula Kart weekends, the Doral, Florida resident will compete in TaG Junior and will also try his hand in the six-speed gearbox division of Junior Shifter. The Rotax weekends will see him condense his program down to one class, as he will shift his focus to running up front in the always-competitive Rotax Junior field. Following the FWT, Benyahia will travel to Europe to continue training and to gain experience to make him a better driver, racer and competitor as the season continues on. 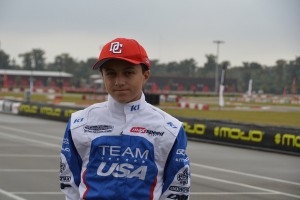 Benyahia has a successful year in Rotax Mini Max capping it off with an invite to the Rotax Micro & Mini Invitational in New Orleans
(Photo: Michael Benyahia Racing)

“It is very important for Michael to gain some experience while competing in Europe,” explained Tecno Kart Racing Team Manager Michele Zampieri. “The conditions in Europe are very different than in America and the competition and driving style is much more intense. These factors can only benefit Michael in his future racing career.”

Benyahia continued, “I am very excited to join the Zagar Corse Team overseas. The team provides high quality performance karts and engines. The team is very successful because of their professionalism and their passion for the sport. They are always looking to improve their drivers and equipment and have even given me a fitness program designed by them. I can’t wait for the 2014 season to start.”

Big thanks to the sponsors: Zagar Corse, CCM Mobile, Digitunes and MediaMartOnline.com.

For more information on Michael Benyahia including news, profile, media and contact information, please visit him online at www.michaelbenyahia.com.