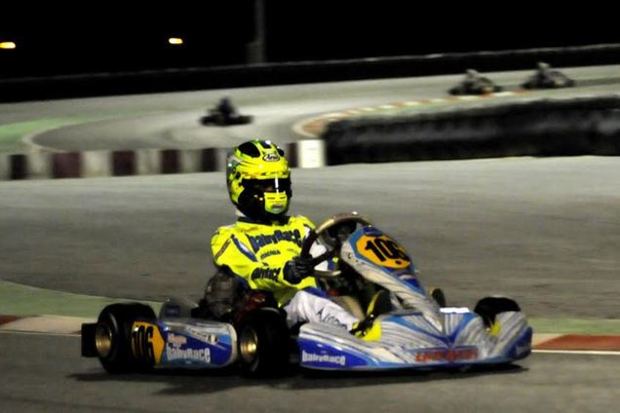 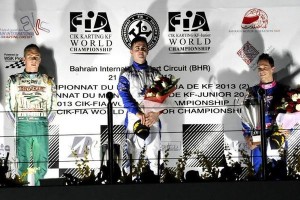 The winner of the KF final, Tom Joyner (GB), celebrates on the podium of Sakhir, in Bahrain. On his right is the runner-up Karol Basz (PL) and on the other side is Armand Convers (F), third
(press.net Images)

The results of the final round of the World CIK-FIA Championships for the KF and KFJ categories were absolutely unexpected. The race that awarded the world titles was hosted by the Bahrain International Karting Circuit: in KF the new World Champion is the English Tom Joyner (Zanardi-TM-Vega), while the Italian Alessio Lorandi (Tony Kart-Parilla-LeCont) won the CIK-FIA KF Junior title. The circuit of Sakhir was the venue of the top event of the season, in the presence of the Crown Prince of Barhain, Salman bin Hamad Al Khalifa, and of the CIK-FIA President, Sheikh Abdulla bin isa Al Khalifa.

The leader of the Championship, the Dutch Max Verstappen (CRG-TM-Vega), was able to enjoy the virtual victory of the title only for few laps. He led the race for a very short time, preceding a pack of hard-fighting opponents. Then, he and the Danish Nicklas Nielsen (Kosmic-Vortex-Vega), his most dangerous rival, crashed into each other and they both lost the hope of winning the title. The way was open for Joyner, who took the lead ahead of the Polish Karol Basz (Tony Kart-Vortex-Vega) and the French Armand Convers (Kosmic-Vortex-Vega). He kept the lead until the checkered flag, unexpectedly winning the Championship from the 12th position of the standings, position he occupied after a disappointing first round in Brandon (GB).

The thrilling battle between six drivers was eventually won by the English Lando Norris (FA Kart-Vortex-LeCont), who finally got a satisfactory result after his poor performance in Sarno (ITA) in the first round of the KFJ championship. Lorandi, who aimed at the victory in the Championship, managed to lead for a short time during the eventful final phase of today’s race. The pack behind him managed to close the gap and then Lorandi saw Norris becoming the leader. The Italian driver did not succeed in his desperate attempt to pass the Russian Nikita Mazepin (Tony Kart-Vortex-LeCont). Lorandi finished third and was able to celebrate his victory of the Championship only after the stewards’ decision that punished Mazepin for trespassing the track limit. So, Lorandi became the runner-up and finally scored more points than his fellow countryman Leonardo Pulcini (Tony Kart-Vortex-LeCont), who had arrived in Sakhir as the leader of the Championship. Pulcini, despite his fourth place behind the Russian Robert Shwartzman (Tony Kart-TM-LeCont), was obliged to leave the title to his opponent.

The racing weekend in Sakhir on Rai Sport 2

The CIK-FIA World Championship of Sakhir will broadcast the two Finals delayed on Tuesday 26th by Rai Sport 2. The Rai’s sport network will complete the TV coverage with the after-event special report, scheduled on Friday 29th November.