Boccolacci, Ahmed and Norris are the polesitters in the prefinals 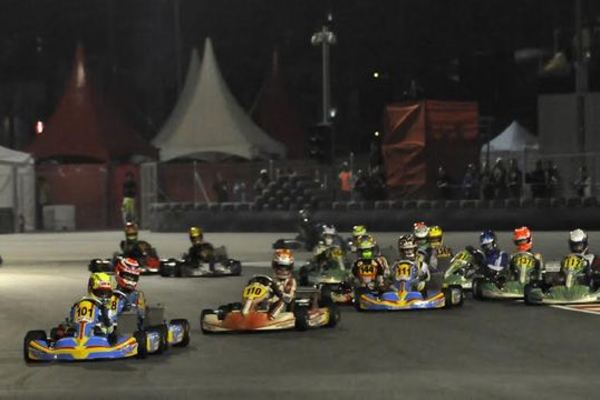 Racing under the lights of the Sakhir circuit in Bahrain complimented terrific racing
(press.net Images) 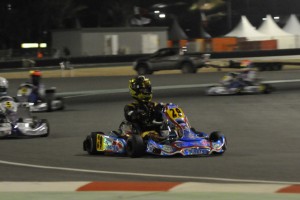 Dorian Boccolacci (29 – Energy-TM) will start tomorrow in pole position, in the prefinal KF of the CIK-FIA World Championship in Sakhir, Bahrain
(press.net Images)

The long series of qualifying heats in the night of Sakhir has ended. The finals are approaching fast and with them the end of the Championships which will award the KF and KFJ titles tomorrow. The World CIK-FIA Championship for KF and KFJ, the final act of the international 2013 kart racing season, has found its ideal setting here, on the Bahrain International Karting Circuit. The races run at night gave the whole event a fascinating scenario and made the wheel-to-wheel races even more enjoyable. The session of qualifying races ended in the late evening and we now know the names of the drivers who are going to start from the pole positions in the prefinals. None of the protagonists had an easy time: the competitors are all well motivated and ready to fight on the racetrack. The KFJ is an outstanding example: the 10 heats run today had seven different winners.

BOCCOLACCI KEEPS THE POLE IN KF

The Dutch Max Verstappen (CRG-TM-Vega) is the driver who achieved most victories: he won two of the three heats raced in KF. The French Dorian Boccolacci (Energy-TM-Vega), on the other hand, won only once. After winning a race each, Verstappen, who had been trailing in Boccolacci’s wake waiting for the right moment, managed to overtake the French during the last lap of the decisive heat. A great performance for the Dutchman, but which did not allow him to be the pole sitter, given that the overall results of Boccolacci were better. So, the French is finally the pole sitter, thanks to a victory and two second places. Verstappen is second because of the fifth place scored in the first heat. However, Boccolacci’s race to the title seems rather hard: the French is 18 points behind the leader, Verstappen, who, in the prefinal, will start from the second slot. Another driver who got good results in the heats is the Finnish Ville Mantyla (Kosmic-Vortex-Vega), who was consistent behind the two leaders and scored an excellent third position on the grid. Next to him, in the fourth slot, the English Tom Joyner (Zanardi-TM-Vega). Nicklas Nielsen (Kosmic-Vortex-Vega) is only 5 points in the standings behind Verstappen but he will start only in fourth row: he. The Danish battled with the top drivers in the first two heats, but was involved in a crash at the start in the third, which prevented him from racing for the first positions.

AHMED AND NORRIS AHEAD IN KF JUNIOR

LIVE ON VIDEO FROM SAKHIR

All the images of the round will be available live in streaming on www.cikfia.tv and www.cikfiachampionship.com on Saturday 23rd. On Rai Sport 2, on Tuesday 26th, the delayed broadcast of the finals and, on Friday 29th, the after-race special report from Sakhir.