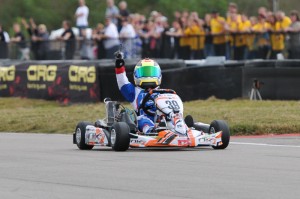 GT7 Motorsports pilot Dylan Tavella continues to roll through the 2013 kart season, adding major race wins and accomplishments along the way. Most recently, the New York resident added the Rotax Micro & Mini Invitational championship title to his already impressive resume, and the young talent now has his sights set on the SuperKarts! USA (SKUSA) SuperNationals this coming weekend in Las Vegas, Nevada.

Traveling south to the NOLAMotorsportsPark, sight of his Pan American Championship victory only a month ago, Tavella along with thirty-five other qualified drivers from across Canada, United States and Mexico would compete in equally prepared Rotax powered OK1 karts at the invitational event, part of the Rotax Max Challenge Grand Finals (RMCGF). With a pair of practice sessions to get up to speed before the timed qualifying run, Tavella was quick early and often near the top of the time sheets.

Taking to the track on the world stage during the RMCGF, which featured 360 drivers from over 50 countries and is referred to as the ‘Olympics of Karting’, Tavella flexed his muscles early as he managed to score the pole position in Friday afternoon’s qualifying session. Taking the point by a scant .009 seconds, Tavella would line up on the inside of the front row for Saturday morning’s prefinal.

After going only tenth quicker in Saturday’s morning warm-up, Tavella would experience his first wheel-to-wheel action of the weekend when the green flag dropped for the prefinal. Battling race winners and champions from across North America, the field was close and racing was fierce. Falling back early and working his way back forward as the race went on, the 2013 US Rotax Micro Max Grand National Champion would have one of the quickest karts on the circuit but would end his prefinal run in fifth and start the main event from inside row three.

In what could be classified as one of the most exciting main events of the weekend, the Rotax Micro Max competitors put on a show to remember in front of packed grandstands that lined the circuit. Progressing through the race, it looked as if two karts would battle for the win but three others around mid-race and three more in the final few circuits quickly joined them. With eight karts in the lead group and all battling for the top spot, Tavella would make a last lap charge down the inside of the main straight away to take the point. With karts two and three wide looking for a way around, Tavella defended his line into the final corner and emerged the victor as he pumped his fist crossing the finish line for yet another victory in 2013. Crowned the Rotax Micro Max Invitational Champion, Tavella took very little time to celebrate as he jet set his way across the country to his next event.

“We can’t thank everyone from Rotax, GoRotax and the NOLAMotorsportsPark enough for putting on such an amazing event,” expressed Phil Tavella from Las Vegas. “We are so appreciative of everyone’s efforts – Richard, Josh, the whole crew – they are such a class act! The atmosphere was just phenomenal. Hearing the American National Anthem play, having the grandstands packed, just having the event on American soil made Dylan’s win even more special. And the competition was intense! Taking on the best Micro Max drivers from North America was an experience we will never forget! Thank you again to everyone!”

Already arriving in Las Vegas for the annual SuperKarts! USA (SKUSA) SuperNationals, Tavella will see action in the TaG Cadet division against a strong field of eighty drivers this week at the annual event. Looking to carry his momentum, Tavella will hit the track this afternoon for the first of eight practice sessions on the temporary circuit adjacent to the Rio All-Suites Hotel and Casino. Thursday will see the young gun back on track for more practice sessions, with Friday featuring the all-important qualifying sessions and the first of three heat races. On Saturday Tavella will take in the final two heat races before gunning for the SuperNats TaG Cadet title on Super Sunday. Be sure to tune into eKartingNews.com’s live coverage of the event at http://www.ekartingnews.com/live/ to follow Dylan’s progress at the 17th running of the prestigious event.

Dylan Tavella would like to extend a special thank you his tuners Charlie Swayne and Phil Pignataro, GT7 Motorsports, and again everyone at the MaxSpeed Group, Rotax and the NOLAMotorsportsPark for putting on such an amazing event.