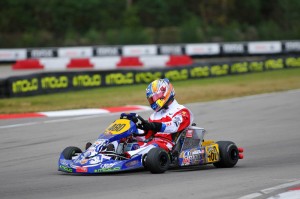 Rudolph claimed the pole position and all three heat race wins only to be denied the world title in the final
(Photo credit: Ken Johnson – Studio52.us)

Earning his Rotax Max Challenge Grand Finals (RMCGF) ticket through the Challenge of the Americas, veteran karter Alan Rudolph looked to have a world title in his grasps. Competing in the Rotax DD2 Masters category against 72 other competitors in equally prepared equipment, Rudolph was the driver to beat throughout the week before a heartbreaking incident in the main event.

“It has been a hard week for me,” explained Rudolph. “I felt like we had the victory in the bag but an issue in the final took me out of contention. I worked really hard to ensure success for this event and it hurts knowing that I will not have another chance until next year.”

Flexing his muscles during the official timed sessions, Rudolph went on to take the pole position and all three heat race victories leading into championship Saturday, showing his strength in both wet and dry weather competition. With the world watching and a title at his fingertips, the PSL Atlantic pilot was taken out on lap three in the main event. Falling all the back to 30 th, Rudolph would put his head down and have a stellar drive back to 12th being the top finishing American in his class.

Rudolph continued, “It was the best and worst week in my racing career. I have never been so focused on winning as I was in New Orleans. I wanted to become a Grand Finals champion and help put the DD2 Masters class on the map in the USA. I would like to congratulate Team USA on winning the Nations Cup and my teammates on a very successful event, especially Juan Manuel Correa for his outstanding victory in Rotax Junior and Oliver Askew in a stellar drive from 30th to a podium result, and Joey Wimsett on his second place finish in DD2.”

“I also would like to extend a special thank you to PSL Atlantic, Mike Dobbelsteyn, BondurantSchool, K1 Racegear and Jesse Dunham. I would also like to thank my friends and family for the support throughout my 2013 racing season.”