Eye on the prize for over 80 drivers in headline category

The pinnacle of single-speed karting in North America is the TaG Senior category.  And there is no bigger stage than at the SuperNationals, where over 80 drivers will compete for a starting spot on SuperSunday, and a chance at the most coveted victories in karting today. A mixture of veterans and young aspiring drivers will face off against super stars in the motorsports world, as they collide over the next five days, all looking to add their name to Superkarts! USA history. Over the last 10 years in TaG Senior, it’s been a diverse list of winner – feature four Americans, two Canadians, one Italian, one Brazilian and, most recently, one Columbian. 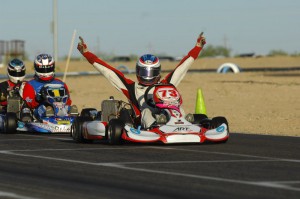 The TaG Senior championship is for Andrew Zimmer to win or lose (Photo:

Last year’s event was as dramatic as the first TaG Senior race in 2003 at the SuperNationals. Indy Lights driver Gabby Chaves came through the field to score the victory and the Columbian/American is set to defend his crown this year. Louie Pagano – the eKartingNews.com Driver Rankings number one driver – finished second and is set on more than just victory in Vegas. Kiel Spaulding and Frenchmen Charles Leclerc were third and fourth, but neither are returning, while Canadian Remo Ruscitti will carry the #2 plate he earned in the SKUSA Pro Tour last year.

All three SKUSA plates are up for grabs once again, with new contenders in the mix to claim #1, #2, and #3. Factoring in the drop race, double SpringNats winner Andrew Zimmer (ART GP) enters with a 110-point advantage over Pagano, who has actually recorded the most points over the course of the four rounds contest. Taking away each driver’s worse round point total, Zimmer leads the new Dallas Karting Complex/Sodi Kart USA driver. Each have raced in limited events in 2013, and are still among the top drivers in contention.

Still in the hunt as well is Senior rookie Jonathan May (FA Kart), as the young Californian put in a superb SpringNationals including two top-five finishes. Still mathematically in the hunt is his teammate and Vegas native Matt Johnson (Tony Kart). One victory eludes the shifty veteran, and Johnson is no stranger to the podium at the SuperNationals. 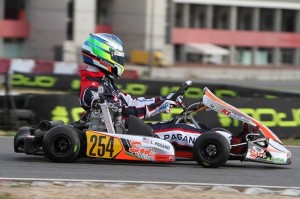 Pagano is hoping for the same results as last year, except in his new Sodi ride (Photo: Ken Johnson – Studio52.us)

Podium Predictions: The odds makers in Vegas really have their work cut out for them in this one. With over 80 drivers, selecting the correct five to make it to the front on SuperSunday could make you a lucky gambler. To begin, it’s a look at the numbers and one of the most successful brands at the SuperNationals of the past few years – the Italkart. Last year, we saw nearly all the Italian Motors USA drivers at the front throughout the week, including defending champion Andre Nicastro. The 2010 SuperNats winner scored both wins at the SummerNationals in Colorado, and should he keep his composure and stay toward the front of the field, there may be no stopping him. He and Ruscitti will be tough to keep off the podium this year as well. Pagano has also racked up the frequent flyer miles at the SuperNationals podium, but has just never reached the ‘first class’ section. To do so, while earning his first Pro Tour championship, with his new team, would be a storybook ending to 2013. Zimmer has shown he’s capable of performing well on the big stage, although this time it’s the grandest stage of them all. The Washington driver seems to handle pressure well, and if a championship is what he wants, a podium finish will be what he needs. The silent fifth member of this party may be Florida driver Dalton Sargeant. The 2013 Tony Kart factory driver was fast all season in the KF category, and it should translate nicely into his TaG Senior debut at the SuperNats after finishing fourth in TaG Junior a year ago. 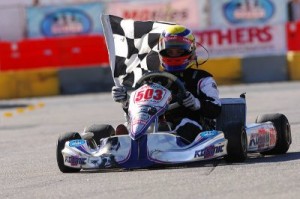 A victory last year for Gabby Chaves puts him right back on the contenders list for this year (Photo: On Track Promotions – otp.ca)

Wildcards: If you look at the entry list, you will see a number of drivers who certainly have the ability and equipment to reach the podium, or even the checkered flag first. It could be a battle of the East versus the West with a number of talented pilots coming from across the Mississippi for SuperNats glory. Kyle Kalish (Merlin) is among the young rising talents, coming off a USPKS championship against stout competition. The Franklin Motorsports driver is making his first SuperNats start, so getting over the glitz and glamour of Vegas will be his first hurdle. Eleven of the drivers in the field are under the Top Kart USA tent – including the Johnston brothers, Garrett and Jake. Along with Texan Mason Chelootz, Bill McLaughlin Jr. and many others, it could be a #rollblue toward the front. Florida driver Dustin Stross (Ocala Gran Prix/Tony Kart) and SummerNats runner-up TJ Koyen (DB Motorsports/Exprit) are also ones to watch for.

From the west, Austin Elliott represents the Top Kart brand, and has been solid in Superkarts! USA competition all year. ART GP driver Chris Cricca is coming off a big win at the Streets of Lancaster Grand Prix, which should translate nicely around the confines of the temp circuit at the Rio. Teammate Jake Craig is the 2013 California ProKart Challenge champion, and is looking to bounce back after a tough outing at the Rotax Grand Finals last week. A total of six Canadians will be in the field, with Alberta’s Parker Thompson (Energy) making his TaG Senior debut. The former Junior standout is set to tackle the Senior division, following a successful season racing in Europe in the KF Junior category. Former Junior winners looking to earn a second SuperNats win include Joao Vieira (OTK USA/Tony Kart) and Felipe Fraga (CRG-USA).

Karting Cameo: This year’s SuperNationals will be a reunion of sorts as former SKUSA ProMoto Tour rivals and friends are set for a return to their roots. Three-time SuperNationals winner and current Global Rallycross Series driver Scott Speed will race alongside fellow NorCal and NASCAR driver AJ Allmendinger. It’s been 12 years since Speed won the SuperPro category at the X-Plex facility just down the road from the Strip, and it has been a whirlwind adventure for the Manteca, California native. Back to race his first SuperNats in over a decade, Speed will pilot an Energy chassis in Vegas. ‘Dinger’ has led a double life – racing in NASCAR and spending a lot of time at the karting track. During his off-time, he’s either at a kart race or getting seat time at the GoPro Motorplex. Working with KartSport North America, he will pilot an FA Kart outside the Rio this week.