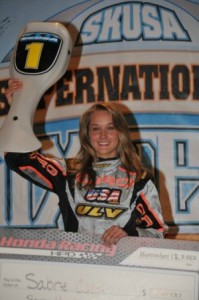 Sabré Cook is ready to add to her impressive young resume during the 17th edition of the Superkarts! USA SuperNationals in Las Vegas
(Photo: On Track Promotions – otp.ca)

Rising karting star Sabré Cook returns to action this coming week (November 20-24) when the 17th edition of the world renowned Superkarts! USA SuperNationals take place at the Rio All-Suite Las Vegas Hotel & Casino in Las Vegas, Nev. For the Colorado racer, it is another opportunity to further showcase her talents at the premier event in the U.S.A calendar, having secured the SKUSA Pro Tour S2 Semi-Pro Stock Moto title last year with a runner-up finish at the SuperNationals. Now racing in the pro ranks via the S1 Pro Stock Moto class, she is focused on fighting for the win, and emerging as the 2013 class Rookie of the Year,

Since the season commenced back in mid-April via the Superkarts! USA SpringNationals in Tucson, Ariz., Cook has indicated she is more than ready to take on the challenges of the highly-competitive S1 class. Despite the 19 year-old being a class rookie, she wasted little time getting up to speed in her CRG-USA/DDR S1 Pro Stock Moto package, immediately battling more experienced racers for top honors.

Exiting the season-opener with a pair of trips to the post-race podium, the stage was set for the former TAG World champion to be among the title fight right until season-finale at SKUSA SuperNationals. While things didn’t go exactly as planned during the summer months, with surgery to remove a gallbladder, and less than desired results at the SKUSA SummerNationals on her home track in Colorado, Cook still has plenty of momentum to build on entering the SuperNationals.

Cook has the added bonus that she definitely knows the quick way around the temporary track situated within the Rio Hotel & Casino parking lot. She was one of the drivers to beat last year in Las Vegas, ultimately finishing a close second in the S2 class, which is the primary feeder class for S1. When combined with her raw talent behind the wheel, and the rapport she has developed with her skilled crew, Cook is more than capable of standing on the top step of the podium come the conclusion of ‘Super Sunday’, and exiting Las Vegas as the S1 Pro Stock Moto Rookie of the Year.

“It’s been a very challenging year with my health issues, but I’m almost 100% again,” stated Cook. “I’m training harder than ever, mentally and physically, to make up for lost time. They say what doesn’t kill you makes you stronger, and that’s what my year has been all about so far. I’ve come to realize that strength does not come from muscles, but from your soul and mind, so regardless of my physical condition, I plan on pushing hard and going for the win at the SuperNationals. It’s going to be one of the strongest group of competitors yet in S1, but I plan to fight every bit of the way to get where I want to be. I may have been down for awhile, but I plan to get up and come back stronger than ever.”

The on-track action at the 2013 Superkarts! USA SuperNationals commences for Cook on November 20, with the opening practice session. An additional practice run takes place one day later, prior to qualifying, and the first of three Heat races will be run on November 22. After two more Heat races on November 23, the final takes place on November 24, as part of Super Sunday. Cook enters the 17th edition of the world renowned event currently sixth in the SKUSA Pro Tour S1 Pro Stock Moto standings, second in the Rookie of the Year points. As always, Sabré Cook would like to thank CRG-USA, DDR Engines, K1 Race Gear, Gold’s Gym, Alpine Bank, Brett King Designs, Bell Helmets, MG Tires, Lyn St. James, and Unser Racing Simulators for their support of her racing program. Visit www.sabrecook.com for more information and be sure to follow her on Facebook.

Grand Junction, Colorado’s Sabre’ Cook is a rising female motorsports star. Completing her tenth year in karting, the 18-year old earned the Superkarts! USA S2 Semi-Pro Stock Moto championship in 2012. Growing up at the Grand Junction Motor Speedway, Cook has developed up the karting ranks and is nearing the top level. Over the course of her career, she has earned six Colorado State Championships, two TAG World Championships, a SKUSA Mountain Region title, represented USA at the Bruno Grana International Trophy event in France, and competed all across North America while maintaining a 4.1 GPA during her high school career. She enjoys basketball, golf, acting, singing, volunteering and is a member of the National Honors Society and the Future Business Leaders of America. Cook completed her goal for 2012 by earning the Superkarts! USA Pro Tour title and is among the top rookies in the S1 Pro Stock Moto category in 2013. Visit www.sabrecook.com to learn more about this promising driver.