2013 is Ryan Kinnear’s year to shine in Sin City

In many ways, racing is just as much about climbing the ladder as anything else. Once you get into one level of the sport, you’ll start looking at the next plateau. SKUSA has developed its own internal ladder system and the final step before reaching the top in the Stock Moto program is the highly competitive S2 Semi-Pro category. The S2 class is home to all those with the need to bang gears and who have the dreams of one day racing with the SKUSA elite.  Running in S2, dozens of S1 hopefuls will make the best case that they can to bring to SKUSA brass, proving that they belong in the Pro class for the following year. That said, only a select few will make the jump each year, and for 2014, the class is deep and large. 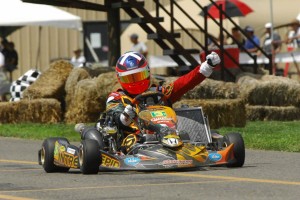 Ryan Kinnear is gunning for victory and championship in S2 this time in Vegas (Photo: On Track Promotions – otp.ca)

The S2 class made history at last year’s SuperNationals when it welcomed the first female Pro Tour champion in SKUSA competition. Colorado’s Sabre Cook led not only the opening laps of the S2 main event last year, but she left with a Pro Tour championship, the nod to go to S1, and seemingly hundreds of new fans. The driver who bested Cook on-track was Southern California’s Billy Musgrave. The two-wheel transplant was impressive throughout 2012 – especially in Las Vegas – and also earned his ticket to the S1 Pro class. Ryan Kinnear made noise last year after driving from middle of the pack to an impressive third place finish. Canadian Scott Hargrove ran near the front throughout the entire weekend before ultimately settling for a fourth place finish. Alec Gumpfer rounded out the S2 top-five when the checkers fell.

Of all the top-five finishers from last year’s S2 class, only one will be returning to the SuperNats as an S2 competitor, as the remainder of them made the jump to S1. Kinnear (Intrepid) enters the final round of the Pro Tour with a very slim point lead in the SKUSA Pro Tour over Christian Schureman (CRG), and will be looking to finish up his S2 career in style. Kinnear recently locked up his first regional title, as he reigned supreme over the S2 class in the Texas ProKart Challenge. Schureman narrowly missed out on standing on the podium both days at the SummerNationals where he posted back-to-back fourth place finishes. Coupled with a top-five in Tucson back in April, Schureman is more than capable of taking the championship from Kinnear in Vegas. Texan Garrett Boone (Birel) came out of the gate swinging at the SpringNationals. Boone drove to a second place finish at round one, and then scored the win in round two. Boone currently sits third in Pro Tour points and is hot on both Kinnear and Schureman’s heels. Sitting fourth and fifth in the S2 championship fight heading for Sin city are the Brothers Diede (CRG). Cody and Troy both had impressive weekends at the SummerNats, which saw Cody victorious on Saturday, while Troy ran second both days. Augie Lerch (Tony Kart) sits sixth in the points tally thanks to a clean sweep of the first round of the Pro Tour in his home state of Arizona.

Podium Predictions: Seeing as how the theme of the host city is focused on gambling, one would be hard pressed to find a “sure bet” to stand on top of this year’s S2 podium. Texas ProKart Challenge champion and current point leader Ryan Kinnear has proved how fast he can get around the parking lot of the Rio All Suite Hotel & Casino. Kinnear drove from 15th to the top-five by lap six en route to his third place finish. Schureman will not be beat out this year for lack of testing prior to the fall classic. Schureman has joined up with his CRG-USA teammates at several club races on the other side of the state in Colorado, as well as heading anywhere and everywhere to race. Schureman has prepared tirelessly for the biggest race of his young career. Boone is more than a threat after showing his speed early in Arizona, and the Texan is poised to make a run for the podium. Fellow Texan and current California ProKart Challenge S2 champion Connor Wagner (FA Kart) is another potential threat to the top-five. Augie Lerch is a driver to keep an eye on no matter the series or track the race is taking place at.

Wildcards:  The only thing certain in the S2 class is that the race will be action packed. Other than that, all bets are off the table. Texas ProKart Challenge fourth place finisher Luke Shanahan will look to shake things up in Vegas. Shanahan drove to a season high second place finish at round five of the TPKC.  A number of drivers will make their SuperNationals debut this year as well, having just jumped into the shifter kart arena.  Tony Kart pilots AJ Myers and Oliver Askew run with Ocala Grand Prix, and the Florida track team has embraced recently the Stock Moto program and is putting their top drivers on gearbox.  This could blow things wide open. Meyers made noise over the summer in Rotax events as an independent driver, and has taken well to his S2 kart. Askew is another Rotax racer making his S2 debut in Vegas next week. Askew will contest the SuperNationals just days after competing as part of Team USA in the first ever U.S hosted Rotax Grand Finals. Don Whittington (Tony Kart) and Josh DeLosier (Kosmic) will also be on hand to keep everyone honest, as they look to crack the top-10.