The CRG product is among the best and most historic brands in the sport of karting. CRG-USA is now making their third trip to the Superkarts! USA SuperNationals as the western Colorado-based operation is set to field its largest contingent at the 17th annual event outside the Rio All-Suites Hotel and Casino in Las Vegas. The United States CRG importer will bring together a mix of Americans along with a stellar international roster that include former world champions at the CIK-FIA and Rotax Grand Finals – in addition to one of the strongest S1 and S2 rosters in the paddock. The ultimate goal is victories and podiums for the team, in addition to a few SKUSA Pro Tour championships on the line.

“We are very excited about our driver lineup this year,” CRG-USA owner Stacey Cook said during final preparations at their Grand Junction Motor Speedway base. “We feel we have one of the strongest teams on the Pro Tour and have several drivers in each class that are capable of getting on the podium.” The entire CRG-USA team will be offering its usual high level of hospitality and trackside accommodations in Las Vegas, “As always the CRG-USA tent is open to anyone, so please stop by and enjoy our hospitality area for a drink or snack”. 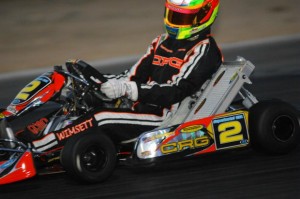 Joey Wimsett will lead a talented group of S1 drivers under the CRG-USA tent
(Photo: On Track Promotions – otp.ca)

In the S1 Pro Stock Moto category, CRG-USA will field four very talented drivers in this years SuperNationals. Joey Wimsett returns to the SuperNationals with CRG-USA for a second year, racing with the team in 2012 with a very solid fourth place finish. Wimsett will be coming in to the SuperNationals after competing in the Rotax Max Challenge Grand Finals at NOLA Motorsports Park in New Orleans, Louisiana. Wimsett, who qualified for the first ever United States-hosted Rotax Grand Finals through his home series of the Can-Am Rotax Max Challenge, will race under the CRG-USA banner at NOLA the week of November 10-16, before turning around and heading west for Las Vegas. Hailing from the team’s hometown of Grand Junction, Sabre Cook returns to Vegas one year after her best finish of the event in her career. Cook was crowned the S2 Semi-Pro Stock Moto Pro Tour champion at last year’s SuperNats after a runner-up finish on SuperSunday. Cook – who is currently attending the Colorado School of Mines for a degree in mechanical engineering hopes to be 100% after struggling with a mystery virus this summer.

Jimmy McNeil comes into the final round of the 2013 SKUSA Pro Tour in Las Vegas sitting fifth in the S1 point standings. A two-time winner at the SuperNationals in S4 (2010) and G1 (2011), the elder driver of the S1 roster is looking for his best finish against the best in shifterkart racing. Hometown hot shoe, Matt Jaskol will race with CRG-USA for the second year in S1. Jaskol, an accomplished and decorated name in motorsports has raced karts since the beginning of his career dating back to 1995. Jaskol has competed at many levels of American motorsports and is an annual contender for the podium at the SuperNats. The newest addition to the CRG-USA roster is the ‘Flyin Hawaiian’ Alec Gumpfer. A busy SuperNationals it will be for the new CRG pilot as he plans to compete in both the S1 and KZ2 categories, making his first ever start in the international division. 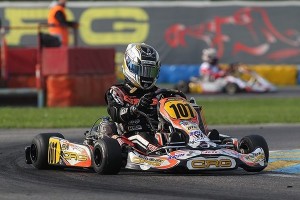 Joining Gumpfer in the KZ2 class will be a pair of very well know, and very talented international pilots. Going from a consulting role as a driver coach in the CRG-USA tent last year, former world champion Davide Foré will climb behind the wheel and run through the parking lot of the Rio with some of the best kart racers in the world. Stacey Cook noted how much the team benefited from Fore’s expertise and mentoring ability in 2012, and how the whole squad is excited to have Fore join them on the track this year. Canadian standout Philip Orcic will join the team for the first time this November. Orcic has competed all over the world, including CIK-FIA and the WSK Euro Series. In 2011 Orcic stood atop the TaG Senior podium at the SuperNationals.

2013 has already been an awesome year when it comes to CRG-USA’s young and talented S2 Semi-Pro Stock Moto core of drivers. Six talented drivers from two states will contest the S2 class this year in Vegas on behalf of CRG-USA. Leading the charge of the Semi-Pro drivers for CRG-USA will be Rocky Mountain ProKart Challenge racer Christian Schureman. After making the switch to CRG-USA last year, Schureman has showed speed and skill aboard his new ride as he currently sits second in the S2 Pro Tour championship picture heading in to Vegas. Schureman will also take on the daunting task of pulling double duty at SuperNationals as he will compete in the KZ2 category alongside Foré and Gumpfer. 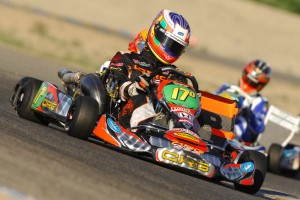 CRG-USA S2 driver Christian Schureman is heading to Vegas with a championship in sight
(Photo: On Track Promotions – otp.ca)

The S4 Masters Stock Moto class has been some of the most exciting racing on the Pro Tour in 2013, and CRG-USA drivers have been right in the middle of it all. Robert Marks of California will spearhead CRG-USA’s charge in the S4 class. Marks enjoyed a very good weekend at the SummerNationals in July that saw him never leave the top-five during on track action over the two days of racing. Coupled with a podium at round one in Tucson, Marks enters the final round of the Pro Tour fourth in S4 points and returns to Vegas after a top-10 finish last year.

Felipe Fraga will reunite with CRG-USA after racing under their tent back in the spring of 2011. Fraga is an accomplished kart racer, having won numerous karting championships in his home country of Brazil, and has claimed victory in the United States time and time again including a SuperNationals victory in 2008. Fraga has spent the last year working with the Red Bull Racing Junior team as he continues to pursue a career in formula car racing. Fraga will contest the ultra competitive TaG Senior class in Vegas.

Of the 11 classes offered at this years SuperNationals, CRG-USA will support drivers in all but three. Another new addition to the CRG-USA roster racing in DD2 Masters will be Canadian Scott Campbell. The 2010 Rotax Max Challenge Grand Finals champion is currently competing at this year’s event in NOLA, along with S1 driver Joey Wimsett – will contest the 17th running of the SuperNationals only days after competing in New Orleans at the Rotax Grand Nationals.

For more information on being part of the CRG-USA operation for Las Vegas or to discuss plans for the 2014 season, visit www.crg-usa.com