The 2013 season is finishing up, and the Aluminos program is rolling strong. Recently, the Northern California operation finished up the 2013 Red Line Oil Karting Championship at the Simraceway in Sonoma, California (November 2-3). Aluminos contested the full season, earning victories each and every round, ending with another victory with veteran Brett Buckwalter. And looking ahead to next week, the race team and chassis brand will field 24 drivers for the Superkarts! USA SuperNationals XVII.

Aluminos owner Rob Soares and his team made some noise in the final round of the RLOKC season, and no where else was that more evident than in the Pro Stock Honda class. A quartet of talent drivers carried the banner for Aluminos that included Tom Dyer, Jason Toft, Brett Buckwalter and Will Preston. Dyer, with Toft and Buckwalter swept the top three positions in qualifying, all aboard the Aluminos chassis. Finishing second in the prefinal, Buckwalter bought his time in the main event, taking the lead on the final lap to score Aluminos chassis its second straight victory in the series. Toft came from the back after engine trouble in the prefinal, driving his way to third. Preston ran as high as third in the feature, ending up with a solid fourth while Dyer overcame a poor start to place fifth – putting all four Aluminos drivers in the top-five.

Billy Scott had a solid final weekend in the Red Line Oil Karting Championship which started off with him slotting his Aluminos machine third in the Rotax Masters qualifying. Scott fell at the start to as low as fifth but spent the next six laps climbing back to his starting spot of third place, where he would finish. Scott came back in the main with a great start that vaulted him to second on the opening lap. He would spend the next 14 laps of the 15 lap main event shadowing the race leader and ultimately finishing in the runner-up position.

Carlos Calderon competed in the Rotax Senior class for Aluminos at Sonoma. After only missing out on the pole position, Calderon started the prefinal in third place. The series front-runner fell to fourth on the start of the heat race, but managed to climb back to finish in third, setting him up well for the main event. Calderon was running third the first nine laps of the race before he lost the chain and was forced to retire from the race. He did however gain valuable data points on the new Aluminos chassis moving forward for the 2014 season.

Team Aluminos fielded two drivers in the Micro Max class – Ethan Tavares and Grant Langon. The two stuck close together the entire day starting in qualifying with Tavares running the fourth quickest lap of the session with Langon right behind in fifth place. The heat race was uneventful for both Aluminos drivers as Tavares held station the entire race in fourth while Langon rode in fifth. In the main event, Tavares had an up and down race, running as high as third and as low as seventh, before crossing the line sixth. Langon got a great start that saw him occupy third place before relinquishing the spot to Tavares. Unfortunately Langon’s race would end three laps early with a mechanical issue. 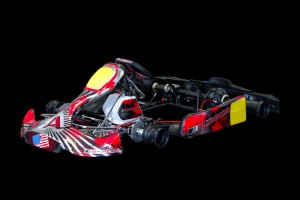 The New Aluminos chassis earned a second victory at the Red Line Oil Karting championship finale, and is primed for its debut at the SKUSA SuperNationals XVII

With the preparation finalizing, the Aluminos operation is gearing up for 24 drivers to compete at the Superkarts! USA SuperNationals XVII in Las Vegas. Outside the Rio All-Suites Hotel and Casino, a collection of USA and international stars will form the Aluminos roster. It will also mark the debut of the Aluminos chassis at the prestigious event, which won at its SKUSA Pro Tour debut in July with Kiwi driver Daniel Bray behind the wheel. Aluminos continues to support CRG and GP Kart drivers under their growing race team.

All S1 drivers will pilot the new Aluminos chassis, with Dyer and Langon former winners of the event, while Bray, Buckwalter and Toft have all tasted the podium champagne. The S2 contingent is made up of some young drivers, looking to make a name for themselves, including Schimmel – a former Junior champion. A good mixture of international talent fills out the S4 roster, which will be among the most competitive of the week. Also aboard the Aluminos chassis for Las Vegas includes TaG Master driver Billy Cleavelin, who won three straight years at the SuperNationals. Victories and podiums are the target for the following drivers running under the Aluminos banner;

* denotes driver aboard the Aluminos chassis