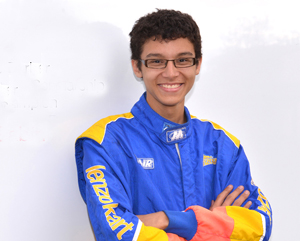 Luke Gabin, 19, from Australia has been crowned the champion of the 2013 Skip Barber Racing School Karting Scholarship Shootout.

Gabin’s globe trotting trip was well-worth the effort, as he can now count himself as the 17th Karting Scholarship Shootout winner, joining the ranks of elite racers like Ryan Hunter-Reay, AJ Allmendinger, Josef Newgarden, Conor De Phillippi, Spencer Pigot, and Conor Daly – who in their early days of racing all competed for the highly coveted prize.

“The shootout has been the highlight of my motorsports career, and I am extremely glad I have been given this opportunity by Skip Barber Racing School and my parents. It was a steep learning curve, but taking feedback from experienced instructors and applying it was very rewarding. The shootout was extremely competitive, and I’m looking forward to competing in a season of Skip Barber.”

“On behalf of the instructors and team at Skip Barber Racing School, I would like to congratulate Luke on his performance in the 2013 Karting Shootout,” said Michael Culver, CEO of Skip Barber Racing School. “Luke came out on top of a very impressive field of racers, and we look forward to working with him in 2014, as he continues on the path to achieve his goals in professional racing.”

Gabin developed a feel for the Skip Barber Formula 2000 cars and posted consistent session averages, earning the highest instructor score from the group.

All scholarships funds are spread out over each race event throughout the course of the 2014 season, and cannot be applied to only a few select events. Prizes are non-transferrable and the awards are subject to event rules, available on our website.