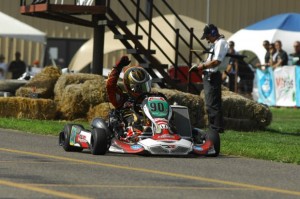 Brian Fisher is among the talent pool piloting a DR Racing Kart under the DRT Racing tent as the SKUSA SuperNationals XVII in Las Vegas.
(On Track Promotions – otp.ca)

There’s no arguing the fact that the karting landscape in the United States is constantly evolving. DRT Racing is a big part of this growth as they have been increasing their presence at major events throughout North America.  DRT is the leading importer of the DR Racing Kart, and they have been very focused on growing their dealer network from coast to coast.  This has proven to increase the chassis’ stature all over the entire continent as the DR Kart earned numerous victories and championships in 2013. DRT Racing will join the best teams in karting as their drivers compete on a temporary circuit built on the parking lot of the Rio All-Suites Hotel and Casino from November 20-24, when they attend the Superkarts! USA SuperNationals XVII.  The team will bring a full tent of DR Karts, the chassis designed by former world karting champion Danilo Rossi, for a solid line-up of DRT Racing team drivers for this prestigious Las Vegas event.

DRT Racing has been a force to be reckoned with on the SKUSA Pro Tour over the last few seasons, showing the best in the S4 Master Stock Moto class. Featuring the most seasoned of the shifterkart drivers, S4 will be one of the most competitive classes in Vegas. Texan Chris Jennings is riding a massive high into Vegas after coming out on top of championship fight in the Texas ProKart Challenge, one that was almost too close to call. Jennings, a former winner at the SuperNationals, will be among the contenders aboard a DR Kart. Back-to-back Rock Island Grand Prix Masters Shifter champion Lance Lane is set to improve on his previous best finish at the SuperNationals (12th). Lane looks to carry the success he enjoyed Labor Day weekend on the RIGP street course, coming back from a very hard wreck at the SummerNationals this past July to win the Masters Shifter class at the street racing classic.

Arguably one of the favorites for standing on the top of the podium come SuperSunday night is DRT Racing’s in-house engine guru Brian Fisher. The mastermind and developer of Fisher Racing Engines will arrive in Vegas as a championship contender in S4, sweeping the SummerNationals main events. Fisher posted the second quickest time in SuperNationals qualifying last year en route to a very respectable fifth place podium finish.  Considering his resume at this great event, ‘Fish’ is among the prime contenders for SuperSunday. Also racing with DRT Racing in the S4 class, aboard a DR Racing Kart, will be Stephen Flatt and Byron Rothenhoefer. Racing out of Atlanta, Flatt is a road racer with the DRT Racing team at WKA events. Rothenhofer will look to improve on his debut in Las Vegas last year, which saw him finish in the top-25.

DRT Racing will field one driver in the S2 Semi-Pro Stock Moto class this year in Las Vegas, and that driver will be up-and-coming hot shoe Skyler Finley. The young Texan is relatively new to karting, having left the sport of motocross to focus on four-wheel action. After spending time in BMX as well, the Finleys found karting and Skyler has found speed quickly. Finley made noise early in 2013 when he placed in the top-five in a loaded Stock Honda Light field at the Lone Star Grand Prix in Texas back in March. Finley’s trip to the SuperNats this November will be completely different from last year’s, as he moves up from the S5 Junior Stock Moto class to challenge the Semi-Pro Seniors in S2.

One step above Finley and the rest of the S2 field in Las Vegas is the headline S1 Pro Stock Moto category. Racing with the best of the best shifter kart drivers for DRT Racing again this year will be Josh Lane. His dedication and love for the sport is second to no one in the paddock, and Lane has already proved his speed on temp courses in 2013 – placing runner-up at the Lone Star Grand Prix and winning open shifter at Rock Island Grand Prix.

The addition of Daniel Formal to the team takes DRT Racing to the next level. The experienced and successful driver will pilot one of the new DR Racing Kart TaG chassis models in the competitive TaG Senior division. A former podium finisher at the event, Formal has been among the top talents in North America over the past few seasons. This year, he added a fourth US Rotax Grand Nationals title to his CV, winning the DD2 category, and backed it up with victory at the Pan-American Challenge last month. Testing with the team just last week, Formal is up to pace and has enjoyed working with the DRT program in the short few days together.

Team owner Don Guilbeault will multi-task again this year as he goes from assisting and helping all his drivers and tuners, to climbing behind the wheel in the TaG Masters category. Guilbeault, an accomplished road racer who has even spent time with NASCAR as a mechanic and tire changer, will join the already very talented list of TaG Masters in Las Vegas. In TaG Junior, DRT Racing supported driver Zack Dante will be gunning for the top spot. Dante competed in the California ProKart Challenge this year, where he recorded a ninth place finish in the final point standings.

DRT Racing and their team tent will be diversified more so than year’s previous with the addition of a pair of French drivers as Remy Perrigault will compete in KZ2 and Antonie Lepesqueux in DD2. Perrigault races aboard a DR Kart in KZ 125 races throughout France during the season. Lepesqueux comes to the SuperNationals as Rotax racer from France who has also competed in the LeMans Karting 24 Hour endurance race.

DRT Racing still has positions available for Arrive-and-Drive at the SKUSA SuperNationals XVII, but racers are encouraged to contact them immediately to confirm details. DRT Racing has two locations along the east coast, the original shop is located in Hudson, New Hampshire and the new warehouse, engine development and race team based out of the Bluff City, Tennessee. For more information, or to be part of the growing DR Racing Kart chassis dealer network, email info@drt-racing.com, phone 423-538-3838 or find them on Facebook

DRT Racing is your source for all your racing needs. Owned by experienced racer and successful businessman Don Guilbeault, DRT Racing provides all the components racers need to get on the track fast. DRT Racing has a successful resume in sprint racing to road racing, and is expanding the popular DR Racing Kart brand across North America as an official North American importer. Their in-house engine program, headed by Brian Fisher, provides race-winner powerplants for Stock Moto, TaG, Yamaha, and Rotax. Arrive-and-Drive programs are available in 2014 at the FWT, Texas LSGP, USPKS, WKA National Road Racing Series, SKUSA Pro Tour, and selected high-profile events on the year – including the SKUSA SuperNationals XVIII.