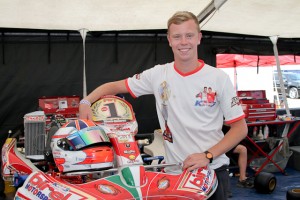 The two-speed DD2 category will make its SuperNationals debut this year with a solid international field set to battle outside the Rio. Reaching the maximum capacity, the draw of the first ticket to the 2014 Rotax Max Challenge Grand Finals has brought in a number of major ‘Rotaxian’ found at the front of the field from around the world. Both the overall winner, along with the top DD2 Masters driver in the field will be awarded the ticket courtesy of MAXSpeed Group – the United States distributor of all Rotax products. Ironically, 11 of the racers in Las Vegas will be coming straight from the 2013 Rotax Grand Finals, taking place at the NOLAMotorsportsPark on November 10-16.

Podium Predictions: With the international field like it is, narrowing the group to the best five is very difficult. First, we look at former world champions – Ben Cooper (Birel) and Pier-Luc Ouellette (CRG). Cooper has three Rotax titles on his CV, including last year’s DD2 title. PLO is the only North American driver to earn a DD2 world championship, winning in 2007 and 2011. Add in Belgian driver Xen De Ruwe (CRG) along with factory drivers Anthony Abbasse (Sodi Kart) and Paolo de Conto (Birel), and podium positions will be hard to come by. The top American of the group who has a fighting chance to stand on the podium is Daniel Formal (Tony Kart). A winner at the US Rotax Grand Nationals and the Rotax Pan-American Challenge, the Florida driver has seen some great results in the past at the SuperNationals.

Within the DD2 Masters category, at least 12 drivers will be eligible for the class within the class. The talent pool is just as strong, with two former world champions – Canadian Scott Campbell (CRG) and Christophe Adams. Along with them are fellow top Canadian driver Stuart Clark (Maranello) and US Rotax Grand Nationals runner-up Mike Jones. All four are fighting for the Rotax Grand Finals victory in NOLA, and set to battle for the DD2 Masters 2014 ticket in Vegas a few days later.

Wildcards: Some of the best karters in Rotax will be joined by two talented drivers from the motorsports world. IndyCar’s Sebastien Bourdais returns to the sport as the Frenchmen is set to pilot the French brand Sodi Kart under the Dallas Karting Complex tent. NASCAR and former Formula One driver Nelson Piquet Jr. makes a return visit to the SuperNationals, having competed in the SuperPro category. This year, he’s doing double duty by running the DD2 category as well. Robert Wickens is among the rising stars in Canada, racing in the Mercedes-Benz DTM program in Europe. He returns to race with his brothers Prime Powersports team aboard a Maranello chassis. 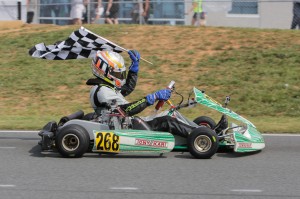 The second Rotax category is the Junior Max division, as 40 drivers will fight for a third 2014 Rotax Max Challenge Grand Finals ticket. Year after year, the Junior classes at the SuperNationals have provided some great drama throughout the weekend and 2013 should be no different. The field making the Rotax Junior debut at the SuperNationals is nearly half international drivers, similar to what we’ve seen DD2, with a good handful making the trek over to Vegas from NOLA.

Podium Predictions: Starting with the best from the US, Juan Manuel Correa (Tony Kart) has been among the top drivers in the country. Winning at the US Grand Nationals, he was among the top contenders fighting for the victory at the Pan-American Challenge. North of the border, Gianfranco Mazzaferro (Tony Kart) earned the Canadian national championship in August. Other top drivers from their countries include Austrian Thomas Preining (CRG), Columbian Christian Munoz (Tony Kart), Aussie Liam McLellan (Praga), German Philip Hamprecht (Kosmic) and Dutch driver Rinus Van Kaimthougt (CRG).

Wildcards: Taking on the international field is a good number of Americans that can make a name for themselves. Christian Brooks (Tony Kart) was the 2011 US Mini Max champion, and is creeping up the Junior ranks race by race. Florida driver Darren Keane (Tony Kart) is a regular challenger at the Florida Winter Tour, and could be found near the front in Vegas. Matt Solarczyk (Birel) is among the top Junior drivers in the east with Phillippe Denes (ART GP) among the rising stars in the west.