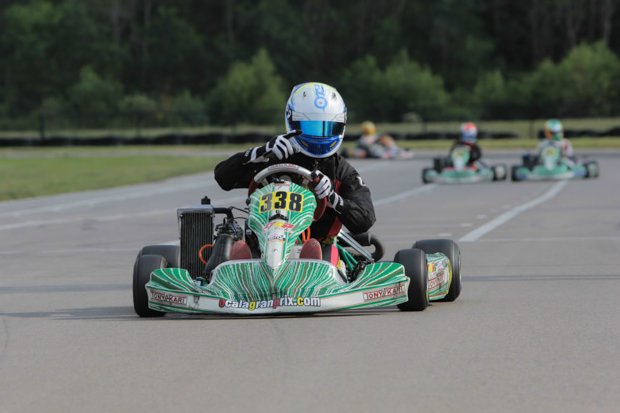 For the past several years, the Rotax Pan American Challenge has been a gathering of the top drivers from North America. This year however, the event was held one month before the 13th running of Rotax Grand Finals and on the same NOLAMotorsportsPark circuit. This prompted a number of top Rotaxians from around the country to make an earlier trip to take in the sounds and sights of ‘The Big Easy’, and prepare for the Rotax world championships. The same could be said for many of the Team USA members, as some used it to test out the spec chassis brands. Others however went for the glory and prestige of victory and that was no more evident then in the Senior Max category with three qualified drivers fighting it out for the victory. American Oliver Askew would triumph, earning another milestone victory of his rookie Senior season, and earning the October Driver of the Month honor.

The same three the crowd would watch during Sunday’s main event were the same on top after qualifying. Askew’s Ocala Gran Prix teammate Nick Neri – 2011 US Rotax Grand Nationals champ, edged out Oliver by a mere 11 thousandths for fast lap, with defending Rotax Grand Finals champion Charlie Eastwood in third. Rain hit the area however after qualifying, and while earlier heat races were run with wet weather Mojo tires, the track was not damp enough with majority of the field on dry tires for Senior Max heat one. With the semi-damp surface, turn one was rough for the front of the field, drifting wide seeing Askew drop outside the top-10. Fighting his way back, he was caught up in a last lap skirmish and sent off track, dropping to 22nd in the order.

The following day, the EKN TaG Driver Rankings #4 driver was involved in a wild race to settle the score in heat two. Leading at certain times of the race, he would eventually finish fourth. The third heat Askew would find a comfortable position of running out front, leading a train of karts for much of the race. Askew finished the race with the win, as Eastwood and Neri would finish behind him. That win gave him a big boost in the point standings to set the line-up for the prefinal, placing him seventh on the grid for Sunday.

Throughout the 14-lap prefinal, Askew kept charging to the front. By the final lap, he had passed Neri for position and earn the inside row two spot for the feature race. A great start to the main event put Askew at the pointy end of the field with Eastwood and Neri trailing. It looked to be setting up for a race long battle between the trio, but Askew was able to lay down consistent lap times to pull away from the fight for second. The margin of victory after 20 laps would be two seconds for Askew, putting in a similar performance to that of his United States Rotax Grand Nationals finish.

The victory has built up big confidence in Oliver and the entire country, as Team USA prepares to take on the rest of the world on November 10-16 at NOLAMotorsportsPark. The young OGP driver will also get his first taste of the SKUSA SuperNationals this year, traveling to Las Vegas after the RMCGF, competing in the S2 Semi-Pro Stock Moto division. If anything in 2013 has shown Askew, is that anything is possible. 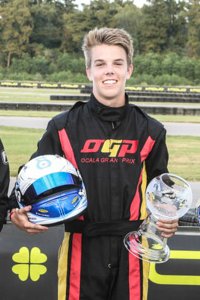 Chassis: Tony Kart EVK
Engine/Engine Builder: Ocala Gran Prix
Sponsors: Ocala Gran Prix, Mom & Dad
Series You Compete In: North Florida Rotax Max Challenge, Florida Karting Championship Series
Years Karting: 9
How did you get started in karting? My dad took me out to drive rental karts at PBIR for my 7th birthday and I’ve been hooked ever since.
What has been the high point in your racing career? 2013 Rotax Senior National Champion
What are your goals in racing? My goals in racing are to become a professional race car preferably driving an American LeMan’s Series LMP1 car or driving in the DTM series.
In a few words, how would you describe your driving style? Calm & collected
Funniest moment at the race track? When GFC, Tony Alvis, and I took the beamer through OGP’s fence.

What do you do when not at the track? Schoolwork, Train, Ping-Pong.
What are your goals outside of karting? My goals outside of karting would be to get a good education and to be involved in some kind of Motorsport no matter what.
What type of street car do you drive? VW Jetta Wagon
What type of street car would you like to drive? VW GTI
What are your pet peeves or things that irritate you? Anything messy or disorganized
What do you think could be done to improve the sport of karting? Karting will always be an expensive sport, organizers and teams should always and continue to look for ways to reduce costs for low budget families, there are too many drivers out there who are restricted to show potential talent.
What are your favorite aspects about the sport of karting? There is no other sport like karting. Karting allows you to prove yourself as an individual, also, the amount of competition in karting is second to none.

One thought on “eKartingNews.com Driver of the Month – October 2013 – Oliver Askew”