Heading into the biggest race of the season, the highly-anticipated updated standings for the eKartingNews.com TaG Driver Rankings have been produced. With a much longer than anticipated gap between published rankings, things have changed throughout the 400+ positions, putting regional, national and international karters against one another – based solely on numbers. The top of the order however remains unchanged as North American karting hits the biggest month of the season, with the running of the 17th annual Superkarts! USA SuperNationals.

California driver Louie Pagano remains as the top driver to beat, thanks to solid first six months of the 12-month period in this release of the EKN Driver Rankings. Last year’s runner-up at the SuperNationals carries a large amount of points toward the new Dallas Karting Complex/Sodi Racing USA driver’s total. The gap remains similar, with former US Rotax Grand Nationals champion Nick Neri (Tony Kart) gaining only a few points on Pagano following his third place performance at the Rotax Pan-American Challenge. Jake Craig (ART GP) amassed most of his points en route to the California ProKart Challenge championship, and on the SKUSA Pro Tour this season. While Pagano will be racing in Vegas, Neri is competing in S1 Pro Stock Moto as a former S2 SuperNats winner. Craig, who’s racing at the Rotax Grand Finals the week before, is scheduled to race at the SuperNationals as well.

Jumping up to fourth is the driver on a roll – Oliver Askew. The ‘On the Move’ driver back in August after his US Rotax Grand Nationals victory, the OGP/Tony Kart driver added another big victory to his Senior rookie CV with a solid performance at the Rotax Pan-American Challenge at NOLA. Askew’s points will remain unchanged as the young driver will have his hand at a shifterkart in Vegas, racing S2 to follow in Neri’s path. Also up to fifth with his points remaining unchanged until next year is Irishman Charlie Eastwood (Tony Kart). The 2012 Rotax Grand Finals champion contested the Florida Winter Tour this year, earning the championship and scoring solid points toward the EKN Driver Rankings. Adding in a runner-up at the Pan-Am event behind Askew, he jumped right behind him in the standings.

Holding strong in sixth is 2012 US Rotax Grand Finals champion Daniel Formal (Tony Kart). The former #1 driver continues to be a treat in every race he competes, and ‘4×4’ will be representing Team USA in the DD2 category, having won the US Grand Nationals and Pan-Am event. Making his way into the top-10 is Michigan driver Derek Dignan (FA Kart). The seventh ranked driver has been keeping his KartSport North America team busy, racing in 41 main events counted toward the EKN Driver Rankings. A couple big wins in WKA competition have propelled him into the top-10, and a good run in Vegas could help him climb higher.

SKUSA Pro Tour championship contender Andrew Zimmer (ART GP) falls to eighth, and is looking for his best performance at the SuperNationals to bring home a title back to Washington. A comeback run at the SummerNationals helped the double SpringNats winner back into the title chase. California racer Austin Elliott (Top Kart) remain ninth, and should be a factor at the SuperNationals, which could see him moving up the standings when the final tally is published in December. WKA champion Jonathan Kotyk (Tony Kart) is recovering from a huge wreck at the series finale in Mooresville, where he suffered a badly separated shoulder injury. Still recovering, Kotyk will close out the year with his point total intact, holding 10th. Dropping outside the top-10 include Matt Johnson (Tony Kart) and Mason Chelootz (Top Kart). 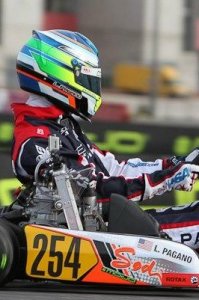 The past three months have been a change for the SoCal native, who recently moved to Texas to be part of the Dallas Karting Complex/Sodi Racing USA program. A longtime driver with the Birel brand and MRP Motorsport, Pagano is piloting the French-manufactured chassis over the last three months in preparation for what could be his biggest race in his karting career. Leading the SKUSA Pro Tour, Pagano is one who’s finished on the SuperNationals podium multiple times and 2013 could be the year he goes home with the SKUSA #1 plate. 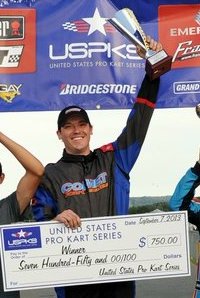 It was a great last few months to close out the season for veteran Mark Dismore Jr. The third-generation driver still showed he’s got the talent and speed to compete with the younger stars of the TaG category, earning two victories at the final two USPKS events to place him inside the top-five in points after a tough start to the season. To close out 2013, Dismore partnered up with IndyCar’s Josef Newgarden to score the victory at the recent RoboPong 200 at New CastleMotorsportsPark. Diz spent the last month working with a trainer to prepare for his 100 laps, and it showed on track. He will now celebrate the victory in Vegas, supporting all the Comet Racing Engines’ customers racing at the SuperNationals.