DFR driver will now compete as part of Team Canada 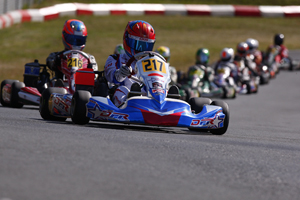 Devlin DeFrancesco will be part of Team Canada and take part in the Rotax Max Challenge Grand Finals in New Orleans.
(devlindefrancesco.com)

In breaking news announced last week, DeFrancesco Racing (DFR) driver, Devlin DeFrancesco has been awarded a ticket to the Rotax Max Challenge Grand Finals (RMCGF) as part of Team Canada. After dominating the Canadian Karting Championships in August, DeFrancesco was the victim of controversy that would see him relegated to the 19th position after scoring a dominant main event victory.

Receiving a phone call two weeks ago, DeFrancesco was notified that his nineteen-position penalty that was appealed trackside at the event was seen and overturned by officials of ASN Canada to a one-position infraction, ultimately awarding him the second position. Though not being given the win that he truly deserved, Devlin was ecstatic about the news of becoming a member of Team Canada.

“I am very excited to join Team Canada and race at the Grand Finals,” exclaimed Defrancesco. “I can’t wait to get on track in New Orleans.”

Since moving to the junior ranks, DeFrancesco has been a threat for victory each and every time he hits the track. Showing speed at the Rotax Max Challenge United States Grand Nationals, the DFR driver would garner the eighth position at the end of the weeklong event. Looking to redeem himself and improve on his results north of the border in Canada, the multi-time champion and sponsor savvy youngster had a career weekend taking the top position in each and every on track session. After being involved in a first lap incident of the main event that would see him fall to just inside the top ten, DeFrancesco had a spirited drive forward to cross the line with what he thought was another Canadian championship.

DeFrancesco continued, “I still don’t agree with the officials call and I know that I didn’t do anything that deserved such a huge penalty like I was given at the time or any at all. For the board to decide they should move me from the nineteenth position to P2 makes no sense. How do you give me back eighteen spots and not the one that matters most after my performance? Especially when it was on lap three and didn’t involve a driver in contention? Anyway, its over and I am glad that everything is final now and that I will be able to compete in the international event, especially with it being held in the United States.”

Devlin DeFrancesco would receive the great news just a few hours after undergoing reconstructive surgery on his wrist. After having two metal screws inserted into the bone just last week as well as a procedure on his neck to tend to the nerve damage, DeFrancesco will compete in New Orleans in only a few weeks time.

Undergoing the major surgery under the watchful eye of Dr. Dicke of Ortho Indy in Indianapolis, Indiana, DeFrancesco will be custom fitted with a carbon fiber cast by one of motorsports top surgeons, less than 48 hours before the event is set to begin.

Racing the Canadian Karting Championships was not the only event that DeFrancesco competed at with the injury. Following the event at Goodwood Kartways in which he dominated, Devlin traveled overseas performing above expectations. Running in the eighth position in the SuperCup main event, an incident caused by a fellow competitor would see him fail to finish. Traveling to Lonato shortly thereafter, Devlin proved his wet weather ability running at the pointy end of the field and eventually claiming a tenth place finish.

“Although it will be tough not having full use of my hand and wrist while I’ll be wearing a cast, its nothing compared to what I went through when I was a baby so I’m just pumped to be able to compete against some the world’s best and on American soil. I’d like to especially thank Dr. Dicke at Ortho Indy for the great care during the surgery and Geraldo Rodrigues from XYZ Motorsports, Tony Kanaan and Nick Mitchell at Octane Sports Development for getting me in to see the doctor so quickly. I would also like to thank my Mom for being there for me throughout the surgery.”

With drivers receiving equipment on Monday, November 11th, DeFrancesco will progress through the week of practice, qualifying and heat races with the hopes of a direct transfer to championship Saturday’s main event and a shot at becoming another Rotax Max Challenge Grand Final Champion for Team Canada.

For more information on DeFrancesco Racing, please contact Nick Mitchell via e-mail toNick@OctaneSportsDevelopment.com or visit them online at www.DFRUSA.com. For real time updates from DFR Racing and Devlin DeFrancesco live trackside, please follow them on Twitter at @DFR_USA, @DevlinD00 and @LachlanD03.