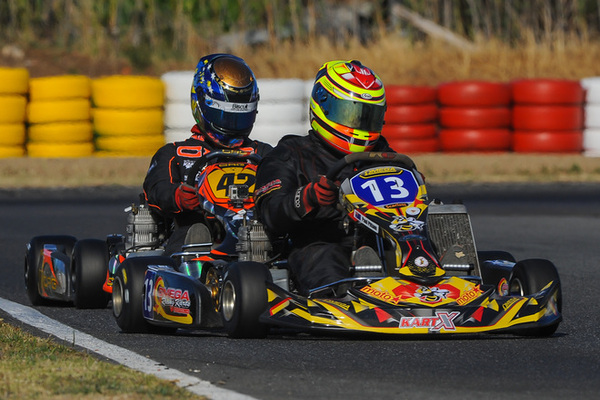 Pittam, who has now amassed an impressive 12 state crowns, proved victorious in the Leopard Heavy category ahead of Bundaberg driver Mason Barbera.

Barbera led the early running of the 21-lap final and appeared to have the measure of his pursuers, however, Pittam had other ideas aboard his locally made Omega kart. Pittam moved into the lead with a handful of laps remaining as Western Australian Matt Davis was charging his way to the front. The leading trio raced nose to tail for the final few laps before Pittam crossed the line two-kart lengths clear of Barbera to successfully defend the title he won last year in Mount Gambier.

“It’s a great feeling to be able to defend the championship that I won last year in a kart that is made here in South Australia,” said Pittam.

“All weekend, the Omega kart was a rocket. It was great racing out there with Mason and Matt. Mason showed us how it was done early in the final and gave me a bit of a wake-up call, so the win was made even sweeter when I was able to chase him down and pass him.”

Pittam’s fellow South Australian Leigh Cocker (West Lakes, SA) set the pace in the early part of the weekend before crossing the line fourth in the final. He was later elevated to third when Davis weighed in under the minimum weight post race.

Also competing in the Clubman Heavy category, Pittam finished second to Victorian Leigh Nicolaou, who was the only other driver to successfully defend a title won at the corresponding event last year.

Pittam was joined in the winner’s circle by fellow local Danny Errigo (Salisbury North, SA) who proved too good in the Clubman Super Heavy category. Errigo, who resides less than a ten-minute drive from the Bolivar Raceway, out paced Queensland Champion Mason Barbera, Blake Mooney, Andrew Cash and Mount Gambier’s Paul Dankowski for the win.

Denton leapt into the lead as the field raced into turn one and immediately opened a healthy lead. Hawkes then showed sensational speed to close the gap and moved into the top spot. Queenslander Jordi Marcon began to shadow the leading duo by mid race distance as Harry Hayek was on the charge into fifth spot after starting at the back of the field after failing to finish the pre-final. Despite Denton pressuring Hawkes in the final stages, Hawkes held on for the win.